A Boomer's Take on Living Small

Discovering the benefits of making the move

Back in the ’80s, our generation, if we’re to be totally honest, was more than a little obsessed with ostentatious displays of prosperity. Remember the maxim, “He who dies with the most toys wins”?

The American Dream, at the time, revolved, to a considerable extent, around the status acquired by owning a piece of land and the sort of four-bedroom McMansion that was sprouting up all over the suburbs of our abundant country.

One of this homeowner’s double-edged swords, it turned out, was a full-size basement. Into that musty cave could be conveniently deposited an unending stream of half-finished projects, old sweaters that “might come in handy for gardening one day” and boxes that had been moved, unopened, from the basement of the previous house. Out of sight, out of mind. But, at some point, it all had to come out again. Perhaps we had thought that another 10 years in a humid, dark place would miraculously rejuvenate all our old junk. The reality was a bit different. One day, finally cleaning out, we discovered the skeleton of a mouse in an ancient ice skate!

So, when is the right time to throw the engine into reverse and to start shrinking the pile of possessions that we have accumulated? What are the ramifications? Will we need therapy as we watch the family pingpong table head out of our lives forever, on the back of a Craig’s List buyer’s pickup truck?

It was all well and good when we had kids around. They, and their stuff, took up a lot of space. But, when they were gone in 2013, my wife took a teaching job in Rome for a year. We rented a one-bedroom apartment a few hundred yards from the Colosseum. It was small and didn’t have much furniture. “Bit sparse,” we thought, “but it’ll do for a while.”

But then a funny thing happened. For the entire year, neither of us once missed either the space or a single item of the mountain of miscellaneous belongings that we had left behind in the house in the States. When we got back to the U.S., it all seemed cumbersome and unnecessary.

First there was the lawn. I would sit around on a warm afternoon, dreading the moment when I would have to vacate my shady spot on the porch to go and push the mower around. It always looked depressingly scruffy and brown relative to the neighbors’ yards anyway.

Then there was the perpetual problem of hunting for reading glasses. In the apartment in Italy, there were only about three places where I could leave them. Back home I would have to charge up and down stairs repeatedly, systematically scouring through the endless sequence of possible spots, while my wife, waiting impatiently to go out, muttered something soothing like, “I don’t know why you don’t just put them in the same place every time, like I do.”

Cars were another thing: inspections, maintenance, insurance, licenses and the DMV. For a year, overseas, we had trundled around on public transport. It seemed so much easier.

A TIME TO UPROOT

So we decided to get rid of the lot of it. We sold the house, most of the stuff in it and the cars and moved to a small apartment in a little town near Lisbon, Portugal.

Friends took alternate approaches. One moved from a big house in New York to an apartment in the hills near Salt Lake City. He swears by the rule, “Anything you haven’t used in a year, throw out.” Another was the victim of a more extreme situation. His house in South Africa, and everything in it, burned. There was a severe drought. The fire brigade could only watch.

Apparently, there is more than one way to go about arriving at living small, but what these folks and I have in common is an extraordinary feeling of liberation, achieved only when you can carry your life around in a couple of suitcases.

International business consultant Richard Evans was once a competitive golfer in England. Now he enjoys what P.G. Wodehouse called “That perfect peace, that peace beyond all understanding, which comes at its maximum only to the man who has given up golf.” 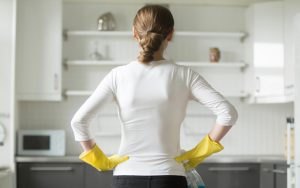