A Comedy, Perhaps a Tragedy, Part 3

Novelist David L. Robbins concludes a three-part series of columns about an unfortunate accident during a trip Turkey.

This is the conclusion of a three-part story. [Read the first here, and the second here.] I am on a bus deep in the Turkish countryside in the middle of the night. The bus has no bathroom. I, having carelessly drunk germ-riddled wage from a public fountain, have dire need of one.]

I stood in the doorway of a fast-moving bus, facing the angry driver. His foot was on the gas, my hand on my belt, preparing to hang my posterior off the bus if need be. Had this been a movie, it would have been a Western. I moved first.

He hit the brakes.

I whirled to find myself on the edge of a vast field. Between me and relief rose a low, ancient stone wall. I ran and vaulted it, grappling with my trousers. In relative privacy I squatted, and was done in an instant. I’ll spare your memory what mine cannot forget. I say only that, on the bus, I had been furiously reading Michener’s Tales of the South Pacific. Behind that wall, I put the opening chapters to use.

NOT EVEN A BOOKMARK COULD SLOW ME

The driver glared scimitars at me. I collapsed in my seat as the bus continued into the darkness. My seatmate Mohammad patted my arm.

Through the night, I wrestled against four more spasms, spaced an hour apart. When I could hold no longer I approached the driver. Each time he sighed, rustling the bristles in his black beard, then stopped. Again and again, there lay a field and a wall. I ran, leaped and got remarkably facile at undoing my pants in midair. I sped through Michener until I had no choice but to pass my bookmark. To this day, I have no idea what happened to the New Zealand pilot shot down over the ocean.

Dawn gathered. The others packed on the bus began to stir, a caged chicken clucked for sunrise. I’d exhausted most of my strength. Mohammad gave me his worry beads to occupy my clammy hands, until I fell into a fitful sleep.

I awoke to the devil on my shoulder chortling. The angel on my other shoulder begged. Get up, get up. Don’t do this, man.

The angel was pleading in Mohammad’s voice. Get up, man. Get up.

MY KINGDOM FOR A WALL

Apparently I had been moaning. Alert now, I found no strength to stand. My heart sank. Mohammad shoved me out of the seat, into the aisle. Go, man. Now.

The bus had stopped, on its own. The other folks watched as I walked handhold to handhold. The driver barked, Hayir, No. Like a zombie, emotionless, mindless, I swung the handle to open the door and stepped out.

I stood at an intersection, below a red light. In a town. No field, no wall. Michener in hand. I scanned my surroundings, a last flush of urgent energy in my breast.

The driver leaned on the horn. I squinted in agony, seconds left.

I saw my wall, taller than the ones in the fields but I was lighter now, desperate and winged. I devoured the distance, out of the intersection, across the sidewalk, up and over, my technique spot on. I landed not on grass but bricks. I unfastened, folded and released, producing little but fluids. The bus driver leaned on the horn.

Ten strides away, my mirror image squatted; a young woman, watering her garden. She glanced back at me across her shoulder. I finished, truly humiliated, nothing left of me or Michener. I rose; she did, too. The driver honked in the village morning. The woman, a kind face wrapped in a white silk scarf, approached. She emptied her watering can on my disgrace. She patted my arm, nodding over her wall to the howling bus. Hers was the face of my angel.

At midmorning, the bus pulled into my destination. I was feverish and wasted. The driver slowed to a stop. No one on the bus moved an inch.

I stood, quavering. Mohammad wished me luck. I teetered down the aisle. At the door, the driver inclined his head, a gesture of respect. I stepped down. There, just 15 strides away, waited my hard fought goal. The men’s bathroom.

I knew with certainty that I only had 10 steps left in me.

Dropping to my knees, I flung my hands in the air, defeated, done.

The devil came to collect. He hooted in thirty voices. The anguished angel cried out in thirty more.

I turned to the bus.

The riders were all giving and accepting cash, Mohammad and the driver among them. They’d been betting on me all night. 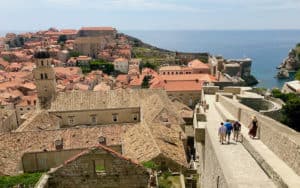