Home » Contributors » Randy Fitzgerald » A Fallacy, a Metaphor, and a Virus

A Fallacy, a Metaphor, and a Virus

Winding through a maze with worries in my pocket 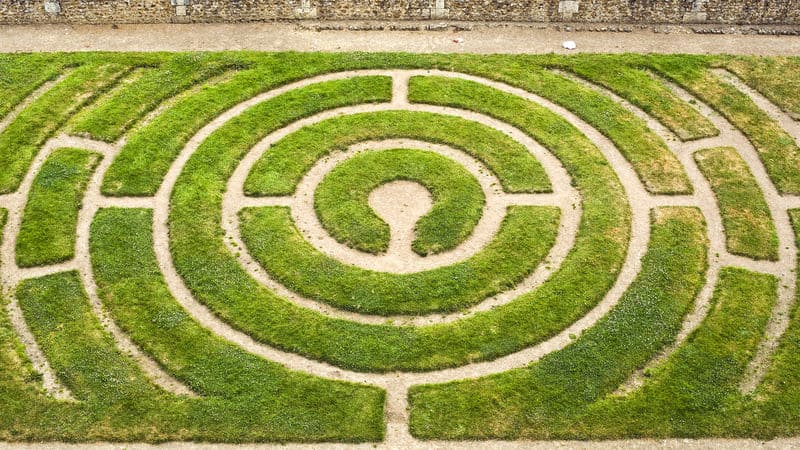 In the last issue of BOOMER, I wrote that Barb and I would be taking a month-long trip in April to Australia and New Zealand, and then a cruise back to the West Coast to L.A. At the end I said, “So unless something unexpected happens, Australia, here we come!”

Well, something unexpected happened for sure, and it happened to all of us. Like you, we have been staying close to home for a good many weeks now. Our trip to the other side of the world has downsized basically to the other side of the street. Our outings have been limited to walks around the neighborhood, enjoying the sunshine, the spring weather, birds, flowers, and chats with neighbors, from a distance.

I have been struck almost daily on these walks with the discrepancy between the normalcy of the outdoor world and the reality of the worldwide chaos. It almost seems as though some pathetic fallacy, as we literature teachers know it, is called for. The world of the coronavirus might make more sense if we had gray, dark days or rain every morning, instead of waking to a beautiful, familiar spring.

LEAVING OUR CARES AT THE LABYRINTH

When we first moved to our neighborhood, Ginter Park, about 35 years ago, Barb and I spent a lot of time exploring it. One street over from us, we found the cannonball left from the Civil War, anchored in the spot where it landed all those years ago, now the front yard of a beautiful 1920s-era home. We discovered a secret playground that few knew existed, hidden behind and between the homes on two parallel streets. We found the backyard of an artist, a marvelous creator of mobiles that turned and whirled and swayed with the wind in profusion, tinkling, thunking, making music of their own. And we found the labyrinth – and that one we’ve rediscovered and used again in recent days and weeks.

Across the way from our house is a walking track – two and a half times around is a mile, I think. And inside the track, out near the middle, is the labyrinth. For those who don’t happen to have a labyrinth within sight of their home, a modern-day labyrinth is a kind of maze of stones laid in an ever-winding circle of a path. If followed correctly, eventually leads you to a wide and welcoming center circle where you can pause to enjoy the accomplishment of getting there.

You may remember the story in Greek mythology of the original labyrinth wherein lived the monster Minotaur. Theseus went in, slew the monster and was able to get out only because the king’s daughter had given him a ball of thread to unwind on his way in, which he followed to find his way out.

For all these days of isolating and social distancing, I have been playing a game with the labyrinth. As I slowly walk around circle after concentric circle, in my mind I pick up my cares, one after another, and tote them along with me – most of them related to a world of plague and fear and unfamiliarity, but also to my concerns for an old friend facing cancer; a relative in a disappointing nursing home; a friend with a business that probably won’t recover from the recent chaos. Taking that slow circular walk – you can’t move fast – is a lot like saying your bedtime prayers; trying to remember all of those who need special care and attention.

When I finally get to the center of the labyrinth, I metaphorically drop every one of the worries and doubts and fears I picked up and carried along the way, leaving them at my feet. It’s all metaphorical, yes, but some days I think I can actually feel the weight leave my arms; often replaced with a sense of relief and peace – even joy.

I don’t know where the thread is that will lead us out of all this if we follow it. Possibly things will be a lot better by the time this BOOMER appears on the stands; if so, praise be. If not, the labyrinth is off Westwood Avenue and Loxley Road.

For more from Randy, check out his other BOOMER columns here!