A Stroll Through Stockholm

Sleek and progressive yet steeped in tradition, including the ‘fika’ 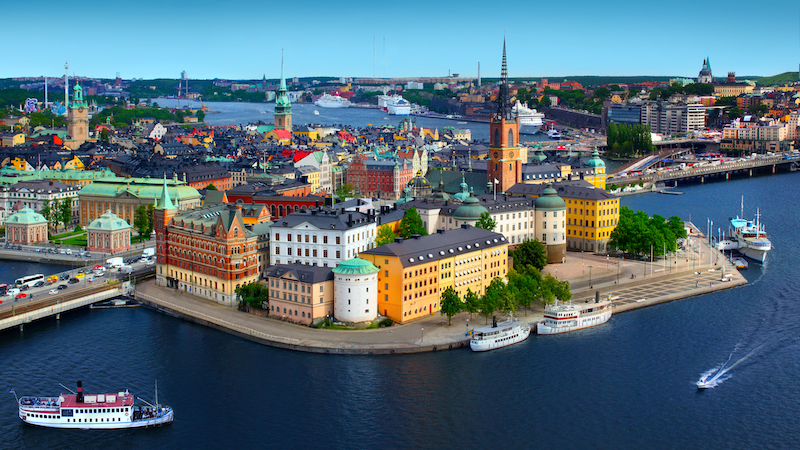 If travel writer Rick Steves had to pick a European city to call his home, where would it be? Steves takes us through Stockholm, for the traditional coffee break, the summertime military band parades, the museums, and other attractions in Gamla Stan, Stockholm’s old town.

When sightseeing my way through Stockholm – which has a longer list of must-see attractions than any city in Scandinavia – I take full advantage of the local tradition of the fika – Sweden’s ritual coffee break.

Swedes must drink more coffee per capita than people in just about any other country. The fika is to Sweden what the siesta is to Spain. While typically a morning or afternoon break in the workday, it can happen any time, any day.

Fika fare includes coffee along with a snack or pastry – usually a cinnamon bun. You can get your fika fix at practically any cafe or konditori (bakery) in Stockholm. While your coffee (usually with a refill) and cinnamon bun will never cost you much, you’ll see convenience stores advertising coffee and bun “to go” specials at a price no coffee lover on a budget can pass up.

With my cheap coffee and bun in hand, I grab a park bench to relax and enjoy some of Europe’s best people-watching. Moms and dads stroll past, pushing luxurious baby carriages or with little ones in tow.

Sweden is known for being very progressive. The country prides itself in being one of the most emancipated nations in the developed world – 47 percent of its parliament members are women. And while it’s still the capital of blond, Sweden is now also home to a large immigrant population.

Stockholm charms me with more than its liberal attitude and fika. If I had to call one European city home, it could be Stockholm. One-third water, one-third parks, one-third city, on the sea, surrounded by woods, bubbling with energy and history, Sweden’s stunning capital is green, clean, and underrated.

While progressive and sleek, Stockholm also respects its heritage. In summer, military bands parade daily through the heart of town to the Royal Palace, announcing the changing of the guard. They turn even the most dignified tourist into a scampering kid. With each visit, I’m sure to be at the palace around midday for the changing of the guard. The performance is fresh and spirited because the soldiers are visiting Stockholm just like you – and it’s a chance for young soldiers from all over Sweden in every branch of the service to show their stuff in the big city. Generally, after the barking and goose-stepping formalities, the band shows off for an impressive 40-minute concert. While the royal family now lives out of town at their summer palace (Drottningholm), the palace guards are for real. I thought they were just touristy soldiers until I tried wandering discreetly behind them for a photo and they snapped sternly into action.

While at the palace, you can “kill two flies with one swat” (as they say here rather than “kill two birds with one stone”) by dropping into the stunning Royal Armory. While royal armor and sword collections are a dime a dozen in Europe, Stockholm’s is the most interesting and best-displayed collection I’ve seen anywhere. The original 17th-century gear includes royal baby wear, outfits kings wore when they were killed in battle or assassinated, gowns representing royal fashion through the ages, and five centuries of royal Swedish armor – all wonderfully described in English. An added bonus is a basement lined with royal coaches (including coronation coaches), all well preserved, richly decorated, and thoughtfully explained by an audio guide.

When I last visited, Stockholm’s national museums (such as the Royal Armory, Nordic Museum, and Museum of Fine Arts) were free. You can generally tell which party is running the government by the city’s museum-entry policies (right-wingers charge for culture, left-wingers make sure it’s free for all).

The palace and its associated museums fill a corner of an island called Gamla Stan – Stockholm’s old town. The rest of the island is filled with antique shops, street lanterns, painted ceilings, and surprises. Until the 1600s, all of Stockholm fit on Gamla Stan. Today, it’s been given over to the tourists. Seemingly unaware that most of Stockholm’s major attractions are elsewhere, the tourists seem to wander mesmerized by the Old World quaintness of Gamla Stan’s main drag, Vasterlanggatan.

Stockholm has a long list of blockbuster attractions (including Europe’s best-preserved old warship, its first and best open-air folk museum, and the ultimate scenic island archipelago cruises). Any visitor who reads the guidebooks and brochures will be directed to these. But most of these will fail to remind you: When sightseeing Stockholm, it’ll all go better if you do as the locals do … and enjoy an occasional fika.