Columnist Randy Fitzgerald recalls a recent trip to none other than Aruba. 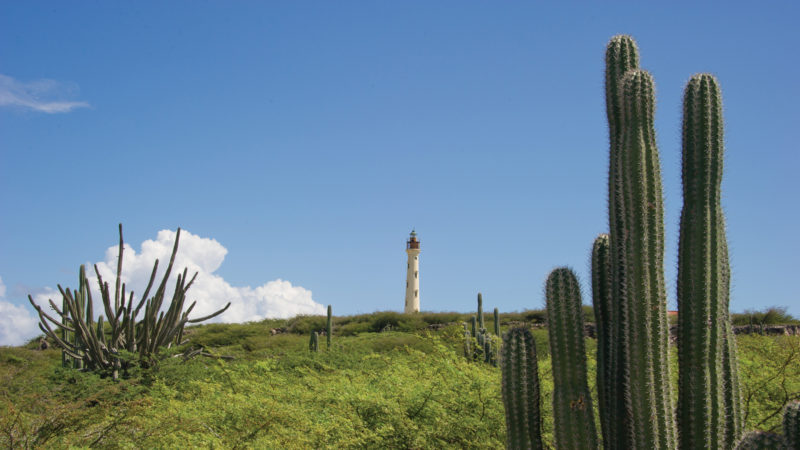 This year, Barb and I exchanged our Valentine’s presents early – like back in September. That’s when we took a lovely two-week trip to Aruba. That trip was also our Christmas presents – and our birthday presents for this year as well. We’d never been to Aruba, but a special cousin and her husband have gone there every year for the past 25 and are the biggest Aruba ambassadors ever. In September, they celebrated their 50th anniversary there, with a renewal of their wedding vows on Eagle Beach. We wouldn’t have missed it.

Aruba is a very different kind of resort island. First, the whole island is no more than 20 miles by 6 miles. And it’s basically a desert, unlike the naturally lush and colorful Caribbean islands or Hawaii beaches most of us are familiar with. The resort areas in Aruba are lush, but it’s manmade lushness. Many of the beaches have been dredged so you can walk way out into the sea without getting above your waist or being disturbed by waves – and still count your toes through the clear water. Aruba spoils you that way.

But the rest of the island is every bit as interesting. Much of it looks like Arizona, with similar vegetation, and some of it is totally barren, like the dark side of the moon. For a coral island, there are surprising stands of huge, unexplained boulders, sometimes standing in Stonehenge-like fashion. And as you journey through the countryside, you will quite often see cairns, those neatly piled stacks of ceremonial stones that over centuries have represented attempts at communication with others who pass the same way. You may not know exactly what is meant when you pass them, but there’s something universal and bonding in seeing them. There are also numerous grottoes and shrines in the hills of the island, as well as wild goats and wild dogs in abundance.

Aruba is an island of many faces, and to go there just for the beach and never leave a resort area is not to see its heart. Of course, we did the beach thing, too, though that part is quite expensive. Gas was $4 a gallon, and $20 hamburgers were not uncommon.

HOW THE ONE-PERCENTERS TRAVEL

Our accommodations were far more than we’re accustoming to spending, too. However we did spend our last night there in especially memorable fashion … in the $1,500-a-night Governor’s Suite at the Marriott Resort and Casino. It was worth every penny – but, needless to say, we obviously didn’t pay it.

Barb worked that miracle. She’s a great one for writing notes to management when she likes or does not like the way things are going. The Marriott was beautiful, with many kind and helpful people, but there were a couple of things that bothered her – one being a time-share salesman who wouldn’t quit. As paying guests, we didn’t want to be hassled to buy property. Another was a faulty fire alarm that went off twice in two days, once at 4 a.m. on our next-to-last night there.

Since she was up, dressed and fully awake at 4 a.m., Barb sat down and wrote a four-page note to the manager, citing four or five things that hadn’t gone well for us during our stay, as well as four or five things we had really liked. Sometimes it pays to complain.

The next day the front desk called and told us we had been given an upgrade to the Governor’s Suite for our last night’s stay, and staff would be up to help us pack.

So now here we are in the cold of winter, remembering the sheer elegance of how the one percenters live, as well as days of 100-degree weather and cooling trade winds, beaches full of thatch-roofed palapas, fierce-looking but pet-able iguanas, wild donkeys that stuck their heads in the car window to be fed, and hours climbing rocks and sitting in the surf with beloved kin and friends. Ah, memories – the best Valentine present ever!