The spirit of Catalunya 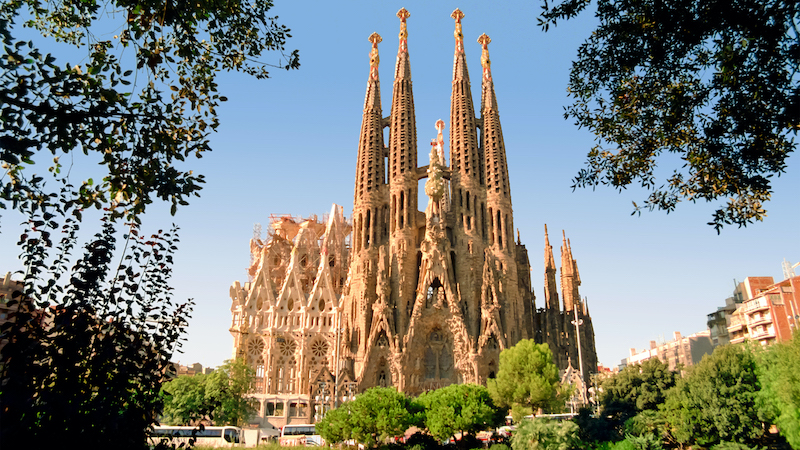 Sagrada Família, with bold, organic architecture and décor, a melting Glory Façade, skull-like Passion Façade, and a rainforest-esque interior, is among the most memorable sights in Barcelona. Also memorable are the people, proud of the spirit of Catalunya. Travel writer Rick Steves shares his favorite traits of the Spanish city.

Life in Barcelona is an engaging mix of Madrid-style love of life and Parisian elegance and taste. Spain’s second-biggest city is one of the hottest tourist destinations in Europe, with more than 7 million visitors a year, so its popular pedestrian boulevards can become human traffic jams.

In its day, this proud city has been a Roman retirement colony, a maritime power, a dynamo of the Industrial Age, and an urban poster child for modernism. Today it cobbles together all these elements into a one-of-a-kind culture.

Barcelona is the capital of Catalunya – a proud “nation without a state” and a region of Spain. The locals pride themselves on their different language and talk about independence. And with each visit, I hear more Catalan and less Spanish. Talking to my friends in Barcelona about the practicality of having their children learn Catalan – leaving them with a native tongue that less than 10 million people speak in an aggressive and global world – none of them questioned the notion. Of course they speak Catalan … they are Catalans. And they speak Spanish and English as well – they’re well-educated Europeans.

The iconic main square, Placa de Catalunya, sits at Barcelona’s center, dividing the older and newer parts of town. Below the square is the Old City, with the boulevard called the Ramblas running down to the harbor. This Catalan Champs-Élysées has long been a quintessential Barcelona experience. But with modern affluence and the rise of tourism (plus Airbnb-type short-term rentals allowing landlords to make more money while driving local tenants to the suburbs), the charm of the Ramblas is all but dead. The old men reading their newspapers, the bird and flower markets, and the local shops are now replaced by tacky low-end tourist shops.

Barcelona’s most historic neighborhood is Barri Gotic, with a 14th-century cathedral as its navel. Today, the area is a tangled-yet-inviting grab bag of grand squares, schoolyards, Art Nouveau storefronts, musty junk shops, classy antique shops, and street musicians strumming Catalan folk songs. While the recent lifting of rent control has caused many of the old-time shops to fold, thankfully the character of this quarter survives.

Above the Old City, beyond the bustling Placa de Catalunya hub, is the elegant Eixample district. Much of Barcelona’s Modernista architecture is found here, especially a row of colorful facades built at the end of the 19th century that compete for attention: Casa Batllo, Casa Amatller, and Casa Lleo Morera. Because the mansions look as though they are trying to outdo each other in creative twists, locals have dubbed them the “Block of Discord.”

The Eixample is also home to famed Catalan architect Antoni Gaudi’s La Pedrera (a.k.a. Casa Milà), with its much-photographed roller coaster of melting-ice-cream eaves. This is Barcelona’s quintessential Modernista building and Gaudi’s last major work before he dedicated his final years to the Sagrada Família.

Sagrada Família (Holy Family Church) is Gaudi’s unfinished masterpiece. It boasts bold, organic architecture and decor inside and out – from its melting Glory Façade to its skull-like Passion Façade to its rainforest-esque interior. Gaudi labored on the Sagrada Família for 43 years, from 1883 until his death in 1926. Since then, construction has moved forward in fits and starts. In 2010, the main nave was finished enough to host a consecration Mass by the pope. As I stepped inside on my last visit, the brilliance of Gaudi’s vision made for lofty worship in the nearly completed nave.

Today’s main challenges for this epic work-in-progress: construct the tallest church spire ever built, ensure that construction can withstand the vibrations from speedy trains rumbling underfoot, and find a way to buy out condo-owners to fulfill Gaudi’s vision of a grand esplanade approaching the church. The goal to finish by the 100th anniversary of Gaudi’s death, in 2026, may seem overly optimistic. But, with money from millions of visitors pouring in, it appears more obtainable as time goes by. I’ve long said, “If there’s one building I’d like to see in Europe, it’s Gaudi’s Sagrada Família church in Barcelona … finished.”

With attitude in its art, culture, and politics, Barcelona – in spite of its tourist crowds – is a place where you’re likely to wave the local flag and declare, along with its residents, “Visca Catalunya!”