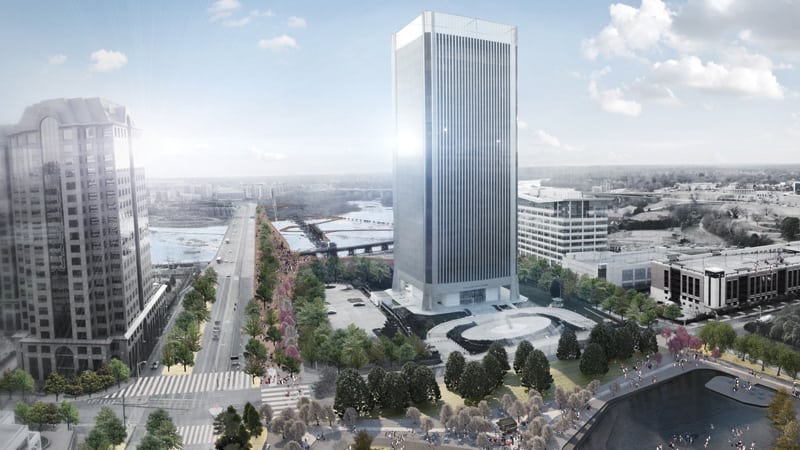 Like most bridges, Manchester Bridge simply provides a way for drivers and a few pedestrians to get where they’re going. But if Richmond BridgePark Foundation has its way, an add-on will serve a much greater purpose.

The Manchester Bridge spans the James River from downtown Richmond to Manchester. If you’re lucky, traffic is light as you drive over the bridge so you can take your eyes off the road to snag a quick glance at our favorite waterway. (We’ve all done it!) But of course, driving safely is important and you inevitably have somewhere to be, so the beauty of the moment is often lost.

The plan is to attach a park on a bridge – as the name implies. The proposed BridgePark, designed by the international architecture, design and landscape firm Spatial Affairs Bureau, will stretch beside the bridge and to surrounding areas, turning the span from an avenue into a destination.

In this urban oasis, you could enjoy the resident osprey, herons and eagles while the James River flows below, relishing the juxtaposition of earth beneath your feet and the skyline all around.

But the purpose behind the park goes deeper. During Richmond’s midcentury “white flight,” the Manchester Bridge was constructed to assist people in getting out of the city quickly, an aid in further dividing races and communities.

BridgePark is building upon that once-divisive bridge, turning it instead into a link that can be appreciated by locals and by visitors.

The Architects Newspaper, which covers news and inside reports to architects, designers, engineers, landscape architects and other parties interested in urban environments, reported on the project in September. “The project is moving into the final design stages over the next couple of years as work continues on a private fundraising campaign aimed at funding the plan,” the article said. “Backers of the BridgePark are moving toward getting the city to include the initiative in the city’s forthcoming development plans.”

“BridgePark is a long-term vision to create a unique public gathering space,” said Ted Elmore, president of Richmond BridgePark Foundation, at 2016 TEDxRVA. “It brings more people the beauty of the James River, connects neighborhoods and creates an entirely new way for us to engage with one another and connect with one another.”

More information, including opportunities for individuals and business to be a part of the project, can be found at BridgeParkRVA.com.