Home » From Our Readers » Cars Catholics and Guilt

“I quickly said a prayer under my breath…” 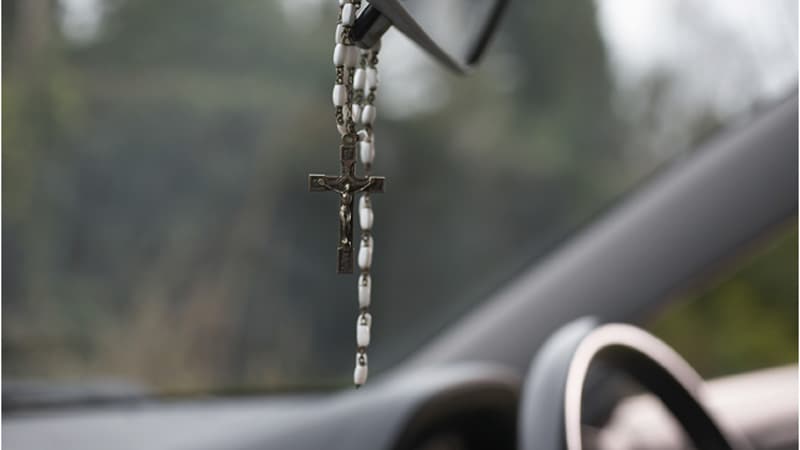 There I was sitting at the stop sign, cursing to the windshield since I just rapped my knee against the steering column as I moved my foot from the gas to the brake pedal. It was the day after Christmas, my 20-something daughter Elizabeth was in for the holidays, and as fathers often do I schemed up a situation where I could help her out and thus decided to take her car over to the local shop to get the oil changed.

Of course on the way back I was planning to fill up the car and get it washed, as just another small way to help this college student. It desperately needed a cleaning. Yes she was a college grad working on her Ph.D., but the inside of the car looked like that of a 16-year-old’s bedroom. No matter, I was approaching the next stop sign and had to move my knee from the gas to the brake again, and this time I was determined to avoid the steering column.

Ah, success, no pain as the car came to a stop. Elizabeth’s car was a Nissan Altima, a great starter car. One that she bought with her own money during her sophomore year while getting her undergraduate degree at the University of Virginia. It had served well on the many trips between Charlottesville and Richmond during that four year stint.

Oops, now I was approaching a red light along Monument Avenue, I deftly brought the car to a stop again without banging my knee. Good for me, two out of three not bad.

As I continued to drive her car to the repair shop, I couldn’t help feeling a little vane. Namely that I was enduring the indignation of riding around town in this small, underpowered, dated, dirty car for the day. Oh how so vain of me to think that way. But I knew eventually I would get back to riding in my oversized, gas guzzling SUV, or the Mercedes Benz sedan my wife drives. These old bones needed the comfort of heated leather seats that could be adjusted in countless ways to a personalized fit. With their spacious head room and sculpted interiors, being in the SUV or Benz was like being on another planet; a world so far away from the cloth seats and jagged, cheap plastic that currently surrounded me. Heck, this car didn’t even have a tinted rear view mirror!

Oh how vain, I had become.

But alas, due to my Catholic upbringing, the feeling of superiority lasted two, maybe three seconds before being replaced by the feeling of guilt. “How dare I think or feel that way,” rang thru my head like as if I just got hit by a baseball bat. After a few moments of remorse, I quickly said a prayer under my breath hoping that the Almighty might forgive me. Done, I thought, I did my penance and could now push the guilt aside.

Then, I thought to myself how many times my brain had automatically kicked in and said a prayer after I did something I felt guilty about. It was a built-in reaction like Pavlov’s dog. I thought, boy those nuns at St. John the Evangelist Elementary School really did a number on me. Oh no, I better stop and say a prayer for dissing the nuns!

But as I thought about it on my drive to the auto shop, I realized that I likely picked up this habit from my mother. Although she was a devout Catholic, she wasn’t the holy rosary-carrying, bible-quoting, fear-the-wrath-of-God kind of evangelical mom. Not that there wasn’t strong religious thread that ran through our family. We did have an aunt on my mother’s side who was a Sister of the Holy Order and a second cousin who became an ordained priest; all of her son’s did their terms as altar boys.

But in our family, religion was more of discipline, a means to establish those innate, core values that the good people of the world pick up in their youth. Neither Mom, Dad nor any of their nine children ever became outspoken advocates of the faith; rather we are the typical silent practitioners. Yes, we always said grace before any meals, genuflected when we approached an altar, knew what “Stations of the Cross” meant and knew how a rosary worked, but that was about it. None of us could cite a psalm or quote the Bible.

As I reflected back I found it interesting that religion was not a topic we discussed at meals or between ourselves. Never did I hear our parents say “.. what would Jesus do?” Religion was just an embedded part of life, like making our beds or brushing our teeth. To me it didn’t make me feel special or different. Much like going to school during the K-12 years, going to church or catechism classes was just something we did. We learned from it, just like we learned how to read and write and then we went on our way. By no means did it make me or my family feel superior, better or worse than anyone else that I knew at the time. The key phrase being “at that time.” I don’t know if I can say or believe in that judgment-free mindset with everything going on in the world in 2017.

With still a mile of stop and go traffic to go, I gave some more thought on how religion played a role in my early years. I recalled my mom being president of the Altar and Rosary Society, but that was when I was very young; probably less than ten. Of course, all of my brothers and I did become altar boys, and some even rose to take the roll of Mass Lecturers. But for me, after graduating from high school, the discipline of attending mass every Sunday faded. What was left behind from those formative years was the core beliefs of Christianity, the prayer reaction, the never-ending search for redemption and forgiveness, and that internal guilt button that would always be triggered when I did something bad – and even sometimes when I did something good. Funny how guilt can work both sides of that coin.

Darn it, I hit my knee again! Hitting that soft spot under your knee cap has a way of bringing you back to the present world and my thoughts shifted back to how I wanting to be back in my oversized SUV. But it also triggered a memory of how I had survived driving in beat up, rust bucket pickup trucks and other barely-legal cars throughout my high school and college years. No doubt if I die from lung cancer, it won’t be from the ten years working in the coal mines; it will be from the three or four years of applying and sanding Bondo to my F150 truck or the other junk yard machines my father or brothers brought home. I recalled how proud I was after I bought my first new car a few months after graduating from Penn State; the smooth ride from a vehicle that had both new tires, new shocks and windows that actually sealed properly. I looked around in Elizabeth’s car. It had power windows, a good stereo and air bags, several things my early year cars didn’t have. Of course I knew today’s cars were several orders of magnitudes safer, more fuel efficient and honestly built better.

As I pulled into the car repair shop, I conceded that yes, Elizabeth had done good in buying this car, she was clearly a few steps ahead of me when I was her age. But if I could only get her to keep it clean!

For a moment I thought, would it make me a bad person if I said a prayer under my breath for her, and hoped that someday she would inherit my Catholic guilt complex?