Tales of the Fitzgeralds’ farmhouse 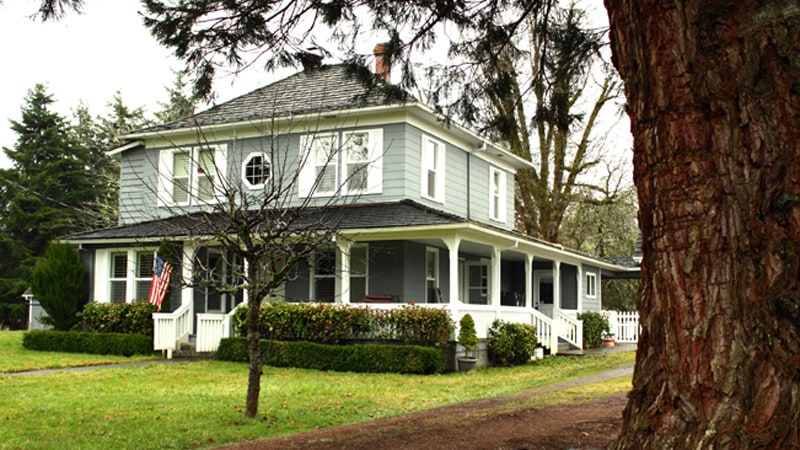 As best we can figure, the little farmhouse near Charlottesville that Barb and I inherited years ago from her father is now about 125 years old. It was built in the late 1800s by a nearby estate owner to provide better proximity to his sick wife’s nursemaid. The nurse and her husband, who had a wooden leg, lived in the house until both eventually died there. The wooden leg is important because we can still hear it clomping around sometimes in the dead of night. It’s not particularly troubling until we hear it on the stairs.

The house is an extremely modest dwelling, four small rooms and no distinguishing features – but of late it finally is entitled to some pretensions.

Awhile back we noticed that the living room floor had some unsound boards. They sank down when you walked on them and seemed spongy and unsafe. Our next-door-neighbor-but-one, Adele, is retired from a career of supervising building projects, and she knows her stuff. She found us a good, strong handyman to take up the old floor, as well as a first-rate carpenter (someone who has worked on occasion with the TV show This Old House). And then she found us something amazing: replacement wood that was left over from recent renovations at the University of Virginia Rotunda.

IT’S HARD TO BE CAVALIER ABOUT ROTUNDA WOOD.

You’d have to be a UVA alum, fan or Charlottesville native to appreciate having “Rotunda wood,” as we’ve taken to calling it, for the new floor in your farmhouse. The Rotunda is the heart of UVA and, in many ways, of Charlottesville itself. Even if you’re a Richmond Spider, as I am, you’d have to say this wood is gorgeous. It’s heart pine, wide boards, smells great. And if it’s good enough for the Rotunda, we are badly outclassed!

Our next big surprise came when the old flooring was taken up. Not six inches below it was … dirt! I should have known that an ancient farmhouse would not have a subfloor, but I had no idea the floor I walked on had been so close to the ground.

Barb asked ’Del how it had been possible for the fellow who had put insulation under that room a few years back to have crawled under there. “He dug a trench,” she said, “and kept his head down.” The insulation was not a good idea anyway, she allowed, since the groundhogs had had great fun tearing it to shreds.

We’re often plagued with groundhogs getting under the house, so I was a little worried that while the floor was open all those days, the whistlepigs would move in. I halfway expected that when we returned to the place this spring, I’d find one or more sitting in my lounge chair, partaking of the breakfast cereal or wearing my summer clothes. They just better not scratch up the floor.

We had asked ’Del as she and her crew worked to keep an eye out for something glistening in the dirt beneath the house. Back in the 1930s, when Barb’s mom and dad had lived in the house as a young couple starting out, Mrs. Goodman had slipped off her wedding band one day and let Betts, her toddler daughter, spin it on the floor. Of course, unlike the new floor, the old one had cracks, and the ring slipped into one of them and disappeared. Though Mr. Goodman crawled as far under the adjacent room as he could with a flashlight, the ring was never seen again. It would have been a nice find.

Anyway, with the new floor, we have something else to add to the farmhouse legend. I’ve always told visitors the true story that Art Garfunkel once visited us there (but that’s another column); now I can add that we have Rotunda wood on the floor. One more pretension and I can start charging admission!

Randy Fitzgerald was a longtime public relations director at the University of Richmond and columnist for The Richmond News Leader and later the Richmond Times-Dispatch. He then taught modern American literature at Virginia Union University until he retired in 2012. Contact him at rfitzger@gmail.com.