No cars, corporations, or dead fish 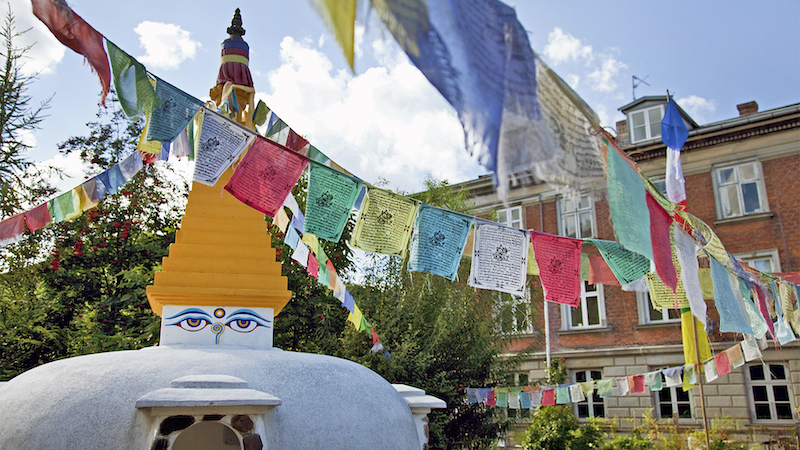 Is the alternative lifestyle in Christiania gritty and creepy or thriving and inspiring? In Rick Steves’ Europe, the experienced travel writer takes us to this Copenhagen squatters’ neighborhood for a peek and an opinion.

Strolling through Copenhagen, I come upon a parade: ragtag soldiers-against-conformity dressed in black making their way through the bustling, modern downtown. They walk solemnly behind a WWII vintage truck blasting Pink Floyd’s “Another Brick in the Wall.” I’ve never really listened to the words until now.

These “soldiers” are fighting a rising tide of conformity. They want to raise their children to be free spirits, not cogs. Painted onto their banner – an old sheet – is a slogan you see in their Christiania squatter community: “Lev livet kunstnerisk! Kun dode fisk flyder med strommen.” (“Live life artistically! Only dead fish swim with the current.”)

In 1971, the original 700 Christianians established squatters’ rights in an abandoned military barracks, just a 10-minute walk from the Danish parliament building. Half a century later, this “free city” still stands – a human mishmash of idealists, hippies, potheads, anti-materialists, and free-spirited children. The population includes 900 people, 200 cats, 200 dogs, 17 horses, and 2 parrots. Over 100 of the original squatters, seniors with Willie Nelson’s fashion sense, still live here. Most residents are employed: A third of the adult population works on the outside, a third works on the inside, and a third doesn’t work much at all.

Christiania sprawls just behind the spiral tower of Our Savior’s Church in the trendy district of Christianshavn. Welcoming visitors and even offering daily tours in summer, it’s become the second-most-visited sightseeing stop in Copenhagen (move over, “Little Mermaid”). Tourists react in very different ways to this place. Some see a haven of peace and freedom. Others see dogs, dirt, and dazed people. Some see no taboos. Others see too many tattoos.

Entering the community, I pass under the sign announcing that I am leaving the European Union. The main drag is nicknamed “Pusher Street” for the marijuana-selling stands that line it. Signs, while acknowledging that this activity is still illegal, announce: “1. Have fun; 2. No photos; and 3. No running – ‘because it makes people nervous.’”

As I walk down Pusher Street, I see Nemoland, a kind of food circus. At the end of the street, a huge warehouse called Den Gronne Hal (“The Green Hall”) does triple-duty as a recycling center, a craft center for kids, and an evening concert hall. Behind it, climbable ramparts overlook an idyllic lake and a forest that’s dotted with cozy – if ramshackle – cottages.

From Den Gronne Hal, a lane leads to a pleasant cafe, and beyond that, to the Morgenstedet vegetarian restaurant – a great place for a simple, friendly meal. A former barracks near the entrance of Christiania now houses Spiseloppen, a classy restaurant serving up gourmet anarchy by candlelight. Away from Pusher Street, I find myself lost in truly untouristed, residential Christiania, where the old folks sit out on the front stoop watching kids chasing ducks and flying with delight down homemade ziplines.

The free community has nine rules: no cars, no hard drugs, no guns, no explosives, and so on. While exploring this idealistic world, I realize that, except for the bottled beer being sold, there’s not a hint of any corporate entity. Everything is handmade. Nothing is packaged. That rejection of corporate values is part of what makes this community’s survival so tenuous.

Christiania has long faced government attempts to shut the place down. Back when real estate was much cheaper in Copenhagen, city officials looked the other way. But as the surrounding neighborhood gentrified, developers began eyeing the land Christiania’s hippies were squatting on. A certain intense breed of capitalist has a tough time allowing something that could be privatized and profitable stay public. The people of Christiania have learned to live with uncertainty.

Recently, I received an email from some readers who’d visited. They said: “We’re not prudes, but Christiania was creepy. It was too much for our family. Don’t take kids there or go after dark.”

I agree that a free city is not always pretty. But perhaps those parents were as threatened as much by Christiania’s anti-materialism as they were by its grittiness. Watching parents raise their children with Christiania values, I’ve come to believe very strongly in this social experiment. Certainly our world, so driven by aggressive corporate and materialist values, can afford to let people with alternative viewpoints have a place to be alternative. Christiania is a social flower that deserves a chance to bloom.