Home » Travel » Colmar in Alsace: France and Germany Mix it Up

An agreeable region to disagree over 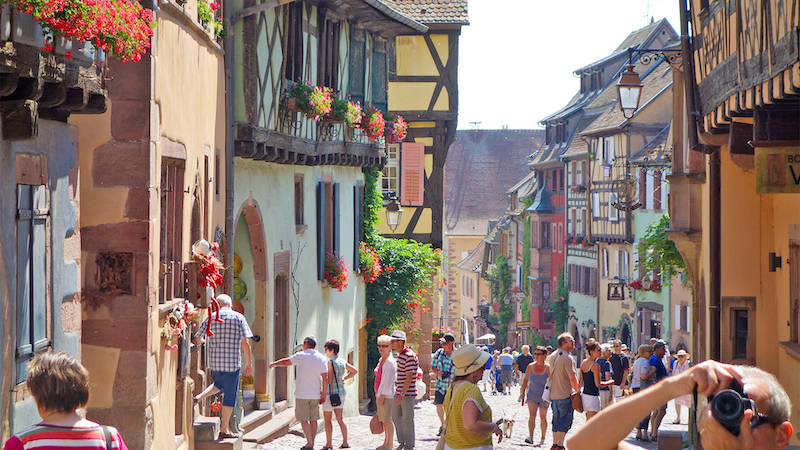 Travel writer Rick Steves takes us to Colmar in Alsace, explaining the long-time tug of war between Germany and France over the Alsatian province and highlighting the regional wines and the art-infused city of Colmar.

Biking down a newly paved but skinny one-lane service road through lush vineyards, I notice how the hills seem to be blanketed in green corduroy.

My Alsatian friend hollers at me, “Germany believes the correct border is the mountains behind us. And we French believe the Rhine – you can almost see it ahead – is the proper border. That’s why Alsace changes sides with each war. That’s why we are a mix of France and Germany.”

I yell back, “And that’s why you are called Jean-Claude Schumacher.”

The French province of Alsace is a region of Hansel-and-Gretel villages, ambitious vineyards, and vibrant cities. It stands like a flower-child referee between France and Germany, bound by the Rhine River on the east and the well-worn Vosges Mountains on the west. It has changed hands between the two countries several times because of its location, natural wealth, and naked vulnerability. Centuries as a political pawn have given Alsace a hybrid culture. Natives (with names like Jacques Schmidt or Dietrich Le Beau) who curse do so bilingually. Half-timbered restaurants serve sauerkraut and escargot.

Jean-Claude and I are exploring Alsace’s Wine Road. This Route du Vin is an asphalt ribbon tying 90 miles of vineyards, villages, and feudal fortresses into an understandably popular tourist package. The dry, sunny climate has produced good wine and happy travels since Roman days.

All along the road, degustation signs invite us into wine caves. We drop by several. In each case, the vintner serves sips of all seven Alsatian wines from dry to sweet, with educational commentary.

Colmar, my favorite city in Alsace, offers heavyweight sights in a warm, small-town setting. This well-pickled town of 70,000 sees relatively few American tourists but is popular with the French and Germans.

Historic beauty was usually a poor excuse to be spared the ravages of World War II, but it worked for Colmar. Thankfully, American and British military were careful not to bomb the half-timbered old burghers’ houses, characteristic red-and green-tiled roofs, and cobbled lanes of the most beautiful city in Alsace.

Today, Colmar is alive with colorful buildings, impressive art treasures, and enthralled visitors. Schoolgirls park their rickety horse carriages in front of City Hall, ready to give visitors a clip-clop tour of the old town. Antique shops welcome browsers, and hoteliers hurry down the sleepy streets to pick up fresh croissants in time for breakfast.

By the end of the Middle Ages, the walled town was a bustling trade center filled with the fine homes of wealthy merchants. The wonderfully restored tanners’ quarter is a quiver of tall, narrow, half-timbered buildings. Its confused rooftops struggle erratically to get enough sun to dry their animal skins. Nearby, “La Petite Venise” comes complete with canals and gondola rides.

The art of Colmar

Colmar combines its abundance of art with a knack for showing it off. The artistic geniuses Grünewald, Schongauer, and Bartholdi all called Colmar home. Frédéric-Auguste Bartholdi, who created our Statue of Liberty a century and a half ago, adorned his hometown with many fine, if smaller, statues. The little Bartholdi Museum offers a good look at the artist’s life and some fun Statue of Liberty trivia.

The Unterlinden Museum, housed in a 750-year-old convent, holds the highlight of the city – Matthias Grünewald’s gripping Isenheim Altarpiece. It’s actually a series of paintings on hinges that pivot like shutters. Designed to help people in a hospital suffer through their horrible skin diseases (long before the age of painkillers), the main panel – the Crucifixion – is one of the most powerful paintings ever. I stand petrified in front of it and let the vivid agony and suffering drag its fingers down my face. Just as I’m ready to sob with those in the painting, I turn to the happy ending: a psychedelic explosion of Resurrection joy. We know very little about Grünewald except that his work has played tetherball with human emotions for 500 years.

A hard-fought land on the conflicted border of Europe’s two leading powers, Alsace is also a powerful example of the high culture, cuisine, and art that results when two great nations mix it up.