Colorful towns aglow with wine, food, and remnants of tradition 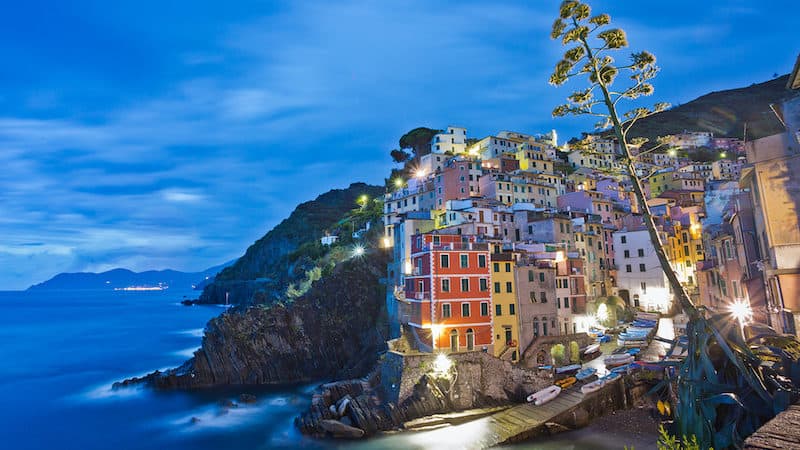 As we’ve had to postpone our travels because of the pandemic, I believe a weekly dose of travel dreaming can be good medicine. Here’s one of my favorite European memories from Italy’s Riviera – a reminder of the fun that awaits us at the other end of this crisis.

I cap the best day imaginable on the Cinque Terre with a glass of Sciacchetrà dessert wine on the breakwater. It’s midnight and the Mediterranean is darker than the sky. I scan the horizon for the bobbing lanterns of old-school fishermen seducing anchovies into their nets. But I see none.

During 40 years of visits, I’ve nursed a drink on this breakwater and seen the number of bobbing lanterns dwindle. The lanterns are gone now, as are many of the traditions … lost to the rising tide of modernity. But the weekly street markets still roll in, with the wives of fishermen selling their catch. And, after all these years, I’m thankful for this fragile yet surviving bit of the old Riviera and the community that keeps it vital.

The buzz I’m savoring is not from the wine, but from enjoying this world of ancient terraced vineyards, little pastel ports, rustic cuisine, and twinkling vistas. (OK, it’s also from the wine.)

Journey to the edge of yesterday

Resting between Genoa and Pisa, the Cinque Terre is the most dream-worthy stretch of Italy’s Riviera. Leaving the nearest big city, La Spezia, the train lumbers into a mountain. Ten minutes later, bursting into the sunlight, it arrives at the first of the five towns. Rolling from town to town, the train nips in and out of the hills, teasing you with a series of Mediterranean views. Each moment is grander than the last: azure blue tinseled in sunbeams, frothy waves hitting desolate rocks … interrupted only by the occasional topless sunbather camped out like a lone limpet.

Cinque Terre means “five lands.” This quintet of pint-sized port towns clings to an inaccessible stretch of coastline. Each is a well-whittled pastel jumble of homes filling a gully like crusty sea creatures in a tide pool.

These rugged ports, founded by Dark Age locals hiding out from marauding pirates, were cut off from the modern world until the arrival of the train. Today, the once foreboding castles protect only glorious views and the train brings hordes of hikers. To preserve this land, the government has declared the Cinque Terre a national park, collecting a small fee from each visitor. (The fees are intended to protect the flora and fauna and maintain the trails, but I’ve seen little evidence of that.)

Beyond the towns, vineyards with their many terraces blanket the mountainside. Someone – probably after too much local wine – calculated that the roughly 3,000 miles of terrace walls have the same amount of stonework as the Great Wall of China. Wine production is down nowadays, as younger residents choose less-physical work. But many locals still maintain their tiny family plots and proudly serve their grandfather’s wine.

I always eat well in the Cinque Terre. This is the home of pesto. Basil, which loves the region’s temperate climate, is mixed with cheese (half Parmigiano cow cheese and half pecorino sheep cheese), garlic, olive oil, and pine nuts, then poured over pasta. And the vino delle Cinque Terre flows cheap and easy. The sweet, sherry-like Sciacchetrà wine is served with a cookie. While 10 kilos of grapes yield 7 liters of wine, 10 kilos of grapes make only 2 liters of Sciacchetrà, which is made from near-raisins. Sciacchetrà is much stronger than regular wine, something to keep in mind if your room is up a lot of steps.

Traditions ring through the Cinque Terre as persistently as its beloved church bells – which remind residents of the days before tourism. The fishermen out at sea could hear the bells; the workers in the vineyards high on the mountain could hear them, too. In one town, the hoteliers tried to stop the bells for the tourists who couldn’t sleep. But the community nearly revolted, and the bells ring on.

The government, recognizing how wonderfully preserved these towns are, has long prohibited anyone from constructing any new buildings. That’s why the region has no big, modern resort hotels – something I appreciate. The lack of comfortable accommodations leaves the towns to the more rugged travelers – those content to rent a room in a private home or simple pensione – and we enjoy a land where the villagers still go about their business as if this was the very edge of the Earth.

Rick Steves (www.ricksteves.com) writes European guidebooks, hosts travel shows on public TV and radio, and organizes European tours. This article on Cinque Terre for Sciacchetrà wine and traditions was adapted from his new book, For the Love of Europe. You can email Rick at rick@ricksteves.com and follow his blog on Facebook.