A stroll through the Spanish region with travel writer Rick Steves 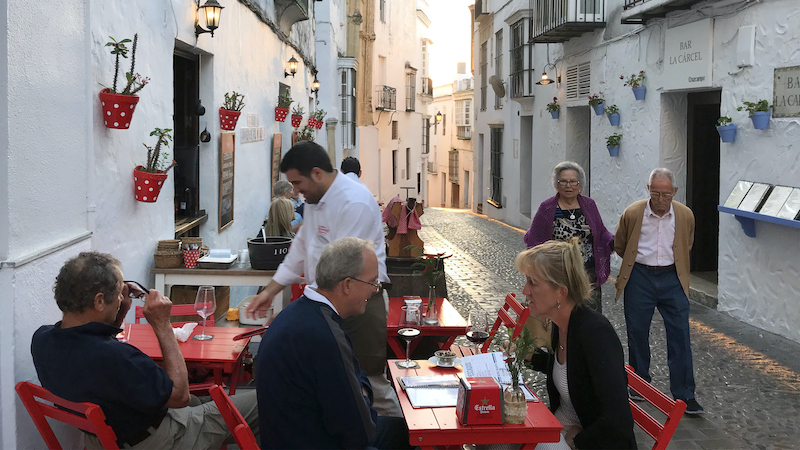 Travel professional Rick Steves takes us to the entertaining small towns of Spain’s Andalucía region: along the Route of the White Hill Towns, the narrow streets of Arcos de la Frontera, the foods at the market, and bull-fighting on the TV at a bar – quintessential Spain.

The American image of Spain is Andalucía: the home of bullfights, flamenco, gazpacho, and pristine whitewashed hill towns. This southern part of the country feels more quintessentially Spanish than perhaps anywhere else. When visiting this area, I always make a point to venture into what’s called the Route of the White Hill Towns (Ruta de los Pueblos Blancos), a charm bracelet of cute villages perched in the sierras.

Arcos de la Frontera makes a good starting point. Arcos is a classic hill town, blanketing its little summit with a mosaic of whitewashed buildings and a tangle of shady lanes. The labyrinthine old center is a photographer’s bonanza. I can feel the breeze funnel through the narrow streets – so narrow that drivers can only enter the town on one side and leave on the other. If you miss your stop, you need to drive out of town and circle all the way back to your starting point. The best advice: Park outside the old center and walk.

The entertaining market is my first stop. The pickle woman encourages me to try a banderilla, named for the bangled spear that a matador sticks into the bull. As I gingerly slide an onion off the tiny skewer of pickled olives, onions, and carrots, she tells me to eat it all at once – the pickle equivalent of throwing down a shot of vodka. Explosivo! The lady in the adjacent meat stall bursts into laughter at my shock.

Like the pickle section, the meat stall – or salchicheria – is an important part of any Spanish market. In Spain, ever since Roman times, December has been the month to slaughter pigs. After the slaughter, they salt and dry every possible bit of meat into various sausages, hams, and pork products. By late spring, that now-salty meat is cured, able to withstand the heat, and hanging in tempting market displays. Ham appreciation is big here. The word to know: jamon. When in Spain, I am a jamon aficionado.

Asking for top-quality ham, I get a plate of jamon iberico. While quite expensive, it’s a worthy investment. Made from acorn-fed pigs with black feet, it actually does taste better, with a bouquet of its own and a sweet aftertaste. I make a point in bars to order a small plate of it with my wine … it goes just right with vino tinto con mucho cuerpo (full-bodied red wine) from the Rioja region.

Around town, I like to peek discreetly into private patios. These wonderful, cool-tiled courtyards, filled with plants, pools, and happy family activities, are typical of the whole region. I also keep my eyes peeled for ancient columns tucked into building corners. Many are actually Roman, appropriated from their original ancient settlement at the foot of the hill; they were put up to protect buildings from reckless donkey carts (and tourists in rental cars).

I eventually make my way into a cool dark bar filled with very short old guys. Any Spanish man over a certain age spent his growth-spurt years trying to survive the brutal Civil War (1936-39). Those who did struggled. That generation is a head shorter than Spaniards of the next.

In the bar, the men – side-lit like a Rembrandt portrait – are fixated on the TV, watching the finale of a long series of bullfights. El Cordobes is fighting. His father, also El Cordobes, was the Babe Ruth of bullfighting. El Cordobes uses his dad’s name even though his dad sued in an effort to stop him.

Marveling at the bar’s cheap list of wines and hard drinks, I order a Cuba Libre for about $2. The drink comes tall and stiff, with a dish of peanuts.

Suddenly the room gasps. I can’t believe the vivid scene on the screen. El Cordobes has been hooked and is flung, doing a cartwheel over the angry bull’s head. The gang roars as El Cordobes lands in a heap and buries his head in his arms as the bull tramples and tries to gore him. The TV replays the scene many times, each time drawing gasps in the bar.

El Cordobes survives and – no surprise – eventually kills the bull. As he makes a victory lap, picking up bouquets tossed by adoring fans, the camera zooms in on the rip exposing his hip and a long bloody wound. The short men around me will remember and talk about this moment for years to come.

I end my walk at the best restaurant in town, where the proud owner, Maria, tells me about the day’s menu. As she pours my wine, I tell her that the man at the next table looks like El Cordobes. One glance and she says, “El Cordobes is much more handsome.” When I mention his recent drama, she nods and says, “It’s been a difficult year for matadors.”