Home » Lifestyle » Dave Lipp Does It All for His Community

You Name It: Dave Lipp

Doing a lot of a lot throughout his community 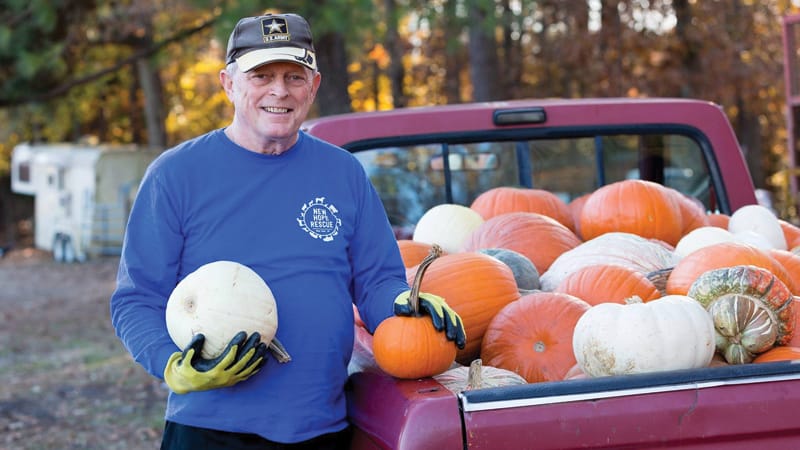 It means that in a few days, Dave Lipp will be arriving with a huge load of pumpkins from Chesterfield County. These animals go hog wild over pumpkins.

Lipp, known to some of his neighbors as the “mayor of Stonehenge,” has taken it upon himself to make sure leftover pumpkins in the neighborhood don’t go to waste.

“We took a little over 400 last year, and they were all gone by Jan. 1,” says Lipp, 73, who is in his fourth year of collecting pumpkins and hauling them to the animal rescue farm.

Cyclist, fitness buff, dog lover, handyman, Dave Lipp is something of a nonprofit charity/rescue squad/chamber of commerce all rolled into one.

“He’s an amazing volunteer for our CERT program,” said Jes Robison, who coordinates the county’s program. “He’s such a nice guy, such a joker, but he’s rock solid. I can depend on him for anything.”

A frequent volunteer, he has participated in police “active shooter” drills and has worked in fire department programs that check and replace smoke detectors and batteries in low-cost housing.

“One day I think I installed 18 smoke detectors,” he said.

“I don’t consider it a good day unless I’ve done at least one act of kindness,” Lipp says. “I’d much rather wear out than rust out.”

Ed Kelleher is a retired journalist and member of ROMEO (Retired Old Men Eating Out), where Dave Lipp is president.