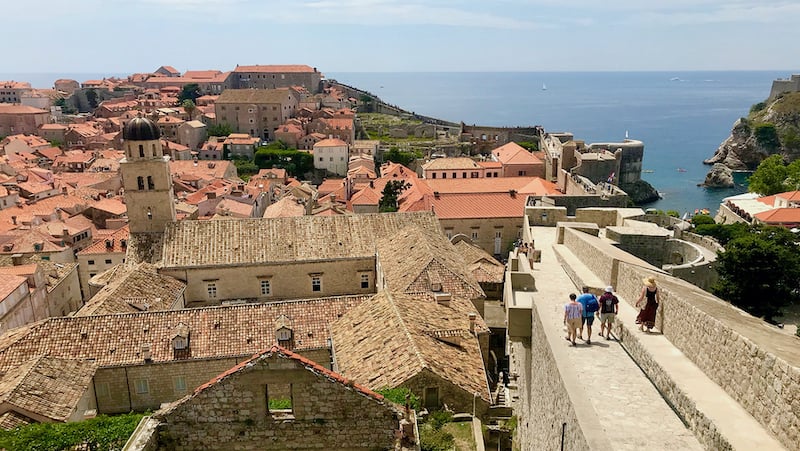 Dubrovnik’s walls reflect survival and resilience. As travel writer Rick Steves takes the reader on a stroll atop the walls, he reflects on the city’s attractions for tourists, its rich and sometimes painful history, and the physical and emotional rebuilding after the Croatia War of Independence.

As we’ve had to postpone our travels because of the pandemic, I believe a weekly dose of travel dreaming can be good medicine. Here’s one of my favorite European memories from the city of Dubrovnik in Croatia – a reminder of the fun that awaits us at the other end of this crisis.

Jostled by the crowds, I walk toward the still-stout medieval wall encircling Dubrovnik, deservedly known as the “Pearl of the Adriatic.” It’s an unforgettable mile-long stroll above the city. While constructed over many centuries, today’s impressive fortifications date from the 1400s, when they were beefed up to defend against the Ottoman Turks.

I jockey my way between cruise-excursion groups that have descended upon the town (these days about 800,000 cruisers stop here each year) and climb the steep steps to the top of the mighty wall. As I begin a slow, circular walk around the fortified perimeter, I’m bombarded with ever-changing views. On one side is a sea of red rooftops; on the other side, the actual sea.

As I approach the wall’s formidable gate – the walled city’s front door – I pause to enjoy a sweeping view of the Stradun, the 300-yard-long promenade that runs through the heart of the Old Town. In the Middle Ages, merchants lined this drag; before that, it was a canal. Today, it’s the city’s pedestrian boulevard: an Old World shopping mall by day and sprawling cocktail party after dark.

Farther along on my rampart ramble, I look down and see a peaceful stone terrace perched above the sea, clinging like a barnacle to the outside of the city wall. Generously shaded by white umbrellas, this is my favorite Dubrovnik escape, a rustic outdoor tavern called Buza. The name means “hole in the wall” – and that’s exactly what customers have to climb through to get there. Filled with mellow bartenders and tourists, Buza comes with castaway views and Frank Sinatra ambience. (When the sun sets, I get a special joy watching the cruise ships – whose thousands of passengers congested the city just a couple hours earlier – sail into the golden horizon.)

A tale of survival and resilience

Looking inland from my rampart perch, my eyes fall on a random arrangement of bright-and-dark-toned red roof tiles. In this complex and once-troubled corner of Europe, even a tranquil stroll comes with a poignant history lesson. After Croatia declared independence from Yugoslavia in 1991, the Yugoslav National Army laid siege to this town and lobbed mortars from the hilltop above. Today, the new, brighter-colored tiles mark houses that were hit and have been rebuilt. At a glance, it’s clear that more than two-thirds of the Old Town’s buildings suffered bomb damage.

Locals are often willing to talk openly about the bombing, offering a rare opportunity to grasp the realities of war from a survivor’s perspective. As I survey the rooftops, my thoughts turn to Pero, my B&B host, who spent years after the war turning the bombed-out remains of his Old Town home into a fine guesthouse.

When I arrived last night, Pero uncorked a bottle of orahovica, the local walnut liqueur. Hoping to write that evening with a clear head, I tried to refuse the drink. But this is a Slavic land. Remembering times when new friends force-fed me vodka in Russia, I knew turning Pero down was hopeless. My host had made this hooch himself, with green walnuts. As he slugged down a shot, he handed me a glass, wheezing, “Walnut grappa – it recovers your energy.”

Pero reached under the counter and held up the mangled tail of a mortar shell, describing how the gorgeous stone and knotty wood building he grew up in suffered a direct hit in the siege. He put the mortar in my hands. Just as I don’t enjoy holding a gun, I didn’t enjoy touching the twisted remains of that mortar. Pero explained that he gets a monthly retirement check for being wounded in the war, but he got bored and didn’t want to live on the tiny government stipend, so he went to work rebuilding his guesthouse.

I asked Pero to hold up the mortar for a photograph. As he held up the mortar, he smiled. I didn’t want him to smile, but that’s what he did. He seemed determined to smile – as if it signified a personal victory over the destruction the mortar had wrought.

It’s impressive how people can weather tragedy, rebuild, and move on. In spite of the terrors of war just a couple of decades ago, life here is once again very good – and, as far as Pero is concerned, filled with promise.