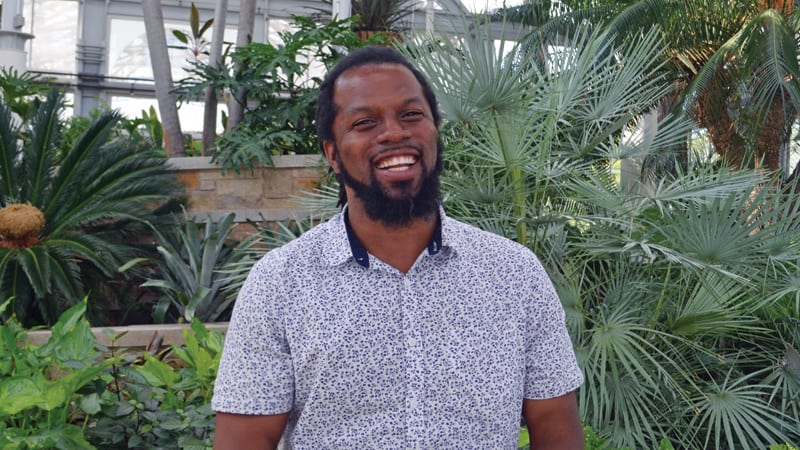 In Richmond, even amid an ever-growing bevy of breweries and a gaggle of grocery stores, thousands of people don’t have access to fresh food in their communities. Duron Chavis is working to change that, combining his years of experience as an urban agriculture activist with his efforts as community engagement manager at Lewis Ginter Botanical Garden.

“I got into this work to address issues of health disparity and food access,” says Chavis, 37, a native of South Richmond. That area of the city is marked with a dubious distinction, he says. “If you look at the map of food access in the city of Richmond, you’ll see the entire Southside is labeled a food desert, just about.”

The United States Department of Agriculture defines food deserts as “areas that lack access to affordable fruits, vegetables, whole grains, low-fat milk and other foods that make up a full and healthy diet.” These areas are often located in impoverished and low-income communities. A 2015 report by nonprofit The Food Trust found that in Virginia, more than 1.7 million residents – including nearly 500,000 children – live in underserved communities that have limited access to supermarkets where they could buy fresh foods. The Southside and East End are the most severe examples of food deserts in Richmond, says Chavis.

“Areas with a high concentration [of] food- and diet-related health problems, those are food deserts, too. Areas where people are participating in SNAP [Supplemental Nutrition Assistance Program] in higher numbers, they are food deserts,” he adds.

Chavis cemented his understanding of the link between food access and economic inequity about 10 years ago, when working alongside lifelong farmers. In 2009, he founded Richmond Noir Market, a farmers market pop-up series held on Saturdays in areas of the city suffering food insecurity. While selling the fruits and vegetables those elder growers hauled to the city each week, Chavis says, the men and women imparted their wisdom and inspired him to create sustainable food access programs.

“I remember one time, a farmer from Brunswick County asked me, ‘Why do we grow lawns? Why do we grow a quarter acre of grass instead of the foods we eat every day?’” Chavis says the question was a profound one and helped him turn his questioning inward. “Here I am, in my 20s at the time, and here’s this guy coming from 40 or 50 miles away, bringing vegetables into the city to sell to people who don’t have access to healthy food … This man is 70 years old; I’m in the prime of my life. If he can bring these crates of kale and potatoes and corn every week, why shouldn’t I be making sure his efforts reach the people who need it most? What can I do to carry this on and keep it going?”

From there, Chavis’ work evolved. He compounded his methods of promoting food security from hands-in-the-dirt urban farming and advocating for agricultural and health equity change, to overseeing the development of urban greening projects in the Richmond region. His lens widened; he says he tried to “find ways to bring the conversation about lack of food access even closer to the communities impacted by it.” He worked as director of community engagement at Renew Richmond and headed its RVAFARMS program, an effort that taught marginalized community members how to grow food and created an urban market to sell their produce. In 2014, he became inaugural director of the Harding Street Urban Agriculture Center, a project by Virginia State University that transformed a recreation center into an indoor farm.

Over the years, many questions have framed his mission, Chavis says. “How can we teach people where their food comes from and how to grow and sell food locally? How can we connect small-scale farmers that might not be in the urban center to urban center residents and businesses? How can we educate people about the correlation between food access, poverty and racism?”

AN AVENUE AT THE GARDEN

Chavis realized that a Richmond institution whose roots reach back to 1895 was asking the same questions. “The community itself can provide the answers to food access problems,” says Chavis, “and this is something Lewis Ginter [Botanical Garden] recognized.” In 2016, Chavis joined the Lewis Ginter team as community engagement coordinator; his main role was then and still is helping the Garden to form relationships with the community, especially people who live in food deserts, and empower them to create positive, lasting change in their communities.

“These communities do have assets, they do have value, they do have skills and knowledge; we are helping them to build on what’s already there,” says Chavis.

Twelve to 15 adults are accepted into the 12-week program each cycle, which includes both classroom and experience-based learning components, indoors and outdoors.

The program has created two projects so far, says Chavis: “One is a community garden at Sixth Mount Zion Baptist Church in Jackson Ward, and the other is in Fulton,” at Powhatan Community Center. In addition to urban agriculture’s main benefit of providing food, Chavis says the program does social good, too.

“In a lot of the areas [in Richmond] where food access is limited, there’s a lot of streetscape, lots of asphalt and cement, and a lot of blighted, dilapidated buildings. If you transform that landscape by planting a garden or a little grove of trees in public spaces, you encourage the community to come outdoors and connect with each other.” The plain, old aesthetic beauty of green spaces also plays a crucial part in boosting property value in neighborhoods, says Chavis. “It boosts your pride in where you live.”

Next up, Ginter Urban Gardeners will focus on neighborhoods in the Southside. “Swansboro, Manchester, Blackwell – we’re trying to put more green spaces south of the James,” Chavis says of the next cycle of the program, which starts Aug. 8 at Hull Street Library. Chavis initially designed the trainee classes to be diverse in terms of ethnicity, socioeconomic status, profession and age; this cycle will continue that standard. Additionally, “We’d like to work with organizations that already exist in these communities, and long-term residents,” says Chavis. “It’s about partnership and empowerment, versus a prescriptive ‘Here, let us solve this issue for you’ mentality. We’re not doing anything unless the community is equally partnering with us, period.”

Other upcoming Lewis Ginter initiatives under Chavis’ purview include community storytelling sessions. The goal is for Garden staff and volunteers to learn from community residents and leaders how they are using urban ecology and green space to engage their neighborhoods. “We’re going to be doing a lot of listening,” says Chavis.

Despite the loss of locally loved Ukrop’s grocery stores in 2010, there is no shortage of marketplace options in many parts of the Richmond region. The next time you need to stock up on milk, bread, eggs and produce, you will probably have the choice to shop at food retailer newcomers Wegmans, Lidl, Aldi and Publix or at larger, established chains, like Kroger and WalMart. A glaring contrast exists between that bounty and the parts of the city without a single store offering farm-fresh eggs or just-picked produce within walking distance.

“The food abundance that’s in the West End, it’s almost shameful when you think of the lack of access to basic healthy foods we have in the Southside and East End,” says Chavis. “So, the conversation needs to turn to equity, and how to share our resources so that everyone has access. We have to be intentional about it.”

Samantha Willis is an award-winning freelance journalist based in Richmond, whose writing focuses on art, culture and history. Samantha contributes to a variety of regional and national publications, including Richmond Magazine, Style Weekly, the Richmond Times-Dispatch and Glamour. SamWillisWrites@gmail.com