Columnist Randy Fitzgerald recalls an experience which required the help of ... the Skunk Whisperer. 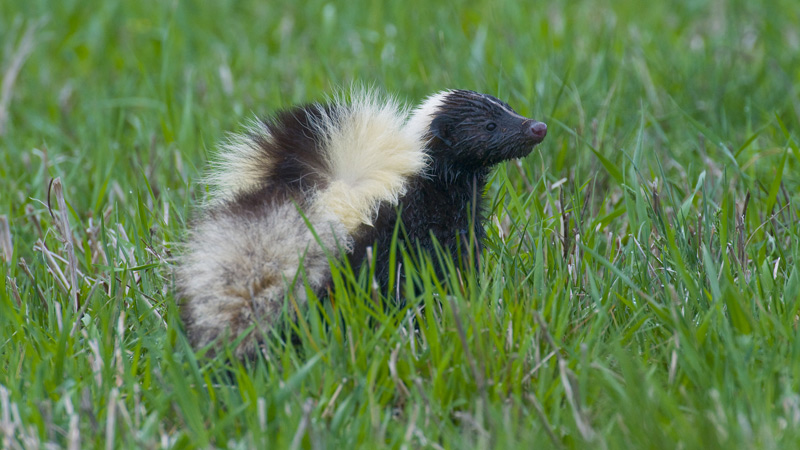 Barb’s sister Betts, who lives near our little farm near Charlottesville, called a while back to say a groundhog had dug a huge hole and was living under our farmhouse – a threat since groundhogs can collapse an old home if they dig around the foundation.

So Barb tracked down our Have-a-Heart trap, looked online to find out what groundhogs eat, loaded the trap with half an apple, green grapes and a good helping of cabbage, and headed to C’ville.

Before she even got back home, Betts called to say the trap had worked.

“Wonderful,” I said. “We caught the groundhog?”

How does one get a skunk out of a cage? The obvious answer is, very carefully. But in this case, Betts contacted a wildlife fellow she’d heard of, and he said, “No problem. That will be $60.”

The next day Betts and her husband went to watch the extraction, from a safe distance near the smokehouse. They reported that the fellow walked up to the cage, squatted down right by it, and began to talk quietly to the skunk. Betts couldn’t hear what he said, but after a few minutes, he slowly reached over and opened the cage door. The skunk fled.

Then she heard the Skunk Whisperer yelling, “Oh, no, don’t. Don’t go in there!”

And the skunk darted directly into the groundhog hole. Now both Punxsutawney Phil AND Pepe Le Pew were living under the farmhouse.

“My sister is going to kill me,” Betts told the Skunk Whisperer. “How will we know when these guys come out, so we can block up the hole?”

“Easy,” says the SW. “Just put a lot of flour on the ground and you’ll see their footprints when they leave.”

So Betts goes home, gets a 5-pound bag of flour and spreads it around the opening of the groundhog hole. Before she can get back in her car, the skies open up. A deluge comes that would have frightened Noah.

Betts calls. “You have a backyard full of gravy,” she says. “If we could catch this groundhog, we could have a heck of a Southern dinner.”

Two weeks and FOUR captured groundhogs later – Pepe was never heard of again, by the way – things are calm at the farmhouse.

But stick with me.

A week or so later back in Richmond, Barb and I are sitting at breakfast when we hear something chomping in a space between the kitchen stove and the cabinets.

“Do you hear that?” Barb asked.

Barb goes over and carefully removes one by one the trays that she keeps in that space. One tray, two trays, three out – no mouse. (You may well ask at this point, “Where is old Randy while this is going on?” Old Randy is still sitting at the table, hand on chest like Redd Foxx in his “I’m coming, Elizabeth” pose.) So she reaches down … lifts the last tray and screams. A corresponding scream is heard from someone at the kitchen table.

“A rat!” Barb yells, leaping into a chair.

Chapter 3 is a long one, but an hour or so later, the baby possum ends up hiding in the stove drawer under the broiler pan (probably not a smart move, possum — you’re in the South, too). The drawer ends up on the back porch. The possum explores the porch for a while (see pic) and eventually goes out the screen door into the world.

Barb thinks he must have come in inside a box of old toys she brought in from outside. As to where he went, my guess is that he’s now living under the house.