A new outlook in the Old Country 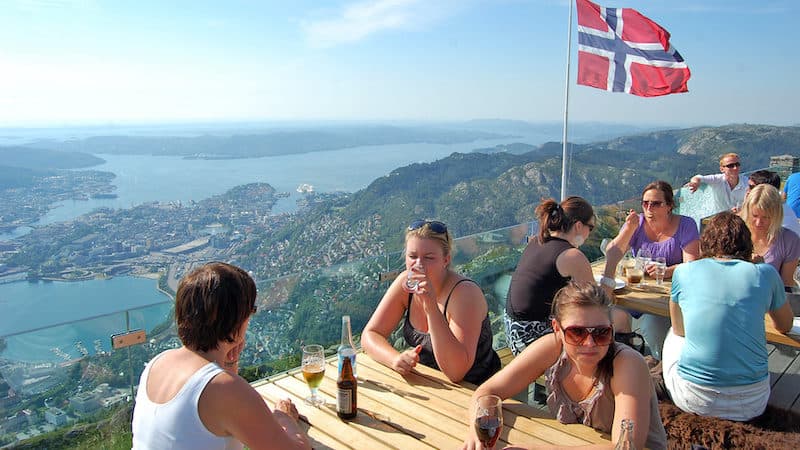 Rick Steves tells of expanding cultural horizons in Norway, where he learned to celebrate different cultures and to embrace a Norwegian philosophy of contentment.

As we’ve had to postpone our travels because of the pandemic, I believe a weekly dose of travel dreaming can be good medicine. Here’s one of my favorite European memories from the land of my forefathers, Norway – a reminder of the fun that awaits us at the other end of this crisis.

I’ll never forget my first trip to Europe. I was a gangly 14-year-old, dragged to the old country by a conspiracy of grandparents and parents solely to visit strangers who happened to be Norwegian relatives. I didn’t want to go. It just made no sense.

Jet lag wasn’t the problem. It was teen culture shock: No Fanta. No hamburgers. Far beyond the reach of my favorite radio station. Their “Top 40” had nothing to do with my “Top 40.” But after a few days I was wild about Solo (Norway’s orange pop), addicted to the long and skinny polse wieners, and enjoying new music. Noticing stunning women … with hairy armpits … I began to realize that our world is intriguing, and exploring it can be endlessly entertaining.

Norway is both breathtakingly scenic and expensive. It’s long and skinny – the distance from Oslo to its northernmost point is greater than from Oslo to Milan – and sparsely populated, with less than six million people. It’s never really crowded with tourists, either.

Visiting the house where my great-grandmother was born, I imagined the courage it must have taken to leave Norway and her entire family for America a century ago.

Sitting with my cousins on their living room floor in 1969 to watch the Apollo moon landing, I began to see the world differently. Hearing them translate Neil Armstrong’s words (“Ett lite skritt for et menneske, ett stort skritt for menneskeheten”), it dawned on me: That first big step was more than just an American celebration. It was a human accomplishment.

In Oslo’s Vigeland Park, I was grossed out by the nude statues by sculptor Gustav Vigeland. But I also experienced an important revelation in that same park that I share every chance I get: As I watched towheaded kids splashing with their parents in a fountain, I realized those parents loved their kids as much as mine loved me. This planet is home to billions of equally precious children of God. Travel was causing me to think bigger. And it was prying open my hometown blinders.

The next time we visited Norway, we looked up our ancestral roots. My grandfather, famous in the 1930s in Leavenworth, Washington, as a rowdy ski jumper, was a Romstad. So although my last name is Steves (after a step-grandfather), my blood is Romstad. That branch of my family comes from a scenic valley called Gudbrandsdalen.

These days, I don’t visit Norway just to read my family name on tombstones. The roots I seek are also cultural. It’s stimulating to learn about different social systems (many of which confound Americans). A friend in Oslo introduced me to the ideas of Norwegian philosopher Erik Dammann, who in the 1970s started a movement called “The Future in Our Hands.” His book by the same name lit a political fire in my belly that burns to this day. Dammann argued that a successful society can rise above materialism and that being content with your material wealth is a virtue. Dammann (and Norway) helped me imagine a society where consumption was not the goal. Norwegians are almost evangelical about their belief in organizing society for the benefit of all. City halls here are as grandly and lovingly decorated as churches.

Norwegians are talented linguists. I speak only English. Of all the places in Europe that I’ve traveled and worked, Norway has been the easiest place to communicate. Not long ago, I was at a cousin’s dinner party with a dozen people in Oslo. Out of deference to me, it was agreed: Everyone would speak English.

The topics were fascinating. One man, an author who had just written a book on Franklin D. Roosevelt, talked with me about the intricacies of American post-WWII politics. Two new parents gently debated the various ways to split their paid maternal and paternal leave (standard in Scandinavia where, for the father, it’s use it or lose it). People seemed very content. It was a house full of chatty Norwegians just loving their salmon, shrimp, and goat cheese.

Sure, Norway is an oasis of warmth and love because I’ve got family there. But I also appreciate the chance to rein in my Ameri-centricity. I admire a smart and creative land where well-being is not preceded by the word “material.”