There's just something about a waterfall 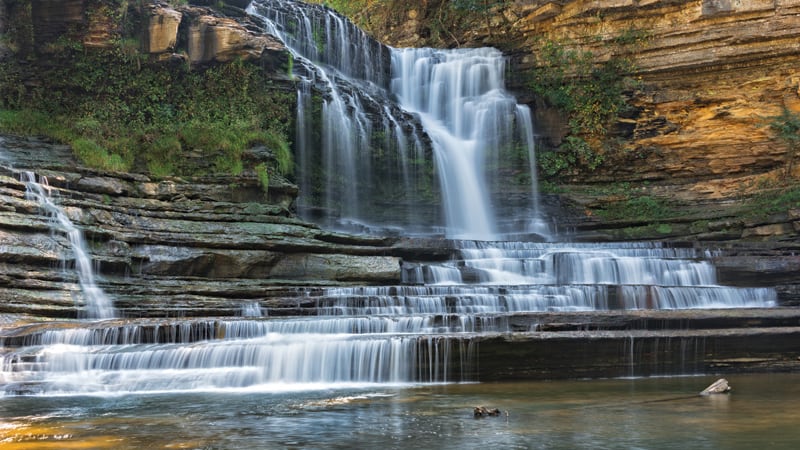 Boasting more than 100 waterfalls, the Upper Cumberland Area has one of the highest concentrations of waterfalls in the United States. Located on the low side of the more-than-20,000-square-mile Cumberland Plateau, much of the rain that falls on the plateau drains into the Upper Cumberland. The water pours over the Cumberland escarpment, creating ribbons of white froth and the soothing tones of tumbling water.

While some of these falls are in remote areas, most are within a short walk from a parking lot or road, and one can be viewed from your car. This suggested five-waterfalls-in-five-hours itinerary includes some of Upper Cumberland’s favorite falls.

The two-drop waterfall at Cummins Falls State Park is the eighth-highest waterfall in Tennessee. Blackburn Fork plunges 50 feet into a pool, then cascades 25 more feet into a second pool. Branded as one of the top-10 swimming holes in the U.S. by Travel & Leisure, Cummins Falls allows visitors to enjoy the cool waters of the plunge pool while viewing a beautiful waterfall. 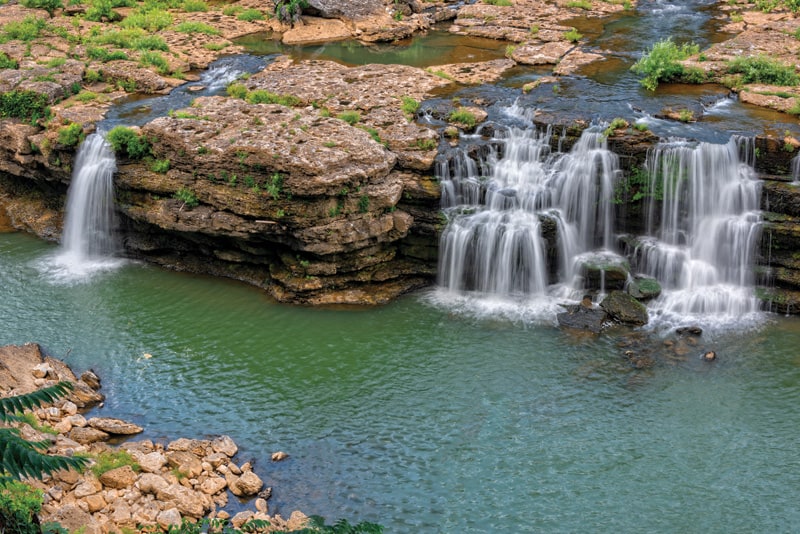 At Burgess Falls State Park, a horizontal pinnacle of rock splits the Falling Water River at the top of the plunge. From any angle, the falls are breathtaking. After a 136-foot drop, the river continues a short distance into Center Hill Lake, making the bottom of the falls approachable by kayak from the Cane Hollow Access point. At three-quarters of a mile, the trail to the main falls is the longest hike in this day trip. Easier access can be granted if you ask the ranger, but you will miss a smaller falls if you don’t take the trail.

Barely 21 miles south, the Twin Falls overlook at Rock Island is one of the area’s most spectacular waterfalls. The water pours from caves in a hillside and cascades 80 feet into the Class V waters of the Caney Fork River. Seemingly unaffected by drought, the falls has roughly the same volume year-round. Even in the driest summers, when other falls wane, you can count on Twin Falls to be spectacular. A little-known plus on this waterfall: it is spectacular during a full moon. The white froth created by the cascade glares bright when the moon is high. Twin Falls was created accidentally in 1925 when a dam was built on the Caney Fork River. A newly formed lake backed water into the nearby Collins River, and the rising water found its way through caves in the hillside. What a beautiful mistake. 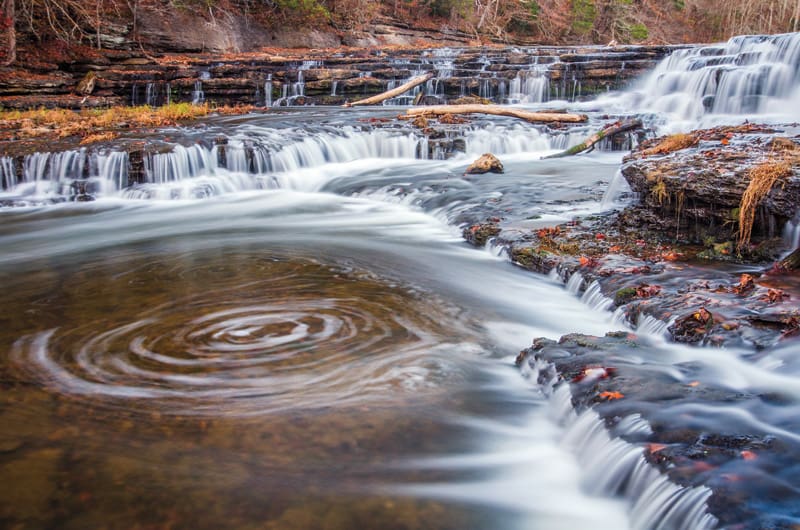 Less than seven miles by road and still in Rock Island State Park, Great Falls lies curiously upstream of Twin Falls yet downstream of the dam that created the latter. M.C. Escher could not have produced a more confusing combination. The Class V waters that flow over Great Falls makes a great backdrop for the thousands of whitewater kayakers who come to Tennessee to try one of kayak-pro and watercraft-maker Eric Jackson’s favorite runs. This whitewater stretch has been the site of three international kayak competitions. If you’re lucky, you’ll get to witness a daring kayaker making the 30-foot vertical drop.

The parking area for Lost Creek was created by Walt Disney filmmakers to get filming equipment into the sink for the 1994 version of The Jungle Book. This waterfall has no incoming or outgoing stream. The water emerges from a cave, drops 60 feet and appears to be absorbed by the rocky soil below. A series of well-laid steps built into the hillside make the 800-foot trail accessible to many. On the opposite side of the giant sink is one of the largest cave entrances in the state. While descending to the falls, you will experience a drastic temperature change from the air emerging from Lost Creek Cave.

A day of exploring soothing waterfalls surrounded by inspiring natural scenery and invigorating activity, with the quiet town of Sparta waiting to receive you afterwards – what’re you waiting for?

Marvin Bullock is president of the Sparta-White County Chamber of Commerce in Tennessee.