Life and death matters when hawks drop in 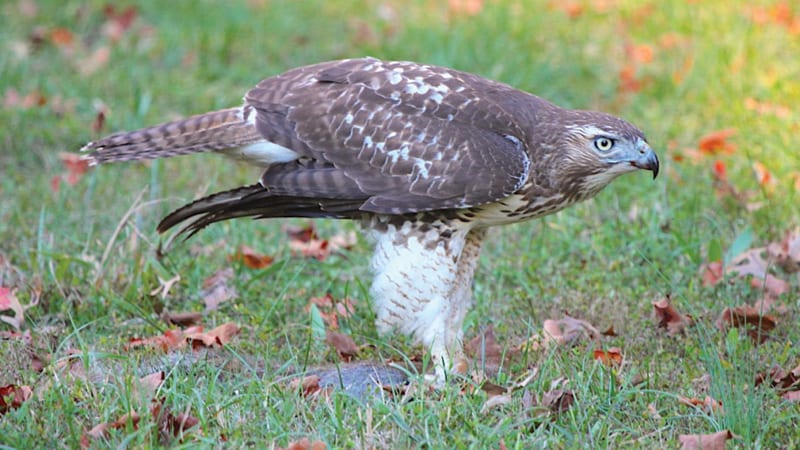 Around the time of Richmond’s first winter snowfall, our backyard birdlife should surge with nearly a dozen species lining up to dine at suet, sunflower and peanut feeders. Unlike constant bickering around feeders in the spring, the winter birds like hawks usually remain calm and civil.

Last year in mid-December, two unexpected avian visitors dropped into my backyard. A sharp-shinned hawk (a.k.a. “sharpie”) and red-shouldered hawk appeared out of nowhere and became temporary squatters. We enjoyed a bittersweet two-hawk holiday season with many disruptive incursions into the backyard. Birdlife quickly fled from the feeders and remained alert and wary of the two large interlopers.

Our two visitors had distinctive physical appearances and different modes of hunting.

A red-shouldered hawk is a large chunky bird with chestnut-colored horizontal bars across its chest. Around the backyard, it typically perches on a power line or atop a neighbor’s fence post. It will sit motionless for long periods of time, sending a misinterpreted signal that all is well in nature’s realm, long enough to entice hungry backyard birds back to feeders.

Perhaps they know that red-shouldered hawks’ preferred food group is rodentia and that they only occasionally prey on birds. These hawks are especially fond of squirrels that meander about our gardens and under feeders.

Often, as birds feast in the apparent calm, a foraging squirrel can be totally unaware of the stationary predator overhead, and when the hawk spies a fluffy, tail-twitching target the pursuit is quick. It hurtles downward in a short vertical arc to nab the unaware prey before it can scamper away. When pursuing a backyard bird, the much-larger raptor is not nearly as nimble and is less apt to successfully nab a fleeing target.

Sharp-shinned hawks are much trimmer and have long vertical brown streaks along the chest and stomach. Their aerodynamic bodies are built for speed and agility, and a sharpie hunts with stealth and cunning. They dine mainly on small birds such as sparrows and robin-size birds but will take small rodents and even moths. While most sharpies follow migrating birds southward, the remaining ones find our backyard feeders irresistible.

Sharpies have more covert hunting tactics than red-shouldered hawks, often perching on tree limbs near the trunk, where they’re completely hidden. They rely on surprise, speed and maneuverability. A feeder bird can be completely flummoxed when a sharpie unexpectedly bolts from its concealed perch just a few feet away.

You’ll see a pursued backyard bird zigzag toward a dense hedge or bush, the time-tested strategy to reach safety. But the sharpie is faster and will twist and turn in hot pursuit behind its prey. It’s all a matter of distance and luck whether predator or prey prevails. In our small backyards, sharpies often have to give repeated chases to score, but in more open spaces, the sleek and speedy hawk has the edge.

Sharpies often cruise around our neighborhoods a few feet off the ground, hoping to surprise and flush small birds foraging on the ground. On an early morning neighborhood walk, I once encountered a sharpie gliding along an alleyway just two feet above the surface, scanning left and right, hoping to spook a ground-feeding bird.

AS QUICKLY AS THEY COME…

Our two neighborhood hawks quietly vanished just as mysteriously as they had appeared. Typical of wide-ranging winter raptors, each had appraised the hunting potential after carefree feeder birds had become wary and less susceptible targets and decided to move on to greener pastures.

If you’re lucky enough to have a hawk or two stake claims to your backyard this winter, welcome these temporary guests and enjoy the spirited chases that have notoriously unpredictable outcomes.

Jerry Uhlman has been writing about birding and travel for 20 years, including his Flyways & Byways column in the Richmond Times-Dispatch and his book, A Birder’s Guide to Metropolitan Richmond. Flyways@verizon.net