Covert and overt home-building habits 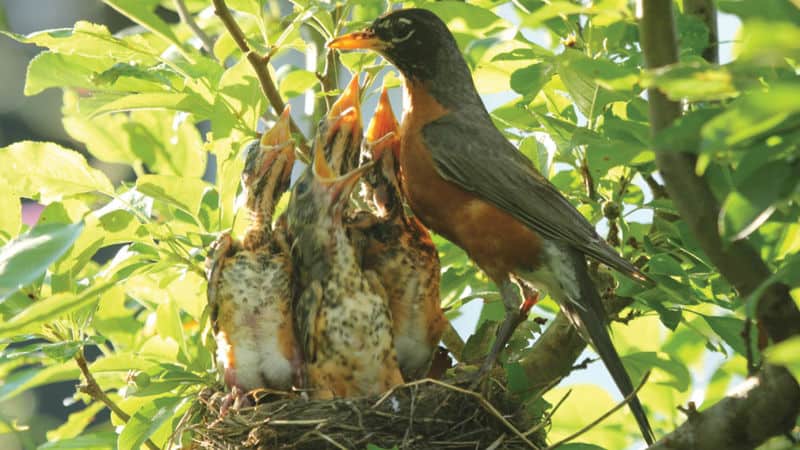 When our backyard birds begin building nests in early spring, it’s often difficult to know where they’ve placed them. They’ll come to feeders and suet cages to feed themselves and carry food away to their chicks, and most of them quickly and stealthily disappear to well-hidden nests.

Some of the most secretive are common backyard birds: northern cardinals, blue jays and gray catbirds. To find a well-camouflaged nest, you’ll need patience, watchfulness and a keen ear. Often, despite your best efforts to search among dense vines and bushes, you’ll come up empty. Then, suddenly you’ll be surprised to find begging chicks below your feeders, accompanied by weary parents carrying tidbits to the demanding fledglings.

Some of our backyard birds are upfront and obvious in their search for nesting sites. House wrens are notorious for noisy exploration. If you have several nest boxes throughout your yard, males will gurgle loudly as they zip between them, often filling each box with a pile of twigs in anticipation of tempting a potential mate. If a female comes along, the male will introduce her to each box and she’ll have the luxury of accepting or declining his handiwork.

Carolina wrens are also vocal birds as they search for the best nest site, often in the most unlikely places. They’ll carefully inspect garages and outbuildings for the perfect site, even spots under porches and outside staircases. They may scour your yard for days before choosing their nest site.

Other species are also transparent in their hunt. European starlings, a species that nests in cavities, will search for sites among any damaged trees with trunk holes or broken limbs. Carolina chickadees and tufted titmice are also cavity nesters and can compete for smaller holes in tree snags.

Probably the most active and obvious two species that build nests in our backyards are American robins and mourning doves. Robins can be both secretive or unabashedly obvious as they choose a site for nest building. Last spring, a robin quietly built a nest in a dense Japanese maple just a few feet from my patio. It wasn’t until I heard the chicks begging just a few feet from my Appalachian chair that I discovered the hidden nest practically right under my nose.

Yet, in the past, robins built nests on my front porch on a two-inch ledge, with grass and cloth remnants hanging feet below the mud-patched structure. And, in the same spring, a neighbor watched robins feed five chicks on a front porch ledge just feet from the front door.

Mourning doves, though, are the masters of nesting in plain view. Often very tolerant of human activity, doves will build nests in completely visible locations that other species would shun. Directly under a front porch overhang seems to be a prime site for doves to nest; here a parent quietly sits on eggs, quite undisturbed by any commotion a few feet from them.

The fork of lower tree limbs is also a common dove nesting site, often devoid of vegetation to conceal it in early spring. Their nests are constructed with a jumble of twigs that appear to be precariously balanced and at the mercy of strong spring winds. Despite jerry-built nests, you’ll soon find fledglings with their parents under feeders dining on spilled seeds and suet.

Our backyard birds finish raising their first clutch, alas; then several species such as robins, wrens and doves face the daunting prospect of a second go at it. Again they search for the absolute best site, whether concealed or in clear sight.

Jerry Uhlman has been writing about birding and travel for more than 20 years, including his Flyways & Byways column in the Richmond Times-Dispatch and his book, A Birder’s Guide to Metropolitan Richmond. Flyways@verizon.net. For more birding tips, check out Flyways & Byways.