Appreciating the beauty of these drab but ear-catching tunes 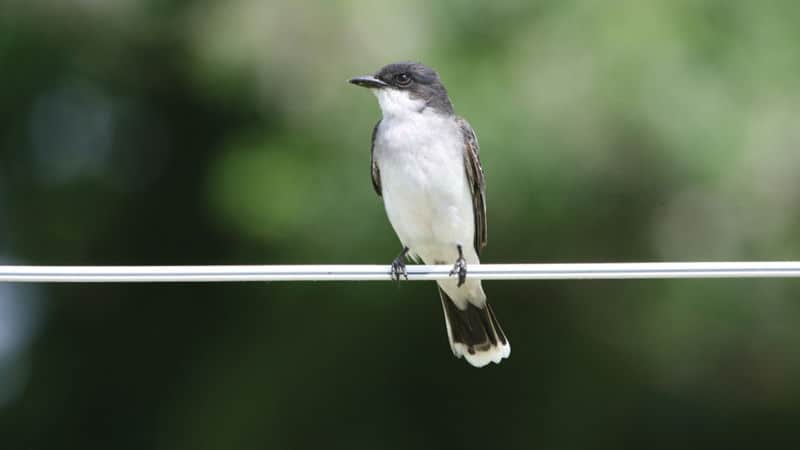 During the spring when songbirds surge northward along the Atlantic flyway and descend into our backyards and neighborhood parks, we usually watch for dazzling brightly colored warblers, grosbeaks, tanagers and orioles. Almost 30 warbler species sweep through the Commonwealth on their journey northward to breeding grounds. Of these, two dozen breed throughout our coastal plain and mountain habitats, but we also have the opportunity to spot many of those species that continue northward when they briefly stop to rest and feed.

No wonder we seek out warblers in the spring, since they are in their brightest plumage and sing repeatedly with purpose and gusto. Who can resist hunting for a yellow-breasted chat, a skulker usually hidden in thick underbrush, loudly hooting and giggling while defending territory and trying to attract a mate. Or, what birder can pass up the soft, meandering song of the Canada warbler that challenges anyone nearby to search diligently through thick vines to glimpse its lemon-yellow throat and chest, sporting a black-streaked necklace.

DON’T JUDGE A BIRD BY ITS FEATHERS

But many other avian species accompany our eye-catching songbirds on their northward journey, arriving in our backyards and neighborhood parks unheralded and often overlooked.

Although many of these fellow travelers have an intriguing song or call, their disappointing plumages are the root of such disrespect. Common plumages are gradients of black, white and gray, or earth tones. The lucky ones may have a pale-yellow wash or greenish hue at best.

The eastern kingbird (featuring above) is a good example of a species that generates little excitement. It does have potential: a distinctive “dzeet” call and fluttering wingbeats as it displays near treetops in the spring. But the bird has a black head, slate gray back, white underparts and a pale gray wash across its breast – in a word, uninspiring. Two of our prized warblers – blackpoll and black-and-white – have a similar color scheme. However, the two warblers have bold stripes and bars with crisp feather patterns. Both have a visual pizzazz that the poor kingbird lacks.

Chimney swifts suffer the same image challenge. The species clearly has a unique shape and distinctive chattering in-flight call; but birders barely acknowledge its presence overhead during twilight hours. Its odd behavior of swooping into chimneys at dusk has garnered the rapt attention of very few birders. 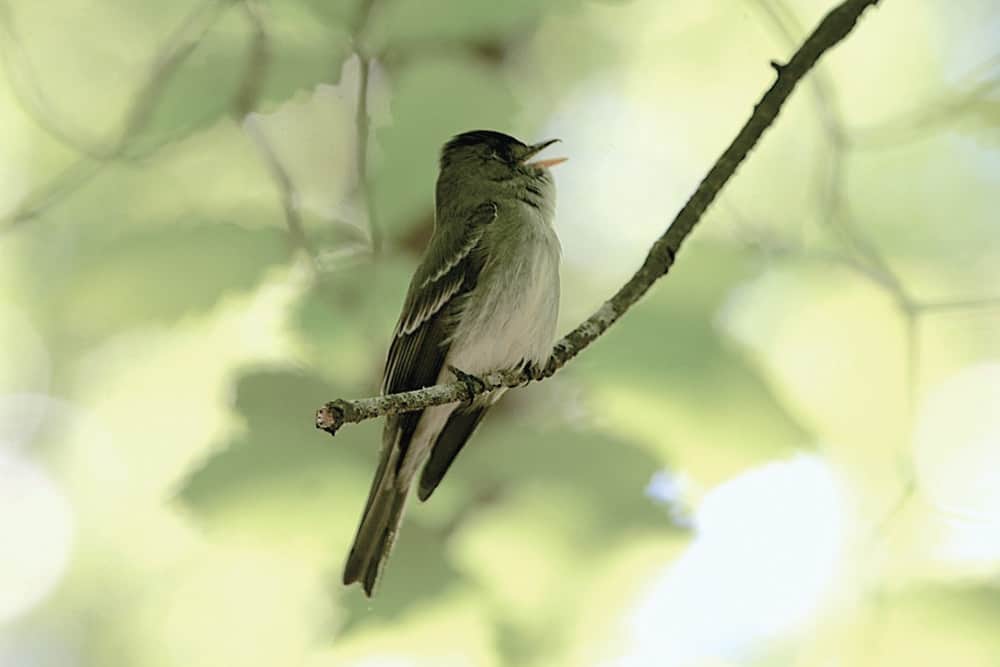 THEIR OWN KIND OF BEAUTY

Not counting certain sparrows, my vote for the drabbest species goes to our smallest flycatchers. Acadian and least flycatchers hang out in dense forests and dart from high perches to capture small flying insects. Despite flattering photos in field guides that show pale yellow and green feathering as well as clean wingbars, these two, 5-inch species usually appear much duller when you spot them perched. They remain well camouflaged among leafy branches.

A close cousin, the eastern wood-pewee has a distinctive and cheerful two-part call note; it first ascends then drops like a tenor slide trombone.

All three small flycatchers are difficult to find in the dense forest. This is in part due to their ability to perch motionless for what seems like forever and their lackluster appearances.

Perhaps it’s human nature to seek out eye-catching and dazzling species in the spring; but identifying drab songbirds can be rewarding, too. Can you really tell a wood-pewee, least flycatcher and Acadian flycatcher apart when perched in the shadowy forest interior until each gives its unique call-note? Taking up this daunting challenge can bring its own rewards and boost your identification skills. This spring, watch for the many drab species that you’ll encounter alongside of the splashy ones, and, if you’re diligent, before long you’ll find these humdrum birds are treasures in their own right.

Jerry Uhlman has been writing about birding and travel for 20 years, including his Flyways & Byways column in the Richmond Times-Dispatch and his book, A Birder’s Guide to Metropolitan Richmond. Flyways@Verizon.net