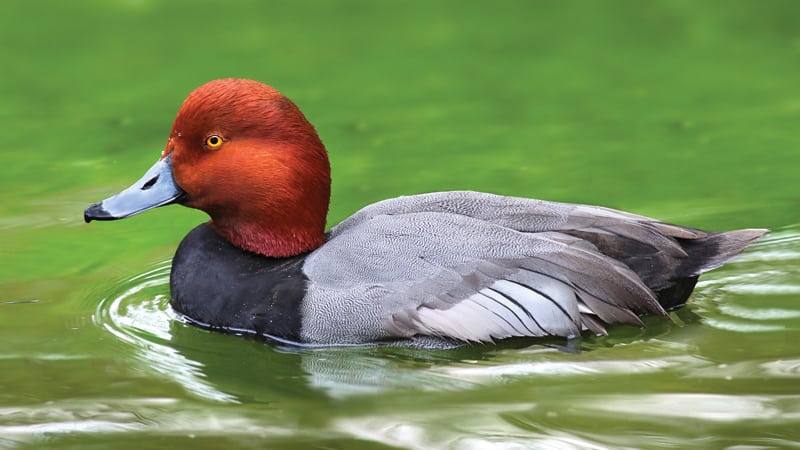 As winter arrives over the northern tier of the United States, waterfowl flee southward to escape the cold. Each successive storm diminishes their food sources and pushes more waterfowl southward. When large flocks arrive in central Virginia, you’ll have a chance to find not only familiar species that return year after year, but also uncommon ones that may challenge your identification skills.

There are nearly 30 species of ducks in North America, and you can find almost 20 of these in Virginia during winter months. Some species, often called dabbling or puddle ducks, follow inland flyways. Others, referred to as sea ducks or divers, prefer coastal routes.

DABBLING NEAR THE SURFACE

You’ll recognize dabbling ducks by the characteristic way they feed: tipping up and probing underwater, leaving only their hind-ends sticking out of the water. Sometimes dabblers stir the water by turning their heads quickly from side to side; they are searching for submerged vegetation and water-borne insects.

Dabblers are shallow water dwellers, and besides lakes and ponds you’ll often see them in flooded fields and marshes. When alarmed, they burst into the air with crisscrossing lines and often spiral downward near where they started.

In contrast, diving ducks usually go completely underwater in search of small fish, mollusks and plant matter. Divers have smaller tails and wings, but bigger feet to propel them. When you see both types of ducks in close proximity, you’ll easily see differences between dabblers and divers.

Diving ducks are more likely to be found in deeper water, often around coastal bays and river mouths. When alarmed, they patter across the water’s surface to take flight. The most common diving ducks found in our area include buffleheads, ruddy and ring-necked ducks and common mergansers.

In the Richmond area, there are several excellent sites to find ducks and hone your identification skills. One favorite among birders is the James River Park System, especially along the banks of Pony Pasture and Huguenot Flatwater, the floodwall and Belle Isle. You’ll see many buffleheads that drift downstream with the current while feeding; then they quickly fly back upstream to begin the routine over again.

The four ponds in Byrd and Maymont parks (especially Boat and Swan lakes) are also good spots to find a variety of ducks. Among the many domestic geese that hang out around the lakes, you’ll probably find northern pintails and shovelers. But more likely, you’ll find mallards and ring-necked ducks. Boat Lake will give you chances to take splendid photos of ring-necked ducks.

Henricus Historical Park, south of Richmond roughly 20 miles, is another great site, especially along the marsh as you drive toward the settlement. Two pull-offs with observation platforms over the marsh will give you opportunities to see close-up northern pintails, American wigeons, northern shovelers, gadwall, teal, wood ducks and buffleheads.

Swift Creek Reservoir, near Woodlake and Brandermill, is a larger and deeper body of water where you’ll have a chance to find tundra swans, brant and several species of diving ducks. Your best vantage point is along Genito Road where it crosses the reservoir’s northern edge. The roadway often carries heavy traffic, so be careful when pulling off and re-entering the roadway.

When severe winter weather causes lakes and rivers to completely freeze, waterfowl have to head south to find open waters in which to feed. This will give you a chance to find uncommon ducks such as scaup, canvasbacks and redheads.

The best place to find the greatest variety of winter waterfowl in Virginia is Chincoteague National Wildlife Refuge on the Eastern Shore. Here, you can find dozens of tundra swans, hundreds of snow geese and many species of ducks.

Jerry Uhlman has been writing about birding and travel for 20 years, including the Flyways & Byways column in the Richmond Times-Dispatch and his book, A Birder’s Guide to Metropolitan Richmond. flyways@verizon.net. For more Flyways & Byways, check out these past birding articles from Jerry Uhlman!