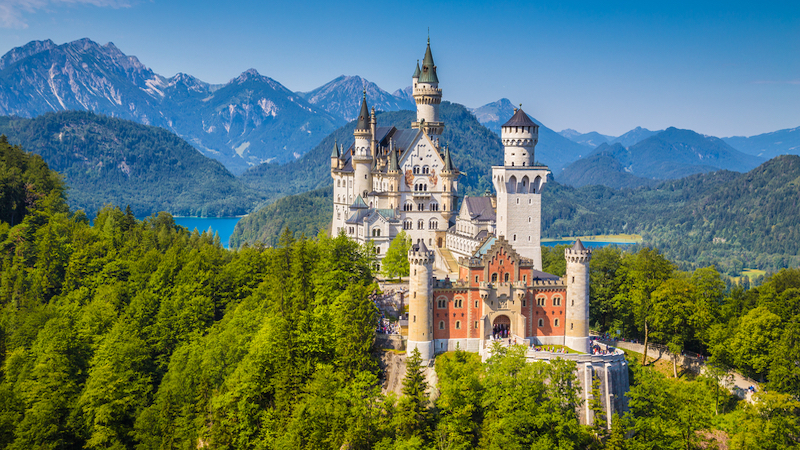 South of Munich in the foothills of the Alps, I toured Hohenschwangau Castle. It was “Mad” King Ludwig’s father’s castle – and Ludwig’s boyhood summer home. When his father died, Ludwig became king. He was just a boy, 19 years old. And rather than live with the frustrations of a modern constitution and a feisty parliament in Munich reining him in, King Ludwig II spent his next years lost in Romantic literature and operas … hanging out here with composer Richard Wagner as only a dreamy young king could.

The king’s bedroom was decked out like a fairy tale. The walls were painted in 1835 by a single artist, who gave the place a romantic, Tolkien fantasy feel. Lounging nymphs still flank the window and stars twinkle from the ceiling. A telescope stands as it did for the king, trained on a pinnacle on a distant ridge where Ludwig dreamed of building his ultimate castle fantasy: Neuschwanstein.

On my first visit here, squinting through that telescope at Neuschwanstein (which had also inspired a boy named Walt Disney), I could relate to the busy young king. Bound by schoolwork and house rules rather than a constitution and parliament, I too was a romantic when it came to building dream castles. Mine was a simple tree house, but for me, it was as dazzling as any castle in Bavaria.

On that same trip, just over the border in Austria near the town of Reutte, I found another castle: the brooding ruins of the largest fort in Tirol – Ehrenberg. This impressive complex was built to defend against the Bavarians and to bottle up the strategic “Via Claudia” trade route that cut through the Alps here, connecting Italy and Germany. Exploring the ruins, I climbed deep into a misty forest littered with meaningless chunks of castle wall – each pinned down by Pixy Stix trees and mossy with sword ferns. This once strategic and powerful fortress had somehow fallen apart and was slowly being eaten by the forest.

My friend Armin Walch, an archaeologist who lives in Reutte, had a vision to bring these ruins to life. He was born the same year as me and pursued his project like the Indiana Jones of castle scholars. Today, with European Union funding, he’s cut away the hungry forest to reveal and renovate what he calls the castle ensemble. And it’s open for business, enabling countless children to live out their medieval fantasies, leaping from rampart to rampart with sword ferns swinging.

On my last visit, I was honored for bringing so many visitors to this remote corner of Austria over the years. With Armin as the jovial master of ceremonies, the town’s hoteliers and tourism folks gathered in the castle like a council of medieval lords. Together we ate smoked game, swilled wine, and clinked pewter mugs. I gave an impromptu speech about the wonders of Americans climbing through history far from home. Then I knelt before a man in armor who drew a shiny sword with my name etched upon it, and was knighted – Sir Rick, first knight of Ehrenberg.

The sword was my gift. It was solid and sparkled with sentiment. I loved how it felt in my hand as I swung it back and forth, cutting through the air – and how it symbolically wove together my tree-house childhood, my love of history, my longtime connection with Reutte, and Armin’s vision. I requested that my sword stay in the museum as a special exhibit on the castle-loving boy from Seattle who fell in love with the Ehrenberg ruins and then grew up to bring decades of American travelers to Reutte with his guidebooks.

After the ceremony, Armin took me to his house for a drink. As a talented architect, he had cleverly hidden his sleek, futuristic, and creative pad behind a humble old-town facade. It was a royal domain for his family.

Armin and I climbed boyishly to his rooftop – a perch he designed to view Ehrenberg. Together we shared a glass of schnapps flavored with local herbs and peered through his telescope at our favorite castle complex – now illuminated by powerful floodlighting. In his youth – before he excavated it – almost no one knew about the fortress that hid beneath the trees on the mountain. Nudging me aside, Armin took his turn squinting through his telescope. Happy as two boys in a tree house, like two Romantic-age princes, we marveled at this castle of his dreams.