takes us to memorable stops along this overlooked part of Greece 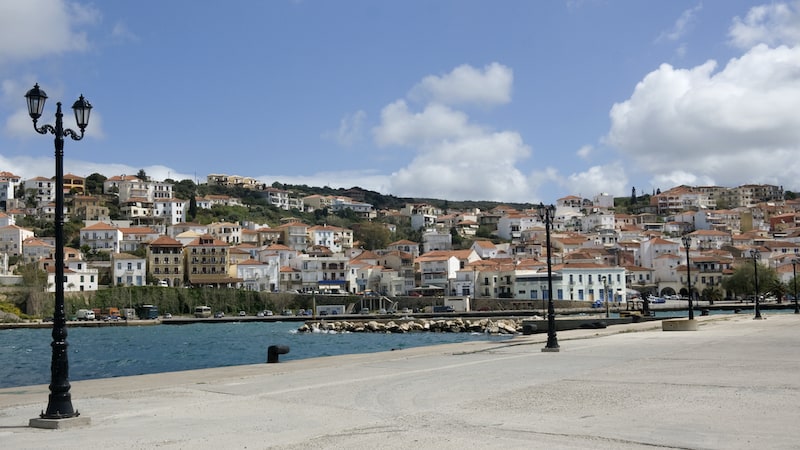 In this edition of Rick Steves’ Europe, the travel professional takes readers to the Peloponnese Peninsula in Greece, waltzing us through delightful gems that can enthrall and inspire.

As we’ve had to postpone our travels because of the pandemic, I believe a weekly dose of travel dreaming can be good medicine. Here’s one of my favorite European memories set in Greece’s Peloponnese Peninsula – a reminder of the fun that awaits us at the other end of this crisis.

At a beachside restaurant, with my chair and table lodged in the sand, I hear a repetitive beat and feel a faint but refreshing spritzing. Looking around for the source, I see a tough young Greek man in a swimsuit the size of a rat’s hammock. He’s tenderizing an octopus by whipping it like a wet rag, over and over, on a big flat rock. That octopus will be featured soon for dinner … someone else’s dinner.

I order moussaka and – to be emphatically Greek – a glass of Greece’s infamous, resin-flavored retsina wine. It makes me want to sling a patch over one eye and say, “Argh!” It’s like drinking wood. A vintner once told me there’s no such thing as a $50 bottle of fine Greek wine. I asked him, “What should I buy if I want to spend $30?” He paused, shrugged, and said, “Three bottles.”

Taking another sip of retsina, I think that, like its wine, the Peloponnese is rough, but with a complex history. I’m pondering where to go next. Hordes of tourists flock to the Greek islands, unaware of the salty pleasures awaiting right here, on this peninsula – without requiring a ferry ride or flight. Stretching southwest from Athens and studded with antiquities, this ancient land offers plenty of fun in the eternal Greek sun, with pleasant fishing villages, sandy beaches, bathtub-warm water, and none of the tourist crowds.

Gems in the necklace of the Peloponnese Peninsula

I could go to the charming port town of Nafplio. It’s small, cozy, and strollable, with great pensions, appealing restaurants, a thriving evening scene, and inviting beaches nearby. As the first capital of an independent Greece, it’s historically important, and it’s a handy base for touring the ancient sites at Mycenae and Epidavros.

East of Nafplio, Epidavros has the most magnificent theater from the ancient world. It was built nearly 2,500 years ago to seat 15,000. Today, it’s kept busy with tourists by day and reviving the greatest plays of antiquity at night. The theater’s marvelous acoustics are best enjoyed in near solitude. On my last visit, I sat in the most distant seat as my partner stood on the stage. I could practically hear the retsina rumbling in her stomach.

Just north of Nafplio are the ruins of Mycenae. This was the capital of the Mycenaeans, who won the Trojan War and dominated Greece 1,000 years before its Golden Age. That means that for 3,000 years, people have stood before this stony citadel and gaped at its fabled Lion’s Gate. It was made with stones so huge that it was long believed that no man could have built it. It must have been the work of the Cyclopes – so it was called “Cyclopean architecture.” Nearby, the tholos tomb, built in 1500 BC, stands like a giant stone igloo, with a smooth subterranean dome nearly 50 feet tall and wide. Standing alone under that dome, I realized that the people who built it were as ancient and mysterious to Socrates and Plato as Socrates and Plato are to us.

Another possibility is ancient Olympia. Modern tourists just can’t resist lining up for photos on the original starting block from the first Olympic Games in 776 BC. The games were held as part of a religious festival, but also served a political purpose: to develop a Panhellenic (“cross-Greek”) identity. Every four years, wars between bickering Greeks were halted for a sacred one-month truce, when leading citizens from all corners would assemble to watch the athletes compete. It was a hard-fought competition with strict rules. Drinking animal blood – the Red Bull of the day – was forbidden. Official urine drinkers tested for this ancient equivalent of steroids.

Further on, the Peloponnese boasts impressive remnants of Byzantine rule. Monemvasia, a colossal Gibraltar-like rock jutting up from the sea, has a romantic walled town at its base and ruins sprawling across its summit. In its 14th-century heyday, the remarkably well-preserved walled town of Monemvasia was one of the great commercial centers of the Byzantine Empire.

Wiping the salty spray from my glasses, I realize I haven’t made much progress in deciding where to go next. I’m worried: The retsina is starting to taste good. I’m finishing my third glass, entering the danger zone. If I drink any more, I’ll reek of it tomorrow … and never get around to tasting the other charms of the Peloponnese.

CAPTION OF PHOTO ABOVE: Small town in the Southwest part of the Peloponnese built in the natural bay of Navarino – Greece. CREDIT: (Dreamstime/TNS).