Mended bridges as life continues in this once war-torn city 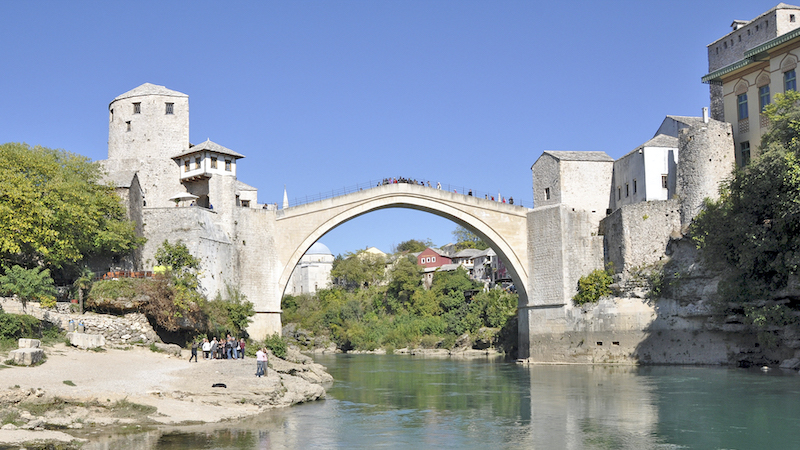 Travel writer Rick Steves take us to Bosnia, where Mostar’s tragic past still lives. The iconic 400-year-old, Turkish-style stone bridge was rebuilt, but remnants of the Yugoslav Wars of the 1990s remain. And the people are continuing to live and to celebrate life.

The Bosnian city of Mostar lies at a crossroads of cultures: just inland from the Adriatic coast, in the southern part of Bosnia-Herzegovina. Mostar’s inhabitants are a mix of Orthodox Serbs, Catholic Croats, and Muslim Bosniaks who lived in seeming harmony before the Yugoslav Wars of the 1990s, then suffered horribly when warring neighborhoods turned the city into a killing zone. The persistent reminders of the war make my visit emotionally draining, but I’m hopeful that connecting with the people here will also make it rewarding.

Before the war, Mostar was famous for its 400-year-old, Turkish-style stone bridge. Its elegant, single-pointed arch was a symbol of Muslim society here and the town’s status as the place where East met West in Europe. Then, during the 1990s, Mostar became a poster child for the war. First, the Croats and Bosniaks forced out the Serbs. Then they turned their guns on each other, staring each other down across a frontline that ran through the middle of the city. Across the world, people wept when the pummeled Old Bridge – bombarded by Croat paramilitary artillery shells from the hilltop above – finally collapsed into the river.

Today, I walk over the rebuilt bridge in a city that is thriving. It happens to be prom night. The kids are out, their Bosnian hormones bursting with excitement. Feeling young and sexy is a great equalizer. As long as you have beer, loud music, twinkling stars – and no war – your country’s GDP doesn’t really matter.

And yet, as I stroll through teeming streets, it’s chilling to think that these people – who make me a sandwich, stop for me when I cross the street, show off their paintings, and direct the church choir – were killing each other in a bloody war not so long ago.

Walking past a small cemetery congested with a hundred white-marble Muslim tombstones, I notice the dates. Everyone died in 1993, 1994, or 1995. This was a park before 1993. When the war heated up, snipers were a constant concern – they’d pick off anyone they saw walking down the street. Mostar’s cemeteries were too exposed, but this tree-filled park was relatively safe from snipers. People buried their loved ones here, under cover of darkness.

While pondering those tombstones, I meet Alen, a 30-something Muslim who emigrated to Florida during the war and is now back home in Mostar. “In those years, night was the time when we lived,” he explains. “We didn’t walk … we ran. And we dressed in black. There was no electricity. If the Croat fighters didn’t kill us with their bullets, they drove us mad with their hateful pop music. It was constantly blasting from the Croat side of town.”

Alen points to a tree growing out of a ruined building and says, “It’s a strange thing in nature: Sweet figs can grow with almost no soil.” He seems to be speaking as much about the difficult lot of Mostar’s people as its vegetation. There are blackened ruins everywhere. When I ask why, after 15 years, the ruins still stand, Alen explains, “Confusion about who owns what. Surviving companies have no money. The Bank of Yugoslavia, which held the mortgages, is now gone. No one will invest until it’s clear who owns the buildings.”

Mostar’s skyline is tense with symbols of religious conflict. Ten minarets pierce the sky like proud exclamation points. And, across the river, twice as tall as the tallest minaret, stands the Croats’ new Catholic church spire.

The next morning, before I leave Mostar, I stop at a tiny grocery store to order a sandwich from a woman I befriended the day before. She’s a gorgeous person, sad to be living in a frustrating economy and unable to bend down because of a piece of shrapnel in her back that doctors decided was safer left in. As she slices the sandwich meat, I bend down to gather carrots and cherries to add to what will be a fine picnic meal on wheels.

On my way out of town, I drive over patched bomb craters in the pavement. In the capital city of Sarajevo, the bomb craters have been filled with red resin – which looks like splattered blood – to commemorate those who died. Here, the craters are patched in black to match the street … but because I know what they are, they appear red in my mind.