Home » From Our Readers » Kitchen Renovation During Covid

‘I forgot to order grout!’ Sarah shouted – was it Covid or decorating delirium? 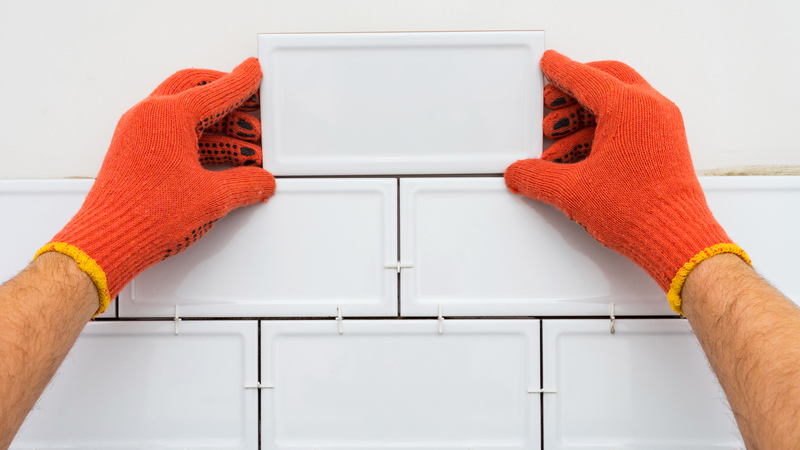 The pandemic seemed like a promising time to tackle a much-needed kitchen renovation, but Covid threw a monkey wrench into the plans. Boomer reader Allan Ripp shares the tale from his New York City apartment.

Is there ever a good time for a gut kitchen renovation? Probably not – why would anyone volunteer for such domestic upheaval? And yet, my wife and I couldn’t hold off any longer. The counters were cracked, appliances were breaking, the marble floor a stained mess and cabinets falling apart. While it was fun grabbing dishes and cups straight from open shelves because the door panels were missing, it wasn’t a good look.

We had a perfect window for the job – our children are out of our Manhattan apartment and we could try eating out after pandemic reluctance to dine indoors, maybe even some deliveries (we are usually take-out averse). 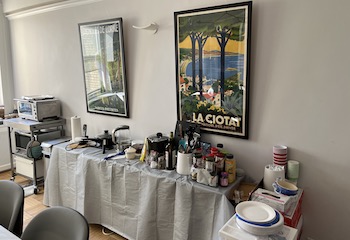 Sarah set up a makeshift cooking station in the dining room, with microwave, toaster oven, electric skillet and one of those wheeled caddies for foil and utensils; the workers moved our refrigerator into the living room until we installed a new one. Sarah found a temporary home for every pot, plate, spatula and spice, creating a full pantry in our daughter’s old bedroom closet (the soy sauce and balsamic were under bins filled with Archie comics and Beanie babies). She also tossed expired flour, pancake mix, cornstarch, extracts and other ancient foodstuffs we hadn’t cracked in years.

My only job was to haul a few bags of throwaways to a nearby church – goodbye Grandma’s gravy boat.

Things started promisingly. Sarah – an intrepid cook who invented a “kitchen-in-a-bag” accessory for whipping up meals in hotel rooms when our kids were little (hot pot essential!) – produced a hearty chicken soup the night before the wrecking crew arrived. Between her foxhole culinary skills and occasional meals out, we’d be fine for the 12 weeks or so our kitchen was out of commission.

Then Covid hit, with a surprising wallop. I tested positive first, the morning demolition started. Suddenly, the zippered plastic wall put up to keep debris on the other side of our living quarters became a biohazard barrier meant to contain us! So much for restaurants. I nursed my fever in the bedroom, just as a different set of workers repairing our building’s crumbling exterior began chiseling and drilling outside our eighth-floor window. The resulting Surroundsound construction from the two jobs was hallucinatory.

Of course, Sarah got sick two days later, though she continued meeting daily with our unphased architect. Never mind the virus, he said – which door handles do you want for the new cabinets? I flipped when the electrician cut off our internet but it was a good excuse to lie in bed and check my oxygen levels and temperature. All the while Sarah kept churning out four-star dinners from her tabletop commissary – grilled ginger salmon, chicken-zucchini and rice, fusilli with tuna, and lots more soup.

I wondered if we needed to redo the kitchen after all.

At night, with the guys gone, we slipped into the other side of the hazard zone and inspected the state of things using our phone lights. The exposed, pre-war water pipes were ghastly, the floor a concrete slab, and plaster was everywhere. We told ourselves that was progress.

Without use of a dishwasher, we allotted ourselves a single bowl, mug, fork and spoon, which we rinsed in the bathroom sink. It was like living in a college dorm, but our environmental impact had never been so modest. And since we both were sick we didn’t have to even think of having anyone over.

Kitchen renovation and a different kind of brain fog 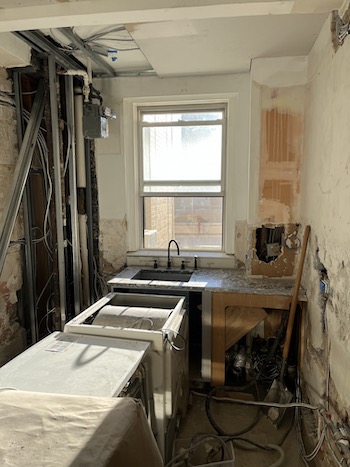 The job dragged (where is the plumber??), along with our coughing jags and hoarse voices. And the deliveries wouldn’t quit – a sink, a hose, a faucet (who knew they all came separately?). Sarah needed to check each one in case an order was wrong and I told her she was overdoing it. She agreed, then leapt from bed one afternoon shouting, “I forgot to order tile grout!” Was that the Covid or decorating delirium?

We watched a Ken Burns documentary called “The Dust Bowl” about catastrophic clouds of churned-up farmland that choked residents across the Great Plains in the 1930s. Each day, homeowners swept mounds of dust and pebbles from their parlors and porches, only to do it again the next. “That’s us!” Sarah and I shouted.

We escaped upstate a few days and finally tested negative but returned for countless decisions – a pocket door, a sconce, the counter! I thought Facetiming the architect would be fine but Sarah felt she had to be there with tape measure in hand, even with post-viral fatigue and asthma. We were encouraged when the new kitchen floor was laid on week five – there was plenty of grout on hand after all.

Then we thought, as long as we’re already under siege, what if we repaint our bathrooms and redo the floors? And fix some moldings? It was going to be a long slog and we did the only thing we could. Zapped some soup from the living room fridge and started watching Ken Burns’ epic “The Vietnam War.”

Read more contributions from Boomer readers in our From the Reader department.

Have your own tales to share with our baby boomer audience? View our writers’ guidelines and e-mail our editor at Annie@BoomerMagazine.com with the subject line “‘From Our Readers’ inquiry.”