What Would Twain Do? 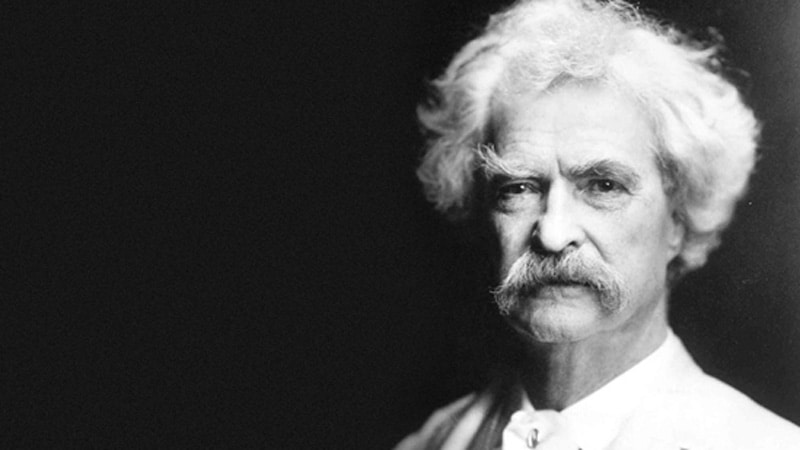 Mark Twain lived a long and colorful life – one of the great American lives, by any measure. Born into obscurity, he became famous throughout the English-speaking world. His marriage was a rich and rewarding one that lasted a lifetime, and his health was improbably robust, considering his smoking and drinking. His career as an author and lecturer was wildly successful.

He married an heiress, inheriting $4 million when his father-in-law died, and saw the duties of married life as deposits in the bank account of happiness. “If husbands could realize what large returns of profit may be gotten out of a wife by a small word of praise paid over the counter when the market is just right, they would bring matters around the way they wish them much oftener than they usually do.”

He was always ready, in later years, to share life’s lessons with others, on this understanding: “It is better to give than receive – especially advice.”

Stay Fit. Turning 50, Twain learned to ride a bike, with the guidance of a professional cyclist. “Although wholly inexperienced,” he said, “I dismounted in the best time on record.” He recommended the sport. “Get a bicycle. You will not regret it. If you live.”

Eliminate Bad Habits. A smoker since he was a child, Twain eventually came to restrict his tobacco intake. “I have made it a rule,” he said, “never to smoke more than one cigar at a time.”

Cultivate Your Finer Qualities. Consider the less fortunate. “Remember the poor,” Twain said. “It costs nothing.”

Watch Your Diet. “I stopped frolicking with mince pie after midnight,” he said on turning 70. “Up to then I had always believed it wasn’t loaded.”

Stay in Touch with Old Friends. “The holy passion of Friendship is of so sweet and steady and loyal and enduring a nature that it will last a whole lifetime,” he said, “if not asked to loan money.”

Appreciate Caregivers. As we age, health problems should be faced gracefully. When surgery is necessary, be thankful for the good care of your surgeon. “Console yourself with the reflection that you are giving the doctor pleasure, and that he is getting paid for it.”

Learn to Slow Down. “Never put off till tomorrow what you can do the day after tomorrow.”

Sleep Late. “Wisdom teaches us that none but birds should go out early, and that not even birds should do it unless they are out of worms.”

Have Pen Pals. If fortunate enough to have grandchildren, write to them, even if they have email. There will be so much novelty in receiving a letter, they will write back: “The most useful and interesting letters we get here from home are from children seven or eight years old. Happily they have got nothing to talk about but home, and neighbors and family – things their betters think unworthy of transmission thousands of miles. They write simply and naturally, and without straining for effect. They tell all they know, and then stop.”

FINANCIAL PLANNING FROM THE 19TH CENTURY

Retire Where Your Money Goes Further. When Twain learned that in parts of the Arctic, fishhooks are worth what millions of dollars would be in New York, he said that anyone would be “a fool to stay in New York when he can buy ten cents’ worth of fish-hooks and emigrate.”

Invest Wisely. (Twain found this easier to recommend than follow.) “There are two times in a man’s life when he should not speculate: when he can’t afford it, and when he can.” Although financial planners counsel their clients to put aside money for retirement, to keep “income streams” flowing – to contribute early to their 401(k) plans and work with a seasoned professional to devise “investment strategies,” this made no sense to Twain. He made pots of money and invariably blew it bankrolling one harebrained idea after another – only to be rescued, late in life, by a Wall Street friend who helped him rebuild his fortunes. He got professional help only when he had no alternative and faced bankruptcy. He, too, was unable to follow his own advice, which was to “learn from the mistakes of others – you won’t live long enough to make them all yourself.”

To his credit, Twain took responsibility for his mistakes. Once, after telling reporters that business partners had “swindled” him out of $25,000, he recanted. “I ought not to say I was swindled out of all the money. Most of it was lost through bad business. I was always bad in business.”

The best financial advice he could offer was this: “To succeed in business, avoid my example.”

Alan Pell Crawford is the author of How Not to Get Rich: The Financial Misadventures of Mark Twain and numerous other books. His essays and reviews have been published in The Wall Street Journal, The New York Times, The Washington Post, National Review and The Nation. His band, the Ham Biscuits, is available for both public and private events.