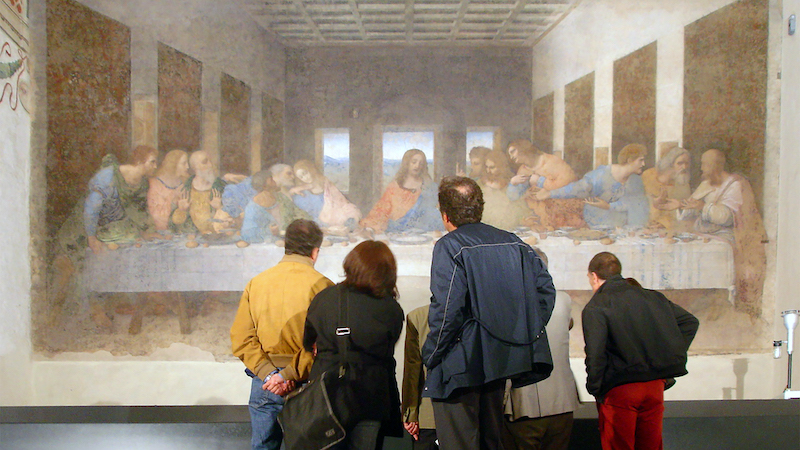 Travel writer Rick Steves transports us to Milan, home to two sacred masterpieces. He takes us to the Church of Santa Maria delle Grazie, where Leonardo da Vinci’s “Last Supper” graces the wall. Steves shares both history and his contemporary experience.

At Milan’s Sforza Castle I get a rare opportunity to enjoy a Michelangelo statue with no crowds. Michelangelo died while still working on the Pieta Rondanini, his last pieta – a representation of a dead Christ with a sorrowful Virgin Mary. While unfinished, it’s a thought-provoking work by a nearly 90-year-old genius. The symbolism is of life and of death: Jesus returning to his mother, as two bodies seem to become one. Christ’s head is cut out of Mary’s right shoulder, and an earlier arm is still just hanging there. Above Mary’s right ear, you can see the remains of a previous face (eye, brow, and hairline).

Michelangelo’s more famous pieta at the Vatican (carved when he was in his 20s) features a beautiful, young, and astonished Mary. Here, Mary is older and wiser. Perhaps Mary is now better able to accept death as part of life … as is Michelangelo. The pieta at the Vatican is simple and clear, showing the mother holding her dead son. Contemplating the Pieta Rondanini, I wonder who’s supporting whom.

Behind “The Last Supper”

A highlight of my Milan visit is seeing Leonardo da Vinci’s “Last Supper” in the Church of Santa Maria delle Grazie. Decorating a former dining hall, this remarkable, exactingly crafted fresco is one of the ultimate works of the Renaissance.

Deterioration began within six years of completion of “The Last Supper” because Leonardo painted on the wall in layers, as he would on a canvas, instead of applying pigment to wet plaster in the usual fresco technique. The church was bombed in World War II, but – miraculously, it seems – the wall holding “The Last Supper” remained standing. A 21-year restoration project (completed in 1999) peeled away 500 years of touch-ups, leaving Leonardo’s masterpiece faint but vibrant.

To preserve the artwork as much as possible, the humidity in the room is strictly regulated, and only 30 people are allowed in every 15 minutes. As my group’s appointed time nears, we’re herded between several rooms to dehumidify. The rooms’ doors close behind and open slowly in front of us. I’ve studied up, but I review my notes as I wait to enter, like cramming for a test. I want to get the most out of every second in the presence of Leonardo’s masterpiece.

Then the last door opens and we enter. There it is – filling the far wall in a big, vacant, whitewashed room: faded pastels, not a crisp edge, much of it looking like an old film negative.

To give my 15 minutes an extra punch, I decide to enter the room as if I were one of the monks for whom “The Last Supper” was painted some 500 years ago. I imagine eating here, in my robe and sandals, pleased that the wall in my dining room, which for so long has been under some type of construction, is finally done.

It’s a big day – the unveiling. The painting is big and realistic. Jesus and the 12 apostles are sitting at a table just like the three big tables we monks share here in our dining room. It’s as if we were just blessed with more brothers. The table in the painting is even set like ours – right down to the stiffly starched and ironed white tablecloth.

The scene now gracing our refectory is a fitting one. “The Last Supper” was the first Eucharist – a ritual we celebrate daily as monks. The disciples sit with Jesus in the center. Jesus seems to know he’ll die – his face is sad, all-knowing, accepting. His feet are crossed one atop the other, as if ready for the nail.

While we eat in silence, I meditate on the painting. It shows the moment when the Lord says, “One of you will betray me.” The apostles huddle in small groups, wondering, “Lord, is it I?” Some are concerned. Others are confused. Only Judas – that’s him clutching his bag of silver – is not shocked.

Again and again, my eyes return to Christ. He’s calm despite the turmoil he must feel over the ultimate sacrifice he must make.

But then, my modern-day sensibility intrudes. I can’t help it. I want to tell the monk that Leonardo cleverly used lines of perspective that converge on Christ, reinforcing the idea that everything does indeed center on him. But I suspect the monk wouldn’t care, since he already understands the artist’s intent.

Suddenly, two doors burst open – abruptly ending my musings. My group and I are sternly ushered out and a new group enters. On a bench in front of the church, I sit down for a moment to settle back into the 21st century.