Lima, cloud forests and rain forests, all in one week

As 2017 began, a fellow writer asked me my biggest challenge of 2016. I didn’t need to think about my response: “Maintaining fitness for a six-hour hike in gumboots in Peruvian mud – with mud coming to the top of my boots with every step.” The writer – making a deep sucking sound to imitate a boot-step up and out of mud – got the idea. “Six hours of leg-lifts, huh?”

Yes, Peru’s rainy season in the jungle provides a workout for hikers, but airline and hotel prices are cheaper (Nov. 1 to Dec. 15 and between Jan. 5 and late March). And fewer tourists during this season mean quicker, easier access to points of interest. The craggy drama of Andean hilltops with the ancient Incan ruins of Machu Picchu and the lushness of the lowland Amazon called to me. Peru has the second-largest portion of the Amazon after Brazil, which means lively biodiversity.

Serious adventure travelers would opt for a longer, three-night Inca Trail hike to reach Machu Picchu; but traveling it without a sanctioned guide is prohibited and requires arrangements months in advance. This was beyond my budget, so I chose a week with unpredictable weather (late February into early March) and an itinerary with shorter amounts of time at each destination. Peru time is only an hour behind Richmond time – no worry about jet lag. A quick walk in the area surrounding the Westin Lima Hotel, where my group of 19 stayed, showed off this Spanish vice-regal capital of colonial South America, home of historically remarkable mansions, churches and squares.

The Pantanos de Villa Wildlife Refuge provides a relaxing afternoon hiking option, particularly for birders. Among familiar bird species I sighted were the American oystercatcher and the black vulture; our guide pointed out some unique species – the Andean coot, Neotropic cormorant and Peruvian pelican.

THE SACRED VALLEY TO MACHU PICCHU

Reaching the historic ruins involved a plane flight from Lima to Cusco, a bus trip through the gorgeous Sacred Valley and then a ride on Inca Rail. The rail took us to Ollantaytambo train station in the town of Machu Picchu Pueblo/Aquas Calientes, built expressly for hosting visitors to Machu Picchu.

We arrived the afternoon before a guided tour up Machu Picchu early the next morning, well before the influx of day visitors at 10 a.m. (Daily tickets should be purchased months in advance, as they are limited in number and are issued for specific times – a good reason for traveling with a professional tour leader.) After checking into our casitas at Machu

Picchu Pueblo Hotel, set amid acres of tropical gardens with several species of orchids and hummingbirds, I saw coca plants growing. (The U.S. prohibits bringing coca leaves into the country, but a packaged product such as coca tea is okay, and you can get a coca-leaf mud treatment while visiting.) Best of all, I saw a Paddington-style bear – the spectacled bear at the Andean Bear Rescue Center on site, housing bears rescued from zoos, circuses and inadequate private homes. The center does research, conservation and education with the objective of rehabilitating the Andean bear – the only bear species native to South America – and works on a reinsertion program if conditions allow the animal to return to a suitable environment.

A Peruvian grandmother in native dress, with her two young grandchildren, smiled and posed for me when I pointed to my camera. The Peruvian people are very welcoming – a good reason for indulging in this experience and not just ticking the site off a bucket list.

For our final, two-day destination, we took a one-hour flight from Cusco to Puerto Maldonado, a van to an Amazon dock and a watercraft to the Inkaterra Hacienda Concepcion, a colonial-style hacienda near Lake Sandoval in the heart of the Amazon Rain Forest. Established in 1975, Inkaterra is a Peruvian company specializing in authentic travel experiences, whose stated goal is to preserve biodiversity and local cultures. It was gratifying to think that the minimal electricity available in the jungle was part of the sustainability effort. The company’s environmental efforts have resulted in diverse alliances, as the one with National Geographic Unique Lodges of the World.

Naturalist Dennis Osorio was a great resource for our guided jungle walks through the seasonal mud in gumboots (provided by Inkaterra). Our watercraft excursions meant traversing a narrow, 8-inch beam. Everywhere we walked in the jungle we heard the sharp, staccato voices and noisy antics of howler monkeys swaying from tree branches before we glimpsed them. Breakfast at dawn (in china cups, no less) was set in a watercraft on Lake Sandoval, where I saw my first sloth, clumsily trying to evade us by lumbering through treetops. Our noise flushed a large flock of parakeets, which looked like golden pixie dust as they flew overhead from the shoreline.

After lunch, we took a breathtaking stroll high above the palm trees on the canopy walk, via swinging rope bridges – wobbly but safe with

our grasps firm on waist-high ropes as we went from each shaky wooden step at the bottom of our ropes to the solid wooden platforms between trees. (It’s acceptable to spend this time relaxing at the hacienda.)

The treetop walk was a perfect conclusion to the trip: we had literally and figuratively stretched ourselves in Peru’s cloud forests and rain forests.

Midlothian-based freelance writer Martha Steger has received national awards for her journalism, essays, short fiction and poetry. She is a Marco Polo member of the Society of American Travel Writers and a member of the Virginia Communications Hall of Fame. 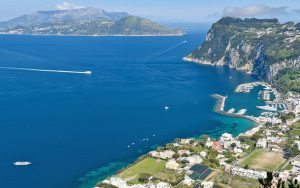 Romantic Italy: Amalfi Coast and the Island of Capri