Multiple jobs were nothing new for him. Now that he's retired, he’s picking up the pace. What is Jeff Kellam’s career, exactly? Which of the … what, dozens of projects? – I can’t count them all – represent what he was about?

How can this be a “second act” – something post-career at least as important as before – when he’s already had two acts?

Let’s say for now that Jeff Kellam is a retired Presbyterian minister, both of the usual church variety and of the radio/TV type.

I caught up with him at his home in upstate New York. Usually I do “Second Act” interviews over coffee. We did this over the phone. He was kind enough to include a coffee mug in his photo to continue my scam.

Disclaimer: Kellam and I are friends – but then anyone who knows him is his friend. (He even conducted our oldest daughter’s wedding, a memorable event, under a tent, in a rainstorm, at night. He read as his wife Joan held a flashlight.) Kellam began studying at Union Theological Seminary in Richmond in 1966, working in radio as well as on Channel 12’s production staff. In 1968 – next February will mark the 50th anniversary – he started “Showcase” on WBBL/WLEE. He opened with a Marvin Gaye and Tammi Terrell tune.

By 1969, he was ordained and working his radio ministry. “Showcase,” winning a national award in 1972, became the syndicated “Celebration Rock,” combining rock music with a gentle gospel message. It ran “coast to coast,” he kids. But it was on 50 stations from Salem, Oregon, to Tampa, Florida.

“That Sunday night hour wasn’t very good at first,” Jeff admits. “But it was so different, people thought it was good. Sometimes, over the years, the programs were very good. Often they were not. But that ministry opened the doors to other broadcast efforts, to teaching, to ‘pastoring,’ and to encouraging anyone who would listen to be gentle with people, and with themselves.”

In 1993, he left to become a full-time pastor at the East Craftsbury Presbyterian Church in Vermont.

(Disclaimer No. 2: East Craftsbury is an old-fashioned, snow-covered village straight out of “The Waltons” or a Currier & Ives print. I called him each December for a “Greetings from East Craftsbury” column when I wrote for the Richmond Times-Dispatch.)

In 2002, he became pastor to the First Presbyterian Church in Trumansburg, New York. Then “in 2007, I retired,” he says. “Supposedly.”

Hardly. “I felt as called to retirement as I was to ministering,” Jeff, now 72, says.

A Cornell University professor immediately asked him to write a chapter in his book. Kellam also took up blogging, reaching a larger audience. “The response was really nice,” he says. “And there was no pressure.”

He now also co-hosts a weekly television interview show, “Encounter,” in Binghamton, New York, for a local church council. He keeps close to some of his favorite music by promoting the Bill Carter and Presbybop Music jazz band. He serves as volunteer parish associate for a local church.

He was even called back to that little Vermont church for a Sunday in February. “They were celebrating their 200th anniversary and they asked me to preach,” he says. “I said, ‘I haven’t gotten any better.’”

“If there is to be joy and satisfaction in retirement, [it’s] by continuing to use one’s perceived gifts in meaningful and even challenging ways,” Jeff says. He adds with a verbal wink: “No matter what anyone else thinks.” 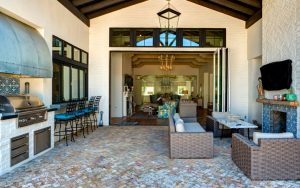