The Art of Racing Sailboats – From Dry Land

On the shore of Lake Rooty in Innsbrook 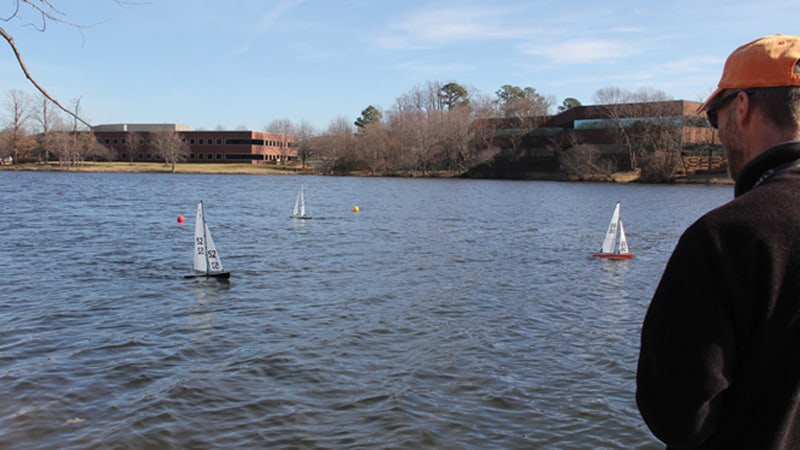 Like most of the members of the Richmond Model Yacht Club, Rob Suydam earned his sea legs on sailboats much larger than the one he is focusing on now.

Suydam and three other members of the club have gathered on a breezy Saturday morning on the shoreline behind the Snagajob offices in the Innsbrook Corporate Center. It’s early in the year, before regatta season starts, and they’re testing their boats and their sailing abilities.

“On a big boat you don’t realize how much the wind changes,” Suydam says. “It changes velocity and direction.”

The RG65 sailboat he is controlling from the shoreline is 65 centimeters long – a shade over 2 feet – and that small size makes it highly sensitive to wind shifts.

“So we’re constantly making changes, we’re tacking,” Suydam says, his attention suddenly honed in on a wind-aided maneuver the sailboats have just made to pick up speed and head toward a marker buoy.

“Awesome! That’s a killer tack right there; that’s a great tack!” Suydam says. “[The wind] shifted hard right, and the shift that occurred right there that made all of us make that mark, a big-boat sailor would have never noticed it.”

Suydam, a state employee, is commodore of the Richmond Model Yacht Club, a small but active group of sailing enthusiasts in metro Richmond. They hold their races at Lake Rooty in Innsbrook, where they periodically have to dodge cyclists and joggers on the shoreline trails.

Last year the club had about 15 members – all men, Suydam says. “We’re still looking for our first female.”

“Big boats” is where Suydam and friends developed their love of sailing. Of the four men at Lake Rooty on this particular Saturday, all said they had grown up sailing.

Ric Bergstrom, a State Farm agent, is new to the club, but not to sailing.

“I heard about the club for a while, and followed them, and went out to one of the races last fall, and somebody said, ‘Here, sail my boat.’ And that’s all it took. Next thing you know, I’m like, ‘All right, I’m going to buy one.’”

Bergstrom grew up in Annapolis, Maryland. “All my friends played lacrosse,” he says. “I sailed.”

“When I was a kid I raced a lot,” Bergstrom says. “I did thousands of hours of racing when I was between, like, 12 and 25. I didn’t race much after that.”

Bergstrom’s father, who worked in Annapolis for the federal government, had started sailing as a boy in Minneapolis. He passed on his love of sailing to his son.

There’s an age-worn adage that says a sailboat is nothing but a hole in the water to pour your money into.

Perhaps true with the big boats, but not much at the radio-controlled level, Suydam says.

“This is a custom-built RG65,” he says, displaying a sleek sailboat that he won’t sail on this occasion. “And the three RGs that we are sailing (are) a kit-built boat, called the DragonForce. You can go online and buy it for $200, radio and all.”

The RG65 weighs about 2 pounds. Club members also sail a larger model, the Seawind, which weighs about 6 pounds. At the top levels of model-yacht competition is the International One Meter (IOM), a meter-long boat that Suydam says attracts the best sailors and best boat designers.

Some people choose to buy kit-built boats; others want a more hands-on experience.

For Scott Duff, a local dentist, this will be his third year in the club.

“It really satisfies a niche for me,” Duff says. “I’m a tinkerer, a builder. Some of the guys like to build, some just like sailing.

“I used to build model airplanes,” he says. “The problem with them is they go up, and they come down … sometimes in a million pieces.”

“I still race catamarans,” Duff says, “but you’ve got to travel to do that. The reason I like this is I can come out here for three hours and get the same competitive stuff that I get with those and not have to set up and take down.”

Suydam says a day of racing big boats might involve one or two races. In two or three hours of sailing the radio-controlled boats, RMYC members might get in eight to 10 races – and not have to leave the Richmond area.

Plus, he says, “It’s a great way to spend the afternoon with a bunch of guys. There’s a lot of camaraderie.”