The fine ingredients that fill the Viennese melting pot 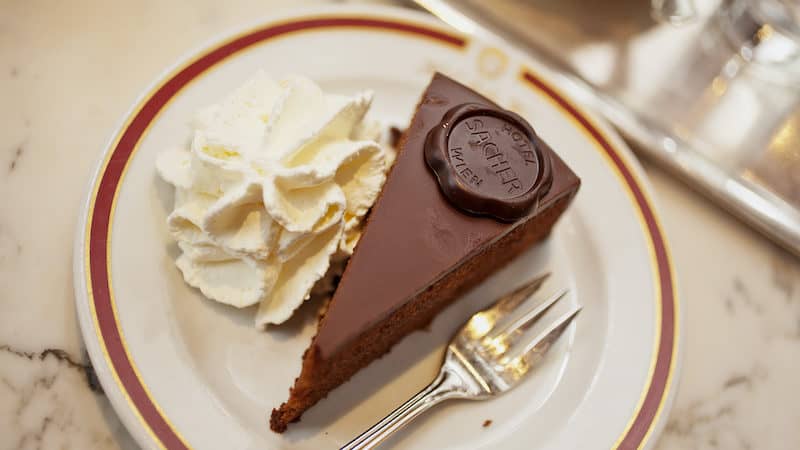 Travel writer Rick Steves sets the stage for the glories of Austria, with a snapshot of the history, the people, the renowned, mouth-watering, Sacher torte and opera in Vienna.

As we’ve had to postpone our travels because of the pandemic, I believe a weekly dose of travel dreaming can be good medicine. Here’s one of my favorite European memories from Vienna – a reminder of the fun that awaits us at the other end of this crisis.

Munching Europe’s most famous chocolate cake – the Sacher torte – in Cafe Sacher, across from Europe’s finest opera house, I feel underdressed in my travel wear. Thankfully, a coffee party of older ladies, who fit right in with the smoked mirrors and chandeliers, make me feel welcome at their table. They’re buzzing with excitement about the opera they are about to see – talking of long-dead Viennese composers as if they were still neighbors and even bursting into occasional bits of arias.

Loni, the elegant white-haired ringleader, answers my questions about Austria. “A true Viennese is not Austrian, but a cocktail,” she says, wiping the brown icing from her smile. “We are a mix of the old Habsburg Empire. My grandparents are Hungarian.” Gesturing to each of her friends, she adds, “And Gosha’s are Polish, Gabi’s are Romanian, and I don’t even know what hers are.”

Filling the pot with the finest of ingredients

For 600 years, Vienna was the head of the once-grand Habsburg Empire. In 1900, Vienna’s nearly two million inhabitants made it the world’s sixth-largest city (after London, New York, Paris, Berlin, and Chicago). Then Austria started and lost World War I – and its far-flung holdings. Today’s Vienna is a “head without a body,” an elegant capital ruling tiny Austria. The average Viennese mother has one child, and the population has dropped to 1.8 million.

“Dogs are the preferred child,” she says, inspiring pearl-rattling peals of laughter from her friends.

Sharing coffee and cake with Viennese aristocracy who live as if Vienna were an eastern Paris, and as if calories didn’t count, I’m seeing the soul of Vienna. Vienna may have lost its political clout, but culturally and historically, this city of Freud, Brahms, a gaggle of Strausses, Empress Maria Theresa’s many children, and a dynasty of Holy Roman Emperors remains right up there with Paris, London, and Rome.

As far back as the 12th century, Vienna was a mecca for musicians, both secular and sacred. The Habsburg emperors of the 17th and 18th centuries were not only generous supporters of music but also fine musicians themselves (Maria Theresa played a mean double bass). Composers such as Haydn, Mozart, Beethoven, Schubert, Brahms, and Mahler gravitated to this music-friendly environment. They taught each other, jammed together, and spent a lot of time in Habsburg palaces. Beethoven was a famous figure, walking – lost in musical thought – through Vienna’s wooded parks.

After the defeat of Napoleon in 1815, the Congress of Vienna shaped 19th-century Europe. Vienna enjoyed its violin-filled belle epoque, which shaped our romantic image of the city: fine wine, cafes, waltzes, and these great chocolate cakes. The waltz was the rage and “Waltz King” Johann Strauss and his brothers kept Vienna’s 300 ballrooms spinning. This musical tradition created the prestigious Viennese institutions that tourists enjoy today: the opera, Boys’ Choir, and great Baroque halls and churches, all busy with classical concerts.

Waltzing into the present

As we split up the bill and drain the last of our coffee, the women take opera tickets out of their purses in anticipation. “Where will you be sitting?” Loni asks.

“Actually, I’ll be standing,” I say. “I’ve got a Stehplatz, a standing-room-only ticket.” (Vienna opera makes sure students and music-lovers with limited budgets can see performances on the cheap – if they don’t mind climbing to the top of the theater and standing.)

The women look at me kindly, perhaps wondering if they should have paid for my cake and coffee.

“A Stehplatz is just EUR4. So I have money left over for more Sacher torte,” I tell them with a smile. What I don’t say is that, for me, three hours is a lot of opera. A Stehplatz allows me the cheap and easy option of leaving early.

Leaving the cafe, we talk opera as we cross the street. The prestigious Vienna Opera isn’t backed in the pit by the famous Vienna Philharmonic Orchestra, but by its farm team: second-string strings. Still, Loni reminds me, “It’s one of the world’s top opera houses.” Even with 300 performances a year, expensive seats are normally sold out – mostly to well-dressed, Sacher torte-eating locals. Saying goodbye to my new friends, I head for the standing-room ticket window. Cackling as old friends do, they waltz through the grand floor entrance and into another evening of high Viennese culture.