Oozing with energy and life 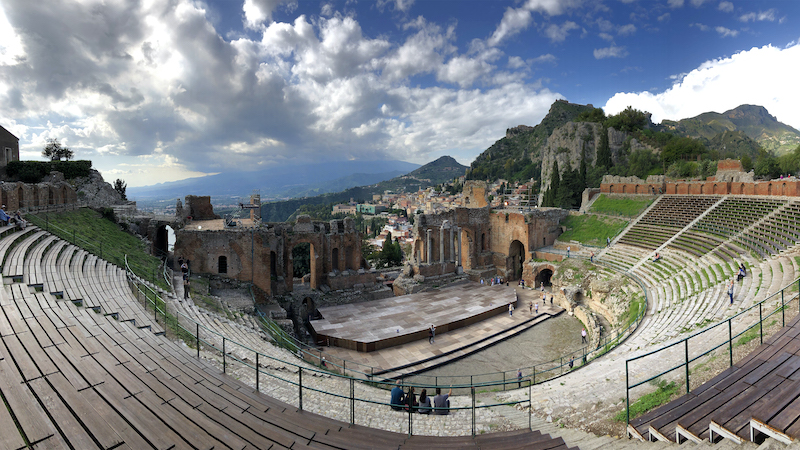 Jabbing his pole like a one-pronged pitchfork into the slow red river of rock, the ashtray salesman pulled out a hot wad of lava. I scrambled back as he swung it by me and plopped it into a mold. His partner snipped it off with big iron clippers and rammed it into shape. Dropping the now shapely mass into a bucket, the water did a wild jig. Cooling on a crispy black ledge were a dozen more lava ashtrays, each with the words “Mount Etna, Sicily” molded into it.

As the red lava poured out of its horribly hot trap door, I unzipped the ski parka I’d rented at the lift. At 11,000 feet, even on a sunny day, it’s cold on top of Mount Etna … unless you’re spitting distance from a lava flow.

At the edge of the volcano, I surveyed the island. Old lava flows rumbled like buffalo toward teeming Catania. The island’s sprawling second city butted up against a crescent beach which stretched all the way to Taormina – Sicily’s romantic cliffside haunt of aristocrats at play. And to my right was the hazy, high, and harsh interior.

Sicily sights are hard to grasp; its historic and artistic big shots just don’t ring a bell. The folkloric traditions such as marionette theaters promoted by tourist brochures seem to play out only for tour groups. And the place must lead Europe in litter. But there’s a workaday charm here. If you like Italy for its people, tempo, and joy of living – rather than for its Botticellis, Guccis, and touristic icons – you’ll dig Sicily.

Sicily, standing midway between Africa and Europe, really is a world to itself. On this spirited island, in spite of Italian government and European Union pressure, the siesta persists and motorbikers’ hair continues to fly in the Sicilian wind.

Palermo is an urban highlight of Sicily with lavish art, boisterous markets, and holy cannoli. In Palermo’s markets, animals hang like anatomy lessons, sliced perfectly in half. Fichi d’India, the fist-sized prickly pear that tastes like a cross between a kiwi and an orange, are peeled and yours for less than a euro.

Palermo offers a great bone experience – skull and shoulders above anything else you’ll find in Europe. Palermo’s Capuchin crypt is a subterranean gallery filled with 4,000 “bodies without souls” howling silently at their mortality. For centuries, people would choose their niche in death and even stand there getting to know their macabre neighborhood. Then, when they died, dressed in their Sunday best, they’d be hung up to dry.

Cefalù was my favorite small-town stop. Steeped in history and bustling with color, it’s dramatically set with a fine beach on a craggy coast under a pagan mountain. I dutifully toured Cefalù’s museum and cathedral. But the real attraction is on the streets. As the sun grew red and heavy, the old women – still in bathrobes it seemed – filled their balconies as the young people clogged the pedestrian- (and Vespas-) only main drag. Tsk-tsking at the age-old flirting scene, the women gossiped about the girls below. 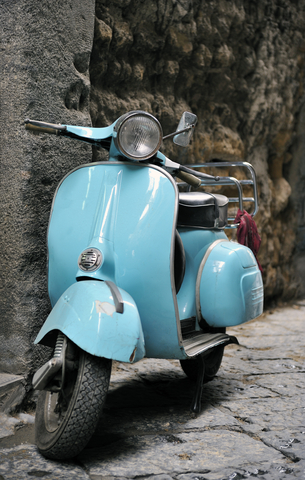 My friend tells me of the motorbike he lusts after. “It’s a classic Vespa from the ’70s … with a body that’s round like a woman’s.” Just then a guy gallops up on his very round and very blue classic Vespa. He declares, “It’s the only Vespa I’ve ever owned. I got it when I was 14. That was in 1969. The year man first walked on the moon, that was the year I first rode this Vespa.” My friend and a few other guys gather almost worshipfully around. The old women in the balconies and the miniskirted flirts suddenly no longer existed as that very round and very blue Vespa just dripped in Sicilian testosterone.

Nearby, a cafe overlooks the beach. I sip my latte di mandorla (almond milk) with the locals who seem to be posted there on duty, making sure that big red sun goes down. Little wooden boats, painted brightly, sit plump on the beach. Above them, the fisherman’s clubhouse fills what was a medieval entry through the town wall. I wander in.

I’m greeted warmly by the senior member, “Il Presidente” – the men go by nicknames and often don’t even know their friends’ real names. Since the 1960s, Il Presidente has spent his nights fishing, gathering anchovies under the seductive beam of his gas-powered lampara. As he takes the pre-Coleman stove vintage lamp off its rusty wall hook, I see tales of a lifetime at sea in his face. As he shows me the ropes he wove from local straw and complains that the new ropes just aren’t the same, I lash him to the rack of memories I’ll take home from Sicily.

PHOTO CAPTION, ABOVE: The Greek theater in Taormina: With a view like this, no play is a tragedy. CREDIT: Orin Dubrow, Rick Steves’ Europe.