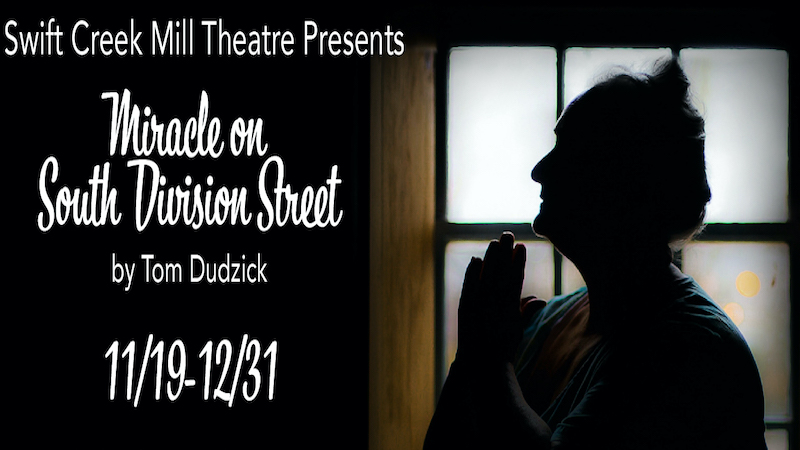 The Nowak family homestead sits amidst the urban rubble of the East Side of Buffalo, New York. “Maybe the neighborhood is depressed, but not Clara, the family matriarch,” say playwright Tom Dudzick on his website. “She happily runs her soup kitchen and tends to the family heirloom – a 20-foot shrine to the Blessed Mother which adjoins the house.” According to family lore, the Blessed Virgin Mary appeared in Clara’s father’s barbershop.

The family gathers at the old home to commemorate the family “miracle.” During the course of the family meeting, the entire family’s faith is shaken to the very core when a deathbed confession causes the family legend to unravel.

The results are both heartfelt and hilarious.

Peter D. Kramer, The Journal News: “A rollicking comedy where one revelation builds on another to an unexpected and thoroughly satisfying conclusion.”

Peter Filichia of Theatremania.com: “Utterly delightful while delivering a solid message on faith, the lack of it, why we believe what we believe, and how we can, or must, adjust to life’s surprises.”

Daniel M. Gold, The New York Times: “Relatives who are a little too close; a suffocating sense of limits; secrets that, once shared, undo the precepts that defined a way of life: If these sound like elements in a family’s deconstruction – the stuff, say, of a Sam Shepard play – they certainly could be. But Tom Dudzick’s “Miracle on South Division Street” … is a sprightly, gentle comedy, where revelations that might remake a family’s sense of itself are each rolled out in service of laughter.”