Home » Travel » The Beauty of the Italian Language for Travelers

The Beauty of the Italian Language for Travelers 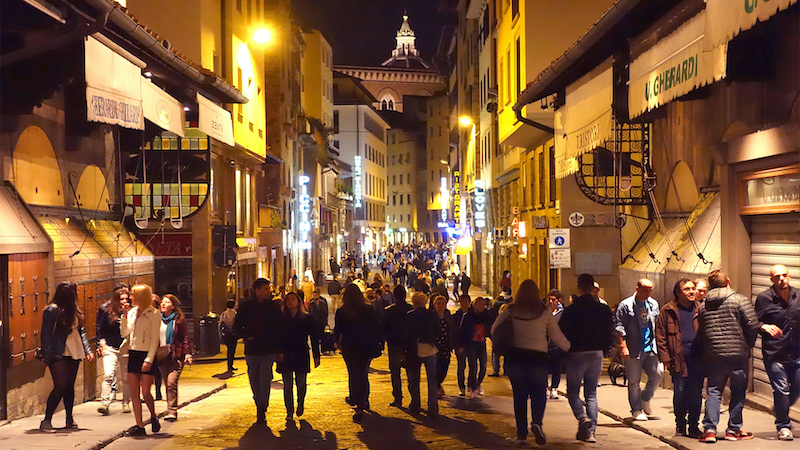 Travel writer Rick Steves transports us to Italy, to the beauty of the Italian language. More than just a means of communication, it speaks of the Italian sense of life.

I am terrible at foreign languages. Despite traveling around Europe four months a year since I was a kid, I can barely put a sentence together anywhere east or south of England. But with some creative communication, I manage just well enough to write guidebooks, produce TV shows, and enjoy Europe on vacation. And nowhere do I have more fun communicating than in Italy.

Because Italians are so outgoing and their language is such fun, interactions are a pleasure. Italians have an endearing habit of speaking Italian to foreigners, even if they know they don’t speak their language. If a local starts chattering at you in Italian, don’t resist. Go with it. You may find you understand more than you’d expect. Italians want to connect and try harder than any other Europeans. Play along.

I find Italian beautiful, almost melodic. It’s fun to listen to and even more fun to speak. It has a pleasing rhythm and flow, from buon giorno and buona sera (“good day” and “good evening”), ciao (“goodbye”) and per favore (“please”) to bellissima (“very beautiful”) and La Serenissima (“the most serene,” Venice’s nickname). Two of my favorite phrases – and sentiments – are la dolce vita (“the sweet life”) and il dolce far niente (“the sweetness of doing nothing”).

Italians are animated and dramatic, communicating as much with their bodies as with their mouths. You may think two people are arguing, when in reality, they’re agreeing enthusiastically. When I’m in Italy, I make it a point to be just as melodramatic and exuberant. Don’t just say, “Mamma mia.” Say, “MAMMA MIA!” with arms open wide and hands up in the air. It feels liberating to be so uninhibited. Self–consciousness kills communication.

In Italy, hand gestures can say as much as words. For instance, the cheek screw (pressing a forefinger into the cheek and rotating it) is used to mean cute or delicious. A chin flick with the fingers means, “I’m not interested; you bore me.” The hand purse (fingers and thumb bunched together and pointed upward) is a gesture for a question, such as, “What do you want?” or, “What are you doing?” It can also be used as an insult to say, “You fool.”

The Italian version of the rude middle finger is to clench the right fist and jerk the forearm up, slapping the bicep with the left hand. This jumbo version of “flipping the bird” says, “I’m superior.” If Italians get frustrated, they might say, “Mi sono cadute le braccia!” (“I throw my arms down!”) – sometimes literally thrusting their arms toward the floor to say, “I give up!”

Sensuality reflected in the language

Italians appreciate sensuality, which can be heard in their language. Rather than differentiating among the five senses to describe what they’re hearing, smelling, or tasting, Italians talk about sensing (sentire):

“Did you sense the ambience as you walked by?”

Instead of asking, “Are you listening?” an Italian will ask, “Do you sense me?”

One of the best ways to observe Italians communicating – and to communicate with them – is to participate in the passeggiata. This ritual promenade takes place in the early evenings, when shoppers, families, and young flirts on the prowl all join the scene to stroll arm in arm, spreading their colorful feathers like peacocks. In a genteel small town, the passeggiata comes with sweet whispers of “bella” (pretty) and “bello” (handsome). In Rome, the passeggiata is a cruder, big-city version called the struscio (meaning “to rub”). Younger participants utter the words “buona” and “buono” – meaning, roughly, “tasty.” As my Italian friends explained, “Bella is a woman you admire – without touching. Buona is something you want, something … consumable. Bella is too kind for this struscio.”

To really immerse yourself in the culture, it’s important to take risks in conversation. Italians appreciate your attempts. Miscommunication can happen on both sides, but it’s part of the fun.

One night my waiter declared in English, “The cook is in the chicken.” Later, when I ordered a tonic water, he asked me, “You want lice?”

On another trip, I was eating at a restaurant in Assisi with a guide named Giuseppe and his wife, Anna. Anna greeted each plate with unbridled enthusiasm. Suddenly, Giuseppe looked at me and said in English, “My wife’s a good fork.”

Shocked, I thought I must have misheard him.

Giuseppe explained, “Una buona forchetta … a good fork. That’s what we call someone who loves to eat.”