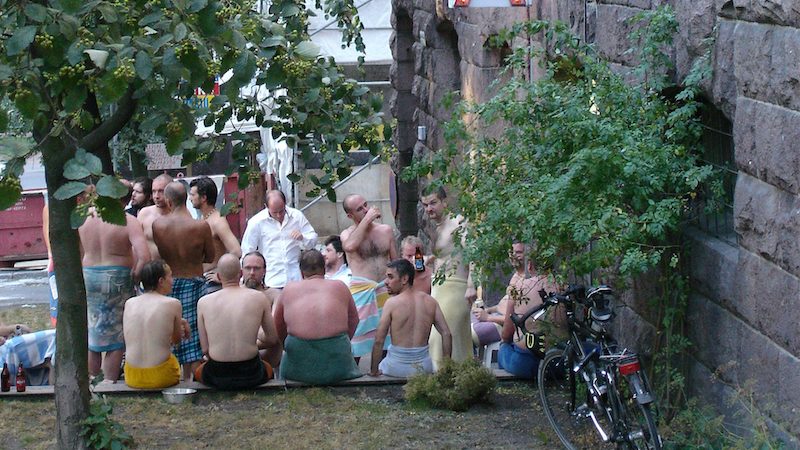 Travel guru Rick Steves takes the reader to his Finnish sauna experience, to a public sauna in a gritty Helsinki neighborhood, and to his realization: “The sauna is the great equalizer.”

As we’ve had to postpone our travels because of the pandemic, I believe a weekly dose of travel dreaming can be good medicine. Here’s one of my favorite European memories from Finland – a reminder of the fun that awaits us at the other end of this crisis.

I’m in Helsinki, surveying the city from its fanciest rooftop restaurant. The setting sun glints off the cruise ships in the harbor as fish merchants take down their stalls in the market. But a fleshier scene on the rooftop below me steals my attention.

It’s six bankers wrapped in white towels enjoying a sauna. In all proper Finnish office buildings – whether banks, insurance companies, or research institutes – a rooftop sauna is an essential part of the design. Free snacks and drinks at the sauna after work is almost an expected perk. One rotund fellow is so pink from the heat that – with his white towel wrapped around his waist – he reminds me of a pool ball.

As a tourist, I’m not invited to join the bankers on the rooftop, and the few remaining public saunas in Helsinki are in gritty neighborhoods. In this affluent city, most people have private saunas in their homes or cabins. Rough working-class neighborhoods are most likely to need – and therefore have – a public sauna. So I get on the subway and head for Kotiharjun Sauna in the scruffy district. At first glance, it’s clear that this place is the local hangout – and rarely sees a tourist. Outside, a vertical neon sign in simple red letters reads: SAUNA. Under it, a gang of big Finnish guys wrapped only in small towels fills a clutter of white plastic chairs. They are expertly relaxing.

As there isn’t a word of English anywhere, I rely on the young attendant at the window for instructions. He explains the process: Pay seven euros, grab a towel, strip, stow everything in an old wooden locker, wear the key like a bracelet, shower, enter the sauna … and reeeelax.

“No, there’s a sauna upstairs for women.”

“What about getting a scrub?”

Pointing to an aproned woman, he says, “Talk directly with her … six euros extra.”

The sauna is far from the sleek, cedar prefab den of steam I expected. Six crude concrete steps with dark wooden railings and rustic walls create a barn-like amphitheater of steam and heat. The clientele is tough and working class. A huge iron door closes off the wood stove (which is busy burning through its daily cubic meter of firewood). The third step up is all the heat I can take. Everyone else is twice as high, sitting on the top level for maximum steam and maximum heat. Towel in hand, I’d wondered whether it’d be used for hygiene or modesty. Now inside, the answer is clear … neither.

The entire scene is three colors: gray concrete, dark wood, and ruddy flesh. Naked with their hair wet and stringy, people look both more timeless and more ethnic. There’s virtually no indication of what century we’re in. But looking at their faces, it’s clear to me: This is Finland.

Each guy has a tin bucket between his legs for splashing cool water on his face. I ask about the bin of birch twigs that sits on the bottom step. Slapping your skin with these, one man explains, enhances your circulation. The roughed-up leaves emit a refreshing birch aroma as well as chlorophyll, which opens the sinuses.

Part two of a good sauna is the scrub down. The woman in the apron scrubs men one at a time all day long. She’s finishing up with a guy sitting on a plastic chair, dousing him with water. After his work-over, he looks like a lifeless Viking Gumby.

Awkwardly I ask, “Me next?”

She welcomes me to her table. She reminds me of a Stalin-era Soviet tractor driver.

Lying there naked, I feel like a salmon on a cleaning table, ready for gutting. With sudsy mitts, she works me over. Then she hoses me off, which makes me feel even more like a salmon. It’s extremely relaxing. Moving from deep in my scalp to between my toes, she washes me a second time.

Stepping back out into the gritty Helsinki neighborhood, I’m clean, relaxed, and assured that – for bankers, laborers, and tourists, too – the sauna is the great equalizer.