The Galápagos Islands’ Window on Time 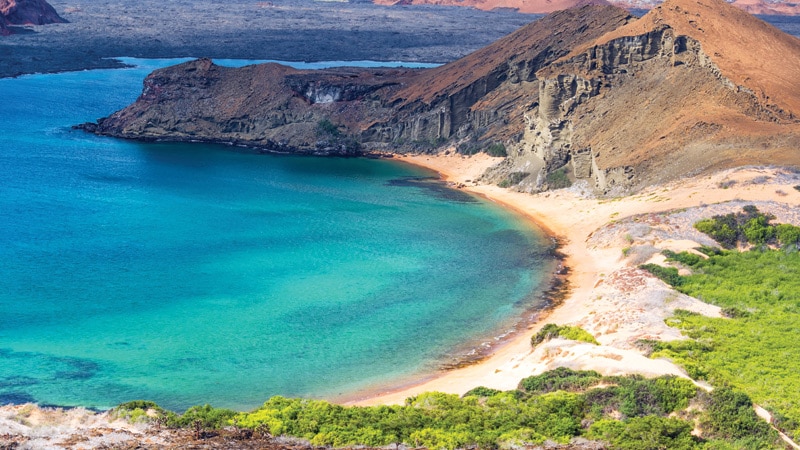 Decades after growing up on Virginia’s Eastern Shore, where I learned author Kenneth Grahame’s philosophy, “There is nothing – absolutely nothing – half so much worth doing as simply messing about in boats,” I fulfilled my fantasy of traveling to the eastern Pacific Ocean’s Galápagos archipelago.

My husband and I acted on our belief that the smaller the boat, the better; smaller boats provide more direct access to the environment, as in using a bicycle instead of a car on land. A catamaran that slept 12 (not including three crew) was the ideal choice for us: sleek “cats” provide stability and speed. Our crew motored at night – very smoothly and quietly – so we travelers could maximize our daylight hours discovering Darwin, Española, Fernandina, Floreana, San Cristóbal and Santa Cruz islands.

Discover we did: stepping within two feet of the giant tortoises, fur seals and mating iguanas, we realized the Galápagos are home not only to some of the rarest animal species but also to the most fearless. Animals here haven’t known predators for the most part, which accounts for their trust in – and curiosity about – us humans. Finches, made famous by Darwin more than 150 years ago, came to drink water from tiny pools we formed in the palms of our hands. We walked next to blue-footed boobies feeding their chicks and magnificent frigatebirds – the males inflating their striking red gular sacks to attract mates. We gawked within a few feet of albatrosses’ labored takeoffs and lumbering landings and at the intense coloration of the scavenger Sally Lightfoot crabs swimming among the rocks everywhere; volcanic terrain isn’t dull with bright highlights like these. We snorkeled but didn’t come mask-to-face with penguins as hoped: we saw them later on Isabela Island.

The crew kept us well fed on deck with local dishes such as plantain-based bolones served with spicy salsa, soups, cassava, passion fruit and the sweet quimbolito wrapped in an achira leaf.

Our conversations with people living in small numbers on some islands (Santa Cruz being the most developed island), revealed diverse opinions on commercialism and the Ecuadorian government’s strict control over tourist access. A certified tour guide must accompany all visitors; additional restrictions apply regarding the size of tour groups and the level of activity in a given area – so it’s best to make bookings ahead of time.

The Galápagos Islands are dry with a steady year-round average temperature of 77 degrees Fahrenheit. We went in late October because prices are better than a month later when high season kicks in. We opted for the smallest cat available, though that meant less private space. If my husband and I had it to do over, we would opt for the seven-day itinerary – so as to enjoy a daytime motoring experience of “simply messing about in boats.”