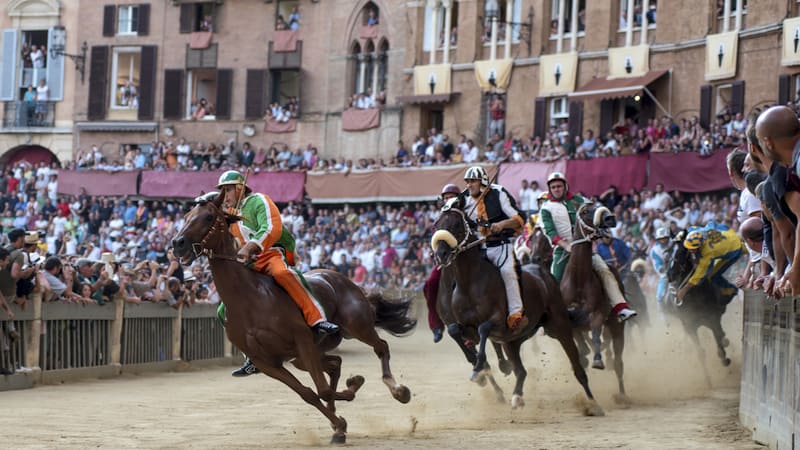 “For the Sienese life story: You’re born … there’s the Palio … and then you die.”

That’s how my friend Roberto explains the importance of Italy’s world-famous horse race, the Palio di Siena, which takes place twice every summer, on July 2 and Aug. 16. The city’s residents hurl themselves into the traditional revelry of the event with abandon. While it’s been on hold during the pandemic, I enjoy my memories from a few years ago, watching the race in person for the first time ever.

Siena is divided into 17 neighborhoods, or contrade, of which 10 are selected by a drawing to vie for the coveted Palio banner – and all-important bragging rights. Each competing contrada’s horse is chosen randomly by lottery. The neighborhood then adopts it, showering it with love, washing and grooming it, and keeping it in a five-star stable. The contrade – each with its own parish church, fountain, and square – are staunch rivals. Each contrada is represented by a mascot (porcupine, unicorn, she-wolf, and so on) and a distinctive flag. Its colors are worn and flown all year long but are omnipresent as the race nears.

While the Palio di Siena race itself lasts just 90 seconds, it’s preceded by days of festivities. As the big day approaches, processions break out across the city, including one in which the famed and treasured Palio banner – featuring the Virgin Mary, to whom the race is dedicated – is held high as it’s paraded to the cathedral. Locals belt out passionate good-luck choruses. With the waving flags and pounding drums, it all harkens back to medieval times, when these rituals boosted morale before battle.

The day before the race, I joined a crowd in the main square, Il Campo, to see the jockeys – mostly hired hands from out of town – get to know their horses in a practice run called the “charge of the carabinieri.” At midnight, the streets were filled with eating, drinking, singing, and camaraderie, as neighborhoods gathered to pump themselves up.

On race day, bets are placed on which contrada will win – and lose. Despite the shady behind-the-scenes dealing, the horses are taken into their contrada’s church to be blessed. “Go and return victorious,” says the priest. It’s considered a sign of luck if a horse leaves droppings in the church.

Meanwhile, Il Campo has been converted into a racetrack. Clay is brought in and packed down to create the surface, while mattresses pad the walls of surrounding buildings. The most treacherous spots are the sharp corners, where many a rider has bitten the dust.

The entire city of Siena packs into Il Campo. Bleacher and balcony seats are expensive, but it’s free to join the masses in the square. The well-connected get to watch from the comfort of an apartment window. Roberto’s friend, Franco, shares his apartment overlooking the racecourse – and we enjoy the best seats in town. From this vantage point, we watch as the square fills, with pageantry unfolding, flags waving, and excitement building.

Finally, it’s time. A cart pulled by oxen carries the Palio banner into the arena. The crowd goes wild. As the starting places are announced, 10 snorting horses and their nervous riders line up to await the start. Silence takes over. And then …

And then, it’s over. The winner: Lupa, the she-wolf district! We zip out into the street to join the ecstatic mobs coursing toward the cathedral. I’ll never forget the crush and the tribal energy. Just standing in the street while celebrants coursed by is a memory I’ll long cherish. The happy “Lupa-Lupa-Lupa!” horde thunders by, weeping with joy. At the cathedral, the crowd packs in, and the winning contrada receives the beloved banner. They are champions – until the next race.

Seeing euphoria overcome members of the winning contrada – it’s Lupa’s first win in 27 years – reminds me that it’s impossible for a tourist to really understand what this ritual race means to the people of Siena.

Carrying their coveted Palio banner high and hoisting their jockey to their shoulders, the Lupa contingent tumbles out of the cathedral and back into the streets, where the celebration continues into the wee hours – 500 years of proud tradition, still going strong.