Home » Travel » The Spirit of St. Francis in Assisi

The Spirit of St. Francis Lives on in Assisi

The simple friar modeled love, simplicity, and sensitivity to the environment 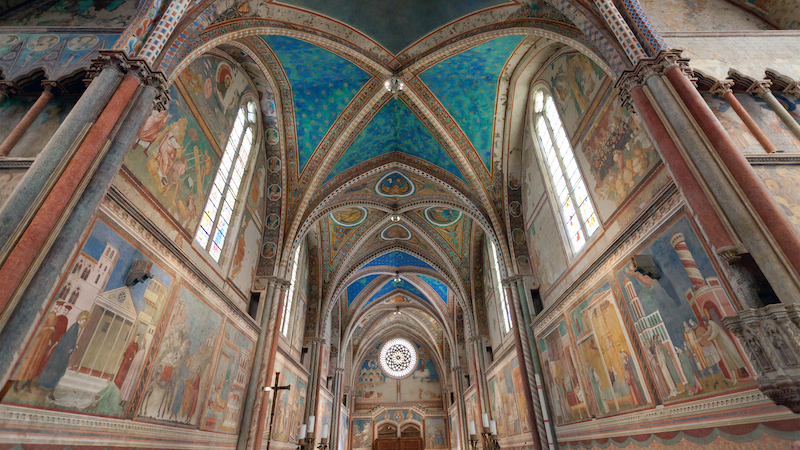 The Basilica of St. Francis – along with the city of Assisi and the Franciscan friars – inspires tourists and pilgrims today, keeping the spirit of St. Francis alive.

Charging through dark and quiet Assisi – a town stony with history – I was rushing back to my favorite restaurant for a good meal, hopefully before the kitchen closed.

At 10 p.m., the pink marble streets of Assisi shine, lonely under the lamps. It seemed the only ones out were Franciscan monks in their rough brown robes and rope belts. All over Europe I find monks hard to approach. But there’s something about “the jugglers of God,” as peasants have called the Franciscan friars for eight centuries, that this Lutheran finds wonderfully accessible. (Franciscans modeled themselves after French troubadours – or jongleurs – who roved the countryside singing and telling stories and jokes.) Franciscan brothers remind me of really smart dorm kids in the University of God … and tonight, it seemed, their studies were done for the evening.

It sounds perhaps silly, but with every visit to Assisi I’m struck by how the spirit of St. Francis still pervades his hometown. Around the year 1200, this simple friar countered the decadence of Church government and society in general with a powerful message of non-materialism and a “slow down and smell God’s roses” lifestyle.

Like Jesus, Francis taught by example, living without worldly goods and aiming to love all creation. A huge monastic order grew out of his teachings, which were gradually embraced (some would say co-opted) by the Roman Church. Christianity’s most popular saint and purest example of simplicity is now glorified in churches – known for their stark beauty. The ultimate among these is in Assisi – the magnificent Basilica of St. Francis.

The basilica is decorated from top to bottom by precious frescoes by the leading artists of the 13th century. This church brought together the greatest Sienese (Lorenzetti and Simone Martini) and Florentine (Cimabue and Giotto) artists of the day. While the scenes may seem unremarkable today, in 1300 this was radical art – showing believable homespun vignettes, with landscapes, trees, and real people.

In Giotto’s painting of the Crucifixion – with eight sparrow-like angels – holy people are shown expressing emotion for the first time in art: One angel turns her head sadly at the sight of Jesus, and another scratches her hands down her cheeks, drawing blood. Mary, previously in control, has fainted in despair. The Franciscans, with their goal of bringing God to the people, found a natural partner in Europe’s first modern (and therefore naturalist) painter, Giotto.

All this great art stands atop a crypt housing the mortal remains of St. Francis himself. The church is the target of countless pilgrims and has been for centuries. Even today, it is enlivened by the faith of the people who come to remember Francis. With the 5.5-magnitude earthquake in 1997, the church was seriously damaged. Everything’s back to normal now, except for a few blank-looking patches on the otherwise-frescoed walls and ceiling.

Francis’ message of love, simplicity, and sensitivity to the environment has a broad and timeless appeal. But every pilgrimage site inevitably gets commercialized, and Francis’ legacy is now Assisi’s basic industry. In summer, this Umbrian town bursts with flash-in-the-pan Francis fans and the city can be inundated with crass and noisy tour groups.

But if you know where to look, you can get away from that and follow in the sandal steps of the saint. Mementos of his days in Assisi are everywhere – where he was baptized, a shirt he wore, a hill he prayed on, and a church where a vision changed his life.

In the Basilica of St. Francis, along with the painted scenes from Francis’ life, you’ll find the actual document from the pope blessing Francis’s ministry (dating from 1223). And, of course, Francis’ body is interred in its crypt.

Francis met his female counterpart, Clare, in Assisi. She went on to establish the order of the Poor Clares. Her tomb and possessions are nearby at the Basilica of St. Clare.

In the Basilica of St. Clare hangs the wooden crucifix that changed Francis’ life. In 1206, an emaciated, soul-searching, stark-raving Francis knelt before this crucifix and asked for guidance. The crucifix spoke: “Go and rebuild my Church, which you can see has fallen into ruin.” And Francis followed the call.

That little fixer-upper church that Francis and his first followers tackled (the Porziuncola Chapel) is in the valley below Assisi. And the huge Basilica of Santa Maria degli Angeli, which was later built around it, reminds us that “rebuild my Church” was a much grander project than that physical remodel.

The vast majority of travelers blitzing Italy stop long enough in Assisi for a quick dash through the church and a shopping break. But those able to see past the glow-in-the-dark rosaries and bobble-head friars can actually have a “travel on purpose” experience in Assisi.