The humble queen of Cinque Terre 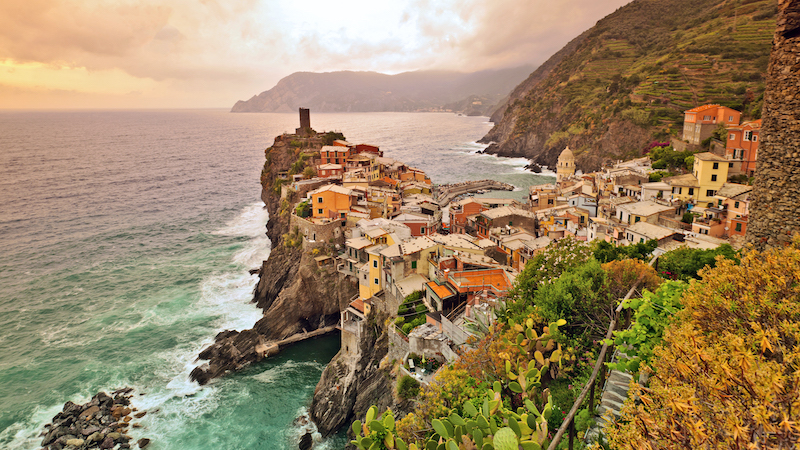 In Rick Steves’ Europe, the travel writer and broadcaster takes us to Vernazza in Italy’s Riviera, the “humble queen” and jewel of Cinque Terre.

You can search the entire Mediterranean coastline for the best rustic village, surrounded by vineyards and steeped in tradition, and not find a more rewarding escape than tiny Vernazza, my favorite of the five villages that make up Italy’s Cinque Terre.

The Cinque Terre is a stretch of Italy’s Riviera tucked into the mountainous shoreline between Genoa and Pisa. Long cut off from the modern world, this remote expanse only became easily accessible with the coming of the train.

Of the Cinque Terre’s five towns, Vernazza, overseen by a ruined castle and with the closest thing to a natural harbor, is the jewel. The occasional train popping in and out of the mountain tunnels is the only reminder that the modern world is still out there somewhere. It’s a tough community long living off the sea – and, in the last generation, living off travelers who love the sea. The church bells dictate a relaxed tempo. Yellow webs of fishing nets, tables bedecked with umbrellas, kids with plastic shovels, and a flotilla of gritty little boats tethered to buoys provide splashes of color. And accompanying the scene is the mesmerizing white noise of children at play, happy diners, and the washboard rhythm of the waves.

Vernazza’s one street connects the harbor with the train station before melting into the vineyards. Like veins on a grape leaf, paths and stairways reach from the main street up into this watercolor huddle of houses that eventually dissolve into the vines high above. A rainbow of laundry flaps as if to keep the flies off the stout grandmothers who clog ancient doorways.

At the top end of town, Vernazza’s scrawny access road hits a post, effectively a dead end for drivers. No cars enter this community of 600 people. Like the breakwater holds off the waves at the bottom of town, the post holds back the modern storm at the top. But the town’s ruined castle no longer says, “Keep out.” The breakwater is a broad, inviting sidewalk edged with boulders – reaching out into the sea like a finger beckoning the distant excursion boats.

While Vernazza’s fishing fleet is down to just a couple of boats, locals are still more likely to own a boat than a car. Boats are tethered to buoys, except in winter or when the red storm flag indicates bad seas. In that case they’re pulled up onto the little harborfront square, usually reserved for restaurant tables.

The humble town gathers around its pebbled cove, where well-worn locals enjoy some shade on benches and tourists sunbathe on the rocks. In summer, the beach becomes a soccer ground, where teams comprised of local bar and restaurant workers provide late-night entertainment.

Vernazza has two halves. Sciuiu (Vernazzan dialect for “flowery”) is the sunny side on the left as you face inland, and Luvegu (“dank”) is the shady side on the right. But from end to end, everything’s painted in one of the “Ligurian pastels,” as regulated by a commissioner of good taste in the regional government. High above, the castle – now just a tower, some broken stone walls, and a grassy park – served as the town’s lookout back in pirate days. Below the castle, an interior arcade connected houses – ideal for fleeing attacks.

Village churches are always worth popping into. Vernazza’s is on the harborfront and is unusual for its east-facing entryway, rather than the more typical western orientation. Hanging on the wall inside are three historic portable crosses – replicas of crosses that (locals like to believe) Vernazzan ships once brought along on crusades to the Holy Land. During religious processions, these crosses are taken down and carried through town.

In front of the church, a mini piazza decorated with a river rock mosaic is a popular hangout. It’s where the town’s old ladies soak up the day’s last bit of sun and kids enjoy a rare patch of level ball field.

My evenings in Vernazza are spent sitting on a bench and people-watching, either with gelato or a glass of local white wine (I usually borrow the glass from a bar; they don’t mind). During the passeggiata (evening stroll), locals meander lazily up and down the main street doing their vasche (laps). Sometimes I join in, becoming part of the slow-motion parade. Gelato in hand, I gaze up at the people looking out the windows of the faded pastel buildings like a gallery of portraits hanging on ancient walls.

Becoming part of that sleepy Riviera scene, it’s so easy to toss my busy itinerary into the sea and just be totally on vacation.