The thatched kingdom of quaint 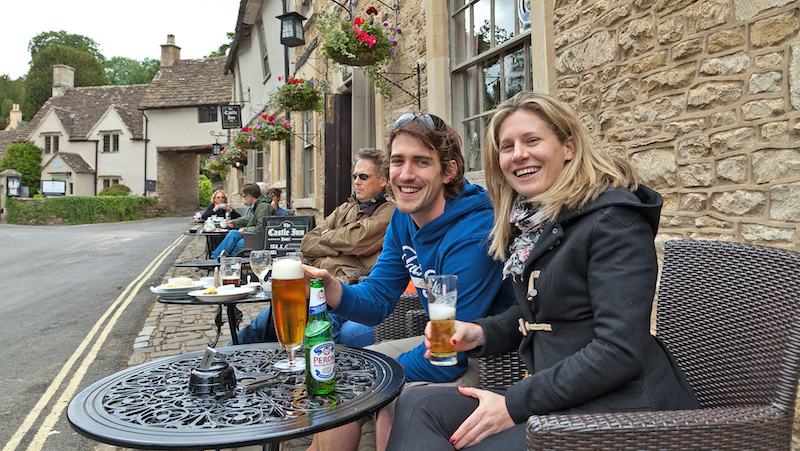 As we’ve had to postpone our travels because of the pandemic, I believe a weekly dose of travel dreaming can be good medicine. Here’s one of my favorite European memories from small-town England – a reminder of the fun that awaits us at the other end of this crisis.

The Cotswolds are crisscrossed with hedgerows, strewn with storybook villages, and sprinkled with sheep. Everything about them – the meadows, thatched roofs, churches, pubs, B&Bs, and even the tourist offices – is quaint. As a travel writer, I try not to use that word, “quaint.” But this is England’s quaintsville.

The Cotswolds are also walkers’ country. The English love to walk the peaceful footpaths shepherds walked back when “polyester” only meant two girls. Hikers vigorously defend their age-old right to free passage. Once a year, the Ramblers, Britain’s largest walking club, organizes a “Mass Trespass,” when each of England’s 50,000 miles of public footpaths is walked. By assuring each path is used at least once a year, they stop landlords from putting up fences. Most of the land is privately owned, but you’re legally entitled to pass through, using the various sheep-stopping steps, gates, and turnstiles provided at each stone wall.

In these small towns, everyone seems to know everyone. They’re all ever so polite. Chatty residents commonly rescue themselves from a gossipy tangent by saying, “It’s all very … ummm … yaaah.”

Even the villages are “quaint”

I use Chipping Campden as my home base. Just a few miles from the train station at Moreton-in-Marsh, it was once the home of the richest Cotswold wool merchants, which explains its delightful thatched and cobbled ambiance.

Nearby, Snowshill, Stanway, and Stanton are my nominations for the cutest Cotswold villages. Like marshmallows in hot chocolate, they nestle side by side.

Snowshill, a nearly edible little bundle of cuteness, has a photogenic triangular town center and a good pub. I enjoy observing the hikers, young and old, wandering through, much like the wayfarers from centuries past. And, as if standing by for the older hikers, the traditional red phone booth no longer offers a telephone … but a defibrillator.

Stanway is notable for its manor house. The Earl of Wemyss, whose family tree charts relatives back to 1202, opens his melancholy home – once so elegant and now wistful for times gone by – to visitors two days a week in the summer. His 14th-century tithe barn was where the peasants of the manor would give one-tenth of whatever they produced to their landlord. While motley peasants no longer gather here to pay their feudal “rents,” the lord still gets rent from his vast landholdings and hosts community fetes in his barn.

Stepping into the obviously very lived-in palace feels like stepping into a previous century. I see a demonstration of the spinning rent-collection table and marvel at the one-piece oak shuffleboard table in the great hall. I ask about the 1780 Chippendale exercise chair and get an answer from the earl himself. He explains, “Half an hour of bouncing on this was considered good for the liver.” He also shows me that the manor dogs have their own cutely painted “family tree,” but then admits that his last dog, C. J., was “all character and no breeding.”

Stanway and neighboring Stanton are separated by a row of oak trees and grazing land, with parallel waves echoing the furrows plowed by generations of medieval farmers. Driving under a canopy of oaks and past stone walls and grazing sheep to get to Stanton is a joy.

In Stanton, flowers trumpet, door knockers shine, and slate shingles clap – cheering me up the town’s main street. The church, which probably dates back to the ninth century, betrays a pagan past.

Stanton is at the intersection of two ley lines (considered by many to come with mystical powers) connecting prehistoric sites. Churches such as this one, built on pagan holy ground, are dedicated to St. Michael – the defender of the Church against pre-Christian spiritual threats. Michael’s well-worn figure is above the door. Inside, I take a seat in the back pew and study the scene. Above the capitals decorating the columns leading to the altar, I see the pagan symbols for the moon and the sun.

But it’s Son worship that’s long established here; the list of rectors behind me goes back to 1269. I finger the grooves cut into the finely carved end piece of the pew, worn away by sheepdog leashes over the generations. Even today, a man’s sheepdog accompanies him everywhere. Some things never change, especially in the Cotswolds.