The 2021 Oscars: reflecting the present and portending the future

The Oscars weren’t good, but they channeled a movie industry in transition 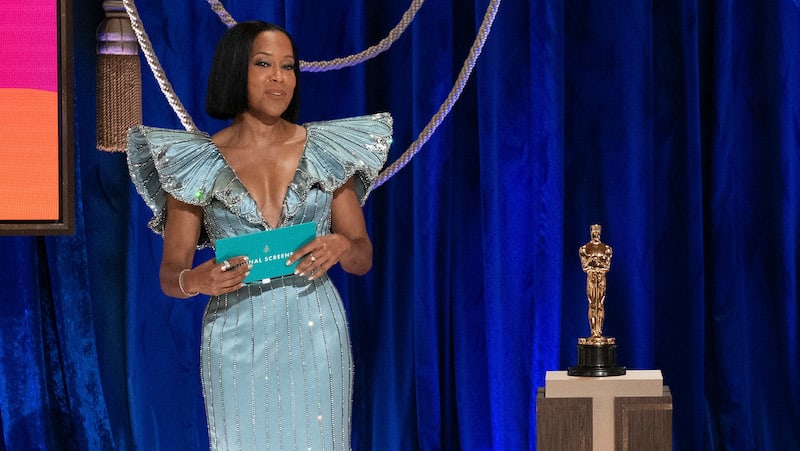 There are two ways to view this year’s Academy Awards telecast. One of them isn’t pretty. The other is strangely … hopeful. But both speak to the powerful transitional moment in which the movie industry is now caught.

This year’s Oscar night, by bending over backwards to “reinvent” itself, wound up as a weird kind of dull fizzle. There was no snarky, let’s-bait-the-stars opening monologue – which seemed, in theory, an enlightened way to go following a year of unending casualty and turmoil. But after not too long, you began to crave the oxygen of a few jokes, anything to lighten the samey-same mood of social-political reverence and speeches that droned on without end.

The decision to introduce a lot of the nominees with spoken thumbnail biographies threatened to turn the night into the Wikipedia Oscars. And though Union Station, an Art Deco landmark dotted with sunlit windows and abstract art, proved to be a gorgeous setting, watching the talent sit there in all those velvet banquettes just made the ceremony feel glazed, hermetic, like an elite cabaret cut off from a mass audience that was already scratching its head over too many of the nominated films.

Steven Soderbergh, the telecast’s co-producer, promised to play around with the Oscars but wound up deconstructing them, turning the awards into a high-minded British garden party. At a certain point I realized I was actually missing the Zoom acceptance speeches from home we saw during the Golden Globes. At least they had a rude spontaneity.

This year’s Oscars added up to a canny balancing act, dancing between the restrictions required by COVID-19 (no oversize auditorium) and the promise of a post-lockdown world (in-person ceremony with no masks!). The camera bobbed and flowed like a voyeur on a movie set, and Questlove laid down a groove that tantalized our sonic cinematic memory banks. And by cutting down on the snark, the ceremony showcased the nominated films with an enraptured pride, presenting Hollywood’s image-making mythology as the vanguard of a moral revolution (which, in fact, it often has been).

It’s true that the movies being honored weren’t popcorn hits, yet most of them were passionate and potent dramas that touched a nerve in those who saw them. In honoring “Nomadland” and “The Father,” “Promising Young Woman” and “Judas and the Black Messiah,” the Academy demonstrated that even in this pandemic year, with just about all the sexiest, high-profile movies cruelly put on hold and cut out of the picture, the industry could offer up a vibrant roster of films it believed in.

The future of movies

Given the historically low ratings for this year’s Golden Globes and Grammy Awards shows, it was all but preordained that the Oscar telecast would, of course, follow suit and generate in-the-basement viewer numbers. Yet too many have been eager to pounce on those cliff-drop ratings as evidence that the Oscars – and, just maybe, the movies – are dying on the vine. For this was a very special year. In the same spirit, too many are now eager to declare, amid the anomaly of a pandemic, that going to a movie theater is becoming the horse-and-buggy experience of our time, just waiting to be put out to pasture by the cathartic convenience of the streaming revolution.

Sorry, but there’s more to life than convenience. There is also excitement, the thrill of collective experience (i.e., being part of an audience) and the grand intoxication of art. It’s trendy to see the future of movies as a matter of inevitable “market forces,” but it’s not like some preordained algorithm will determine whether or not people continue to seek out movies in theaters, and what those movies will be. To quote a corny old song: It’s a choice we’re making. Despite wins in seven categories, Netflix, at the Oscars, went another year without taking home the headline prizes they seek, and maybe that should tell us something. Maybe Netflix should stop working so hard to triumph in the movie awards and kill movies as we know them at the same time.

Should the movies now just become spectacle: the equivalent of a gladiatorial contest or a trip to the CGI planetarium? Many say so. But if you eat nothing but popcorn, you should probably see a doctor, and Hollywood, by serving nothing but popcorn, could wind up starving itself. If what we now call movies for adults (what we used to just call, you know, movies) becomes the sole province of Netflix and other streaming services, those movies will be seen (sorry, but there’s no other phrase for it) as TV-movies, and they will become trivial, shoddier in quality (since they don’t have to come close to being great to fulfill a streaming service’s metric priorities), and the magic of movies will wither.

Where are they now? Celebrities, nostalgia, memories … check out the Boomer Nostalgia department!

The movies that won Oscars this year were not “great escapes.” Not the way the films of old Hollywood were; not the way a terrific James Bond movie is. Yet I would gladly take “Nomadland,” with its finely cut empathy and ravaged spirit of survivalist adventure, over such venerable and stodgy past Oscar winners as “Out of Africa” or “The English Patient.” The film confirmed Chloe Zhao as a major voice (and Frances McDormand as the flinty voice of our underlying desperation), and it spoke to a year when people couldn’t escape, when just hanging on was as dramatic as it got.

That said, there’s never been a year quite like this year. And one of the key messages – of the Oscars, and of the streaming revolution – is that it’s time for Hollywood to take the high and the low and put them back together, to enlighten audiences while entertaining them, to provide an experience you want to escape your home to seek out. In that sense, this year’s Oscars, full of reverence but purged of show business, elegant and lofty but missing that crucial spark of vulgarity, were not just a stopgap but a lesson, a warning, almost a vaccination. The ceremony said: Yes, this is what the Oscars look like after a year of lockdown. And no, we can’t do this again. Instead, it’s time to do what the movie industry has done so many times before, usually better than anyone. It’s time to go back to the drawing board.