Plus a surprising actress makes her film debut 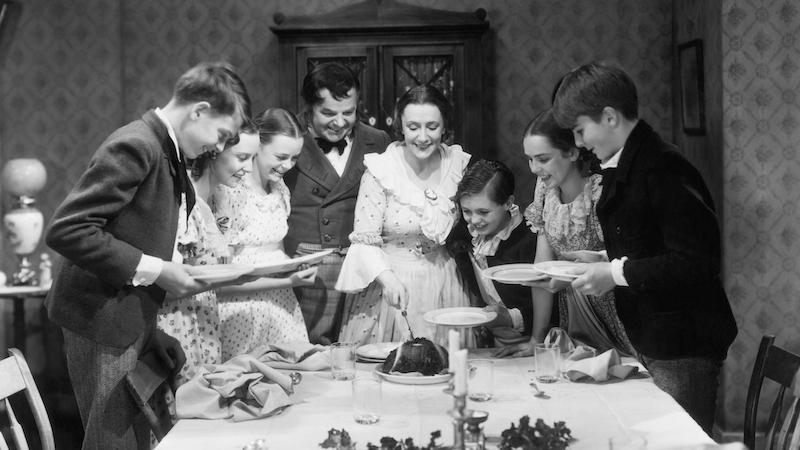 Nostalgia writer Nick Thomas writes about his favorite version of Charles Dickens’ classic holiday tale – “A Christmas Carol” 1938 movie – and of a surprising young actor who made her film debut, appearing beside her parents.

No fictional Christmas story from English literature has been produced in so many versions on stage, in film, or on television as the Charles Dickens 1843 novella “A Christmas Carol.”

In television adaptations or parodies alone, the transformation of a miserly Ebenezer Scrooge-like character has been reworked in episodes of classic animated series featuring characters such as the Flintstones, Bugs Bunny, and Mister Magoo. Numerous live-action series as varied as “Bewitched,” “Xena: Princess Warrior,” “Doctor Who,” and “General Hospital” have likewise borrowed the story’s theme for episodes.

On film, a silent version of “A Christmas Carol” was produced as early as 1908 featuring the prolific British-born actor Tom Ricketts as Scrooge. In feature films or TV movies, numerous other actors tackled the role, including Alastair Sim (1951), George C. Scott (1984), and Patrick Stewart (1999).

But for me, the most enjoyable retelling of the popular Christmas tale will always be the 1938 MGM version with Reginald Owen as Scrooge, which Turner Classic Movies will broadcast several times this month (upcoming dates: December 21 and 24, according to the TCM online schedule at time of publication).

Owen, who replaced an ailing Lionel Barrymore, is delightful as Scrooge. And while there are many changes from Dickens’ darker original story, the ’38 version is a charming Christmas fantasy for all the family. What also makes this adaption stand apart for me is the appearance of real-life husband and wife team of Gene and Kathleen Lockhart, who co-star as the Cratchits. And as a bonus, it’s also the film debut of their 13-year-old daughter, June Lockhart, who utters her first amusing words in a motion picture as Belinda Cratchit.

“My daughter, Junie, and granddaughter, Christianna, have never let me forget that the first words I ever spoke in movies were: ‘I know, I know – sausages!’ It’s become a family joke and we all shriek with laughter when we watch it now,” Lockhart told me in 2011.

Running just under 70 minutes, the film had no formal premiere when released.

“The studio just put it out as a program filler with their feature Christmas movie for that year,” explained Lockhart, who turned 96 this past summer.

“A Christmas Carol” was not just the first movie June appeared in with her mom and dad, it was her only screen appearance with either parent, although she did work later with them in the theater and with her father on some live television and TV panel shows.

“When MGM made the movie and my parents were hired, they asked if I wanted to be one of the children,” she recalled. “I said of course. It just seemed a natural thing for me because my family had been performing it at home for years.”

Every Christmas, the Lockhart clan would gather with friends and perform the story in their living room from a script June’s father adapted. Guests included Leo G. Carroll, best-known as Mr. Waverly in the 1960s TV spy series “The Man from U.N.C.L.E.,” who was always “Uncle Leo” to young June. He was cast as Marley’s ghost in the 1938 movie.

However, working in the film did leave June with one unpleasant memory.

“I do remember feeling quite nauseated on the set one day from something I had eaten the night before,” she recalled. “Then they placed a bowl of mashed parsnips in front of me during the Christmas dinner scene. The stench made me so ill, the prop man had to replace the dish with potatoes. I’ve avoided parsnips ever since!”

That piece of June Lockhart trivia may amuse “Lost in Space” fans who fondly recall her as cast member and space-mom in the popular 60s sci-fi series and, specifically, in one of its silliest episodes: “The Great Vegetable Rebellion”!

Notwithstanding her teenage veggie digestive issues, Lockhart says “A Christmas Carol” always had a sweet spot in the hearts of the Lockhart family.

“It’s grand to see it on TV every year,” she said. “It certainly lives on as a charming little picture.”

CAPTION OF IMAGE ABOVE: June Lockhart, third from left, in “A Christmas Carol” with her real parents, Gene and Kathleen Lockhart – MGM

Nick Thomas teaches at Auburn University at Montgomery, Ala., and has written features, columns, and interviews for many newspapers and magazines. He first interviewed Lockhart for his 2011 book “Raised by the Stars: Interviews with 29 Children of Hollywood.”