A Look at 'All the Powers of the Earth'

New book by Sidney Blumenthal can shed light on 2019 politics 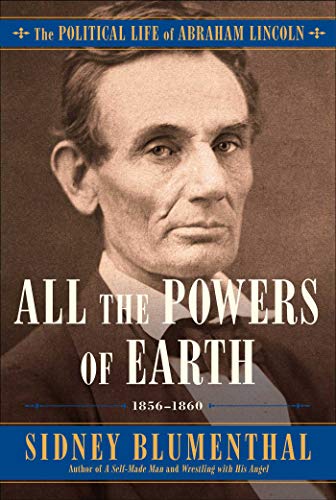 Whether you’re a history buff, a concerned U.S. citizen or a student of strong moral leaders, All the Powers of Earth: The Political Life of Abraham Lincoln Vol. III, 1856-1860 (3)

is for you. Sidney Blumenthal’s latest book covers Lincoln’s ascent to power during a critical time in our nation’s history – a time not unlike ours.

Blumenthal divides the book into two parts: “The Present Crisis” and “The Rise of Abraham Lincoln.” He begins with a look at the uneasy peace that was supposedly achieved by the Compromise of 1850, a peace that readers know will soon be shattered.

He shows us Abraham Lincoln’s state of mind after being voted out of Congress after one term because of his opposition to the Mexican-American War. “Isolated in his two-man office in Springfield,” Blumenthal writes, “he gloomily stared for hours as he contemplated a life he considered would be insignificant. ‘How hard, oh! How hard it is to die and leave one’s country no better than if one had never lived for it!’ he despaired.” And Blumenthal shows how Lincoln rises out of his despair to take action.

In his comprehensive examination of both Lincoln and the context of the time, Blumenthal looks at Stephen Douglas, whose desire for power was fierce and ignoble and who became Lincoln’s primary adversary, and other powerful and savvy politicians that Lincoln was pitted against.

The author shows the roots of the Slave Power, which linked business interests, raw racism, sexual hypocrisy, brutality and a fierce desire to grow its geographic borders. He shows the reader the vicious beating of abolitionist Senator Charles Sumner of Massachusetts on the floor of the U.S. Senate by Congressman Preston Brooks of South Carolina, the pro-slavery Dred Scott decision by the U.S. Supreme Court, and the attack on the federal arsenal at Harpers Ferry by anti-slavery zealot John Brown – events that contributed to raising the nation’s political temperature to the boiling point.

As we witness the tensions in 2019, as we witness demagogues who seem more interested in power than democracy, as conflicts spill beyond D.C. and into the community, Blumenthal’s portrait of Lincoln’s campaign is timely.

What lessons can we apply today? Can we compare Lincoln’s campaign with the 2020 presidential campaign? What can we make of parallels between the 19th and 21st centuries in terms of anti-immigrant nativism and racism, a dysfunctional presidency and a reactionary Supreme Court?

During Lincoln’s fight for the presidency, old political parties were falling apart. To save the Union, Lincoln had to build a new party and confront Douglas. What does Lincoln’s response have to teach us?

Blumenthal’s book doesn’t provide the final answers, but provides rich information for history buffs and insights for concerned U.S. citizens. Hopefully, some strong moral leaders will read it and determine a course of action that can ultimately help heal our nation.

Sidney Blumenthal is the author of the first two volumes in his five-volume biography, A Self-Made Man and Wrestling with His Angel. He is former assistant and senior adviser to President Bill Clinton and senior adviser to Hillary Clinton. He has been a national staff reporter for The Washington Post and Washington editor and writer for The New Yorker. Other books include The Clinton Wars, The Rise of the Counter-Establishment, and The Permanent Campaign. Born and raised in Illinois, he lives in Washington, D.C.

All The Powers of Earth: The Political Life of Abraham Lincoln, Volume III, 1856-1860, by Sidney Blumenthal

Available in hardcover (784 pages) and ebook