Home » Lifestyle » A Look at the People and Raptors of Falconry

A Look at the People and Raptors of Falconry

Getting up close with the hunters of the sky 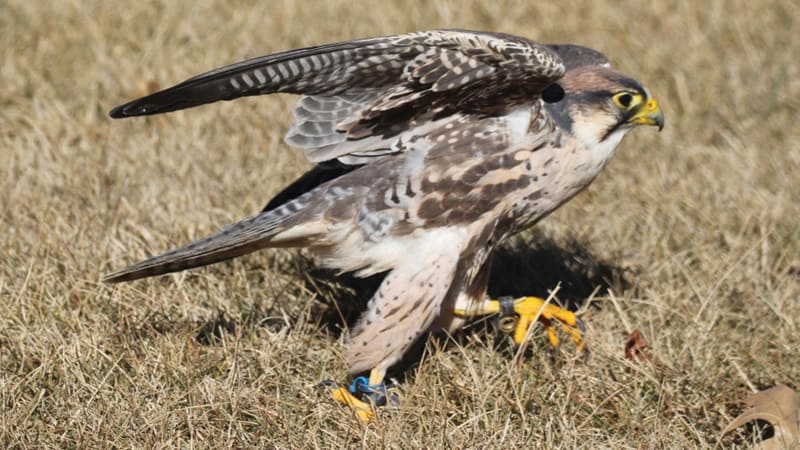 With lightning speed and amazing agility, falcons are premier hunters among our North American birds of prey. Diving for prey, a peregrine falcon can reach a speed of nearly 200 miles an hour, executing a strike with pinpoint precision.

To witness falcons’ dazzling performance up close, I headed to Harrisonburg last January to attend a field meet of the Virginia Falconers’ Association (VAFalconers.com), an annual winter event that draws hawk and falcon aficionados from across the commonwealth.

During the weekend event, there were plenty of lively discussions about the sport of falconry. Listening to the falconry aficionados, it’s impossible to overstate the bond that develops between a bird and its steward and caretaker. It’s not easy being a falconer: the steward must exercise birds several times a week to provide in-flight excursions to express their hunting instincts and maintain agility and train each to return promptly during hunting sorties.

An enthusiast begins the falconer journey by finding a veteran sponsor who is sanctioned by the Virginia Department of Game and Inland Fisheries (DGIF) and commits to a two-year training stint. Then comes a DGIF test to earn a falconry permit, followed by many hours of in-flight training with the bird for behavioral reinforcement and exercise.

I didn’t know much about the sport of falconry, so I was surprised to find that other birds of prey are used besides falcons, including red-tailed, red-shouldered and Harris’s hawks.

Among ardent falconers, hybrid hawks are often the raptor of choice, combining the best of two species’ temperaments and hunting characteristics. An internet search revealed some rather unusual combinations, such as Cooper’s-goshawk, peregrine-goshawk, and a very unlikely hybrid Harris’s hawk-golden eagle raptor!

Although the birds at the Harrisonburg field meet were not quite so exotic, a high point was when nine seasoned falconers gathered in the Harrisonburg Ramada Inn parking lot, took their birds from cages and leisurely strolled among the audience. This parade gave visitors very close-up looks at some fearsome-looking, stunning raptors posed atop shielded arms.

While the group of raptors included a peregrine or two, standouts were several Harris’s hawks, a bird of prey with a dark chocolate-colored body and burnt-orange wing patches. Harris’s hawks are handsome birds that hunt in packs; their usual range is the southwest region of the U.S. I’d seen Harris’s atop telephone poles in Texas many times, but up-close the birds are exquisitely regal.

The feature of the meet was a demonstration of falconry and flight dynamics by Jennifer Westhoff, a master falconer and rehabber, whose peregrine amazed fellow falconers and spectators alike. Westhoff put her falcon, named “Goober” (aka “Bubbles”), through its paces in an open field near the motel. The 2-year-old bird sped back and forth across the landscape, often climbing and hurtling downward in dazzling dives. When he ventured afar, we wondered if he’d ever return.

Time after time, Goober would speed away from us, sometimes reaching a distant warehouse rooftop or half-heartedly giving chase to a surprised pigeon. The falcon seemed to enjoy the freedom of flight mixed with brief pursuits.

Goober recognized his steward’s call even when he was out of sight and tore back to Westhoff. As he returned at full speed just a few feet off ground, he would adeptly twist and turn among us before landing at Westhoff’s feet. The exhibition of speed, agility and the special bond between falconer and raptor was both astonishing and entertaining.

Master falconer Westhoff is the proprietor of Raptor Hill, a private wildlife sanctuary in the Shenandoah Valley (RaptorHill.com). She provides personal encounters with a variety of raptors at private events such as weddings, parties, summer camps and classrooms. Her events are entertaining and educational, as she explains the intricacies of falconry and demonstrates her raptors’ hunting prowess.

Besides Goober, her team includes a barn owl, red-tailed hawk, Eurasian eagle-owl and both Eurasian and American kestrels.

Westhoff and Goober are regular performers at Salamander Resort in Middleburg (SalamanderResort.com) and Massanutten Resort in McGehaysville (MassResort.com), where spectators can participate in a family falconry experience. (Other things to do in Massanutten: BoomerMagazine.com/massanutten)

If you have a yen to see falconers with their birds of prey up close, you’ll want to attend a falconry meet. You can find details at VAFalconers.com.

BIRDS OF A FEATHER

As we head into winter, there are several activities that will help you get through the winter doldrums.

First, you can participate in Cornell Lab’s Project FeederWatch, a citizen-science project from November through early April where you track birds that visit your feeders. FeederWatch.org

Second, get ready for the Great Backyard Bird Count, a citizen-science activity sponsored by Cornell Lab and the National Audubon Society, a four-day event (Feb. 15-18) to count birds for at least 15 minutes each day anywhere you’d like: backyard, neighborhood park or wherever. For details, go to GBBC.birdcount.org/about or BirdSleuth.org/gbbc.

Lastly, three nearby birding festivals are scheduled over the winter months for you to enjoy:

For 20 years, Jerry Uhlman has been writing about birding and travel. His stories have appeared in a variety of publications, including his “Flyways & Byways” column in the Richmond Times-Dispatch, Bird Watcher’s Digest, BirdWatching, Living Bird, and the American Birding Association’s Birding Magazine. His book, A Birder’s Guide to Metropolitan Richmond, covering top local spots for birdwatching and the species to look for, is available at Lewis Ginter Botanical Garden, Wild Birds Unlimited, Yardbirds, Wild Bird Center of Midlothian and Bird Watchers. Flyways@verizon.net