Depths of Resilience, Heights of Achievement 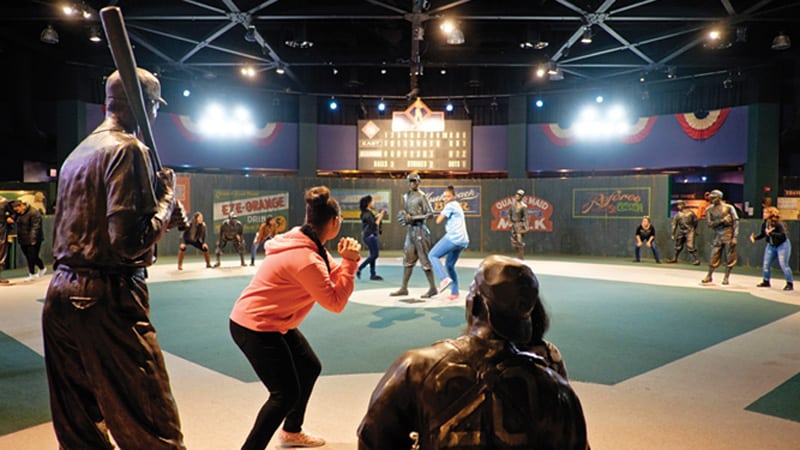 As a people who have spent centuries fighting for empowerment and equality, African-Americans hold a history that’s deep, often sad and always rich.

Museums and monuments across the country now commemorate the good, the bad and the ugly parts of this history, including the significant moments and momentous figures that brought this collection of people from being property to claiming a president.

The Negro Leagues Baseball Museum allows you to immerse yourself in the African-American side of our all-American sport while telling the stories that history books gloss over. The museum shares the saga of African-American (and to a lesser extent, Latino, professional baseball players, with sections commemorating both the all-stars and the benchwarmers. The exhibits are primarily self-guided, hands-on displays that allow you to step up to the plate as you step back in time.

See the timeline of African-American history and baseball history between the 1860s and 1960s. Learn about the desegregation movements within the sport and meet former Negro League players face-to-face … well, the bronze version of them, anyway.

Since our country’s beginning, the clash of slavery and freedom has erupted in many forms. Exploring various facets of this battle, the National Underground Railroad Freedom Center goes into depth on the history of oppression and how these events have shaped our country today.

See how slaves lived in the 18th and 19th centuries. Learn about the extreme measures they took to escape to freedom. Then explore the moment in time when freedom became a reality for African-Americans … and the challenges that it carried. While traveling along the timeline of slavery, the museum features the courageous figures who fought to make freedom possible, including Harriet Tubman, John Brown, John Parker and Rosa Parks.

Though the exhibits show the perils of slavery throughout the period, the museum does not dwell on our dark past. Instead, the final message is one of urgency and resolve to end the slavery and human trafficking still happening around the world today.

Take a visual journey of this courageous race, and see our country and its history through an entirely new lens.

THE GRIOT MUSEUM OF BLACK HISTORY

In some West African countries, a “griot” (pronounced gree-OH) is a storyteller, a historian, a keeper of oral tradition; which is exactly what the Griot Museum of Black History does, too. Along with art and memorabilia, it uses wax figures to tell the stories of momentous figures in African-American history: Dred and Harriet Scott, Miles Davis and Martin Luther King Jr., to name a few.

And to help you put yourself in the shoes – or perhaps, shackles – of 17th-, 18th- and 19th-century slaves, the Griot features an original slave cabin, transferred from the Wright-Smith Plantation in Missouri. Also on display is a reproduction of a ship used in the Atlantic Slave Trade, to depict the appalling conditions endured by slaves transferred from Africa to America.

This quaint museum is small but powerful, utilizing the strength of storytelling to recount thousands of untold narratives.

But you don’t have to travel out of state – or even out of city – to immerse yourself in powerful African-American history. The Black History Museum and Cultural Center at 122 W. Leigh St. is a great place to start. It serves as Richmond’s richest source for collections of art, stories, records and artifacts that commemorate the accomplishments of African-Americans in Virginia.

Just down the street is the Maggie Walker House, with exhibitions honoring the life and accomplishments of our nation’s first black female banker.

Both institutions just happen to be located in the historic black neighborhood of Jackson Ward. Deemed the Harlem of the South, this neighborhood once buzzed with African-American businesses, restaurants, theaters and residents.

Continue your history-filled journey to Farmville at the Moton Museum. Once the school that launched the Civil Rights revolution among students (does the name “Barbara Johns” ring a bell?), Moton Museum now serves as a historical landmark and museum, telling the story of hundreds of brave students who fought for segregation and equality.

And don’t forget about the darkest part of African-American history: slavery. In years prior, historic sites have often downplayed this sinister time in our past. But now, more light is being shed on slavery and giving it the unfortunate attention that it deserves.

At Monticello and Montpelier, for instance, visitors can see reproductions of slave cabins, explore labor conditions and hear true accounts through historical re-enactors. Maymont Mansion also provides tours of its “belowstairs” area, to show how the servants (predominately black) lived and worked each day under the regulation of the wealthy Dooley family. And Richmond has worked in recent years to revive slavery-focused historic landmarks, such as the Richmond Slave Trail and Lumpkin’s Jail, both located in Shockoe Bottom.

African-Americans have roots in Africa but are as American as any U.S. citizen, so this history is important to all. By better understanding the past, we can build a better future together.