Yorktown Museum Rebranded and Better Than Ever

The American Revolution Museum at Yorktown 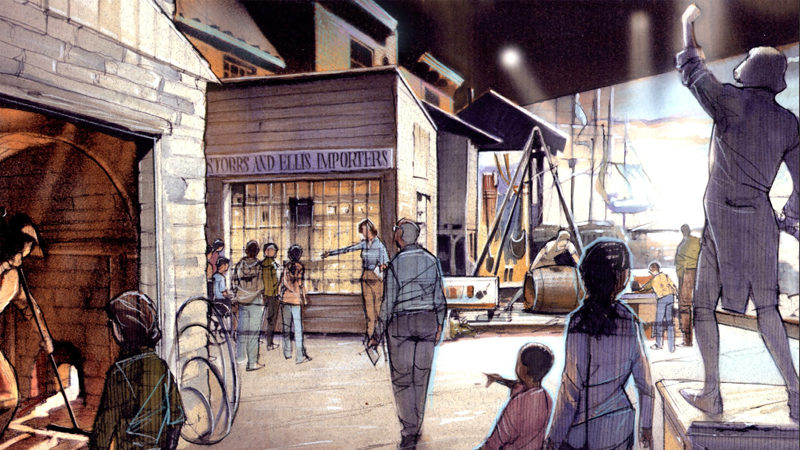 If you haven’t been to Yorktown’s history museum lately, you haven’t been. What used to be called the Yorktown Victory Center, which opened in 1976 as one of three Virginia visitor centers for the American bicentennial, is now called the American Revolution Museum at Yorktown, debuting Oct. 15-16, 2016. Besides a new name, the museum is housed in an entirely new, 80,000-square-foot building, presenting a multitude of new artifacts, exhibits, interactive displays and films.

A collection of photographs greets visitors upon their arrival, photographs of everyday people from throughout the colonies who played minor but important in the American Revolution. “I was there,” these colonists proclaim. The historic characters, who reappear throughout the galleries that follow, include George Hewes, witness to the Boston Massacre; Isabella Ferguson, Irish immigrant and American patriot; Peter Harris, Catawba Indian and soldier; and Billy Flora, African-American soldier and hero of the Virginia Battle of Great Bridge.

In learning the stories of these “ordinary people in extraordinary times,” visitors get “underneath the skin” of the Revolutionary War, explains Peter Armstrong, senior director of museum operations for Jamestown-Yorktown Foundation. As a British citizen and a veteran of museum management, Armstrong contributes a useful perspective to the story of the conflict between Great Britain and the American colonies.

The focus on everyday people answers the question, why did the ordinary person support a war for independence? Without a certain increase in individual wealth or political power, what did they have to gain? The answer is addressed in the museum’s introductory film: “Liberty Fever.”

The galleries of the 22,000-square-foot permanent exhibition begin at the end of the French-American War, which helped shape what followed. The narrative moves through the colonists’ rising discontent with British rule, the ideas and philosophies that gave substance to the patriots’ decisions, the war’s battles and weapons, slavery and encroachment upon Native American lands, and the early years of the new nation and its young government. Scenic environments have been recreated for a more immersive experience.

Though the historical tale does not overlook pivotal players such as Patrick Henry and George Washington, it is in tune throughout to the refrain of everyday life and people.

While aiding understanding and retention, interactive displays make the history lessons even more enjoyable: a life-size vertical touch screen delves into the stories of the museum’s recurring characters; touch-screen maps explore the 13 colonies and notable battles; and the Battle Game table gives visitors a chance to “command” the troops.

One of the museum’s most memorable experiences takes place in an experiential theater. Action within “The Siege of Yorktown” film surrounds the audience on a 180-degree screen – through battles and thunderstorms, behind the lines on the battlefield and at Cornwallis’ base of operations. Multisensory effects punctuate the scenes: explosions and thunder vibrate within the benches; fog rises from the floor; and the scents of seawater, coffee and gunpowder fill the air.

Yorktown’s outdoor living-history areas – a Continental Army encampment and Revolution-era farm – and costumed interpreters further educate and entertain visitors. The foundation continues to make improvements to these outdoor areas, including an amphitheater for artillery demonstrations and drill field, which it expects to complete by spring. Opening celebration is scheduled for March 23 to April 4, 2017.

The rebranded and improved museum is part of a master plan adopted by the Jamestown-Yorktown Foundation in 2007, funded by the Commonwealth of Virginia, York County and private donations.