The Auto-Train: You'll Never Drive All the Way to Florida Again

The Dog Story: Excerpt from the book by local author Doug Ridell 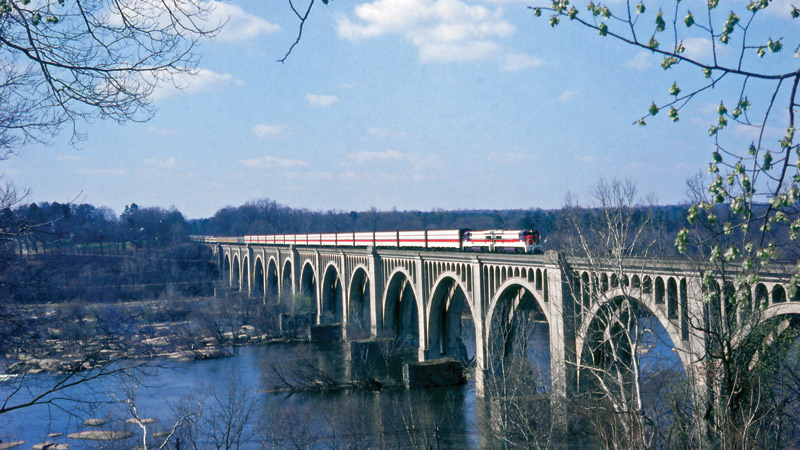 Armed with a government study indicating that dedicated overnight trains carrying passengers and their automobiles between the blustery northeast and sunny Florida could be profitable, 31-year-old attorney Eugene K. Garfield convinced investors to bankroll creation of the Auto-Train in 1971.

A premium fare service catering to a ready-made market of affluent New York snowbirds, Auto-Train Corporation immediately became the darling of Wall Street, flourishing for the first four of its 10-year operation, before poor business decisions and costly derailments proved to be its undoing. Before filing for Chapter 11 bankruptcy, a desperate Garfield even sought financing from Vegas hotels and was nearly duped in a swindle involving a Swiss bank. The last original Auto-Train departures were on April 30, 1981.

Amtrak subsequently acquired its assets in 1983, resurrected the dormant Auto-Train with its own equipment, personnel and national marketing clout. The stellar service now rolls along proudly as Amtrak’s flagship. It’s not quite the same, however.

Garfield’s original Auto-Train patrons were pampered in luxurious, glass-topped coaches, sleeping cars and diners. They feasted on beef wellington and lobster while sipping complimentary wines. Everything from uniforms to fabrics on the avant-garde red, white and purple-painted express were custom-designed. The train’s Starlight Lounge entertainer inspired a recurring skit on “Saturday Night Live.” Bill Murray starred as Nick Rails.

Auto-Train’s youthful staff of handsome guys and gorgeous gals still look as though they answered a Hollywood casting call when they periodically gather for reunions, 35 years after the train’s demise. Their shared memories unleash a wave of laughter, lasting into the wee hours of the morning.

Their uncontested favorite, “The Dog Story,” is always narrated by Robert Lyon. A sleeping-car attendant on his very first trip, Lyon was told that the southbound Auto-Train would make its sole servicing stop in Florence, South Carolina, at exactly 3:00 a.m. About 15 minutes prior, he was to awaken all passengers who wished to exercise their dogs, which were permitted in the sleepers.

When the train stopped at exactly 3 a.m., Robert detrained five gentlemen in their slippers, pajamas and robes to walk their pets. The train unexpectedly began moving. The Auto-Train was not in Florence, South Carolina, but instead had halted briefly at some point in North Carolina to meet another train.

Robert, who remained aboard in the sleeping car vestibule, tugged twice on the signal cord – a call to the train’s engineer to immediately stop. Nothing happened. He then began frantically searching for the train’s conductor, who was in the lounge car, finalizing his work report in preparation to detrain at Florence where another conductor would take over. Due to a shortage of radios, however, he’d given his to the train’s flagman. By the time Robert found the flagman, the Auto-Train was stopping in Florence, minus the five passengers, who were traipsing around, in their nightclothes, with their pets, somewhere in the wilderness of North Carolina.

The train dispatcher was immediately contacted and managed to find a railroad employee, in a motor vehicle equipped with flanged wheels, who was following the Auto-Train, inspecting the tracks. Before long, he came upon five enraged men in their pajamas and bedroom slippers, walking their yelping dogs. Packing them tightly inside his vehicle, he delivered them to Florence, where the train was being held pending their arrival.

Personally, the author would have paid good money to have witnessed the scene when those affluent New Yorkers met up with the railroad employee – a good ol’ boy – who discovered them and their dogs in the middle of the tracks, shivering in their night clothes. “What’ll them damn Yankees do next?” he must have wondered, shaking his head in utter bewilderment.

The story doesn’t end there, though. Some years later, traveling north of Washington on an Amtrak train during the Christmas holiday season, Bob Lyon happened to meet a former Auto-Train employee, now working as a lounge car attendant on Amtrak’s northeast corridor. The two arranged to sit down together for a few minutes when the attendant was scheduled to take a break. The Amtrak train’s conductor was introduced to Bob and joined in the conversation, which, of course, resulted in the infamous dog story being told yet again. Suddenly the conductor’s radio crackled. “Captain, we’ve got a situation here. You know that new engineer we’ve got? Well, he missed that station stop we were supposed to make at Newark, Delaware. We just shot right past all those people on the platform with their Christmas presents.”

With tears streaming down his cheeks, Robert Lyons laughed. “It’s nice to know, after all of these years, I still possess the ability to totally disrupt the operations of a major railroad with that dog story.”

Auto-Train is a 224-page hardback book with nearly 400 color and black-and-white photos and illustrations, produced in cooperation with the Richmond, Fredericksburg & Potomac Railroad Historical Society. It is available through retailers and can be purchased directly from the society on their web page or by mail at RF&P RR HS, P.O. Box 9097, Fredericksburg, VA, 22403-9097. The price is $60 plus $7 shipping and handling. Virginia residents add $3.18 sales tax.

Retired Amtrak locomotive engineer and company photographer Doug Riddell is a Richmond native and former broadcaster, who received his B.S. in Mass Communications from VCU. A rail industry columnist, Riddell has most recently commented on transportation issues for CBS, CNN, MSNBC and the BBC. An author and frequent contributor to local, national and international publications, Doug and his wife, Sandy, reside in Ashland. This is his fifth appearance in Boomer.