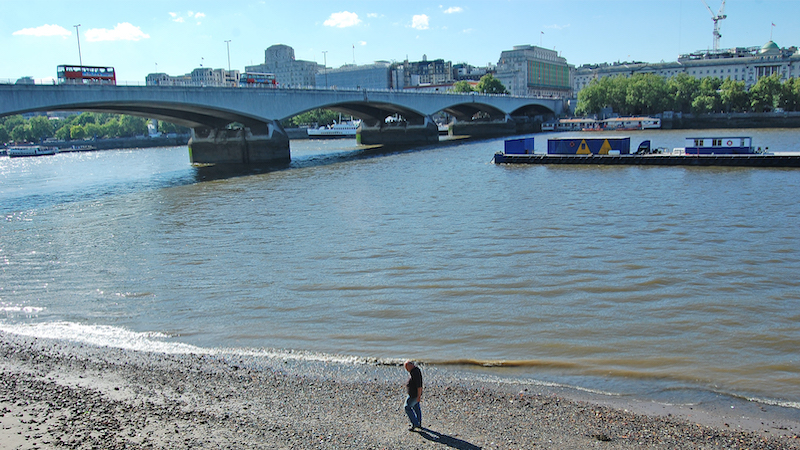 Travel writer Rick Steves takes us beachcombing through London history, both figuratively and literally – along the banks of the tidal Thames River.

I’ve spent more time in London than in any other European city. Its people, its traditions, and its history keep drawing me back.

In England, history means museums, churches, and castles. But my favorite ways to learn history don’t always require entry through a turnstile.

Strolling with a good local guide is like beachcombing. I pick up obscure shards of a neighborhood’s distant past, unlocking unexpected stories. On a bright, brisk January morning, I join David Tucker, who runs a tour company called London Walks. Walking through London with him epitomizes the metaphor of urban beachcombing … followed by literal beachcombing as well.

From London Bridge, David points downriver past the Tower of London and says, “During the Second World War, Nazi bombers used the Thames as a guide on their nightly raids. When moonlit, they called it a ‘silver ribbon of tin foil.’ It led from the English Channel right to our mighty dockyards. Even with all the city lights carefully blacked out, those bombers easily found their targets. Neighborhoods on both banks of the river went up in flames. After the war, the business district on the North Bank was rebuilt, but the South Bank … it was long neglected.”

Turning his back to St. Paul’s Cathedral, David points to a vast complex of new buildings showing off the restored, trendy South Bank, and continues, “Only recently has the bombed-out South Bank been properly rebuilt. There’s a real buzz in London about our South Bank.”

Then, saying, “The tide is low only for a couple hours a day … and this is perfect,” he surprises me by climbing down the embankment’s slippery-with-seaweed steps to a pebbly beach. Exploring the pebbly beach takes you away from the urban bustle and into a calm and peaceful environment.

Most don’t realize that the Thames is a tidal river. With each tide going out and coming back, the Thames replenishes beaches like these with historic wonders. In Victorian times (and even before), poor scavengers would “mudlark,” as this muddy treasure hunt was called, for anything they could sell. Today, mudlarking is a pastime for English beachcombers who see the Thames as an ever-changing archaeological site, with little treasures dating as far back as ancient Roman times awaiting discovery.

It’s low tide, and the beach is literally littered with history. Picking up a chunky piece of 500-year-old roof tile worn oval by the centuries, with its telltale peg hole still clearly visible, David explains that these red clay tiles were heavy, requiring large timbers for support. In the 16th century, when large timbers were required for shipbuilding for the Royal Navy, lighter slate tiles became the preferred roofing material. Over time, the heavy, red-clay tiles migrated from the rooftops to the riverbank … and into the pockets of beachcombers like us.

Like kids on a scavenger hunt, we study the pebbles. David picks up a chalky white tube. It’s the fragile stem of an 18th-century clay pipe. Back then, tobacco was sold with disposable one-use pipes, so used pipes were routinely tossed into the river. David lets it fall from his fingers. Thinking, “King George may have sucked on this,” I pick it up.

Climbing back to street level, David continues our walk as if our beachcombing were just a warm-up, and we prowl through the fascinating relics of the South Bank neighborhood that survived both German bombs and urban renewal. Scaling steep stairs into the attic of St. Thomas’ Church, we visit the Operating Theatre Museum, a crude surgical theater where amputations were performed in the early 1800s as medical students watched and learned. Down the street, we wander through the still-bustling Borough Market to see farmers doing business with city shopkeepers.

Walking through this area puts us in a time warp. David leads us into a quiet courtyard, where we look up at three sets of balconies climbing the front of an inn. He explains, “Coaching-inn courtyards like this provided struggling theater troupes – like young William Shakespeare’s – with a captive audience.”

A typical day in London can be spent at the Tower of London, Westminster Abbey, or the British Museum. But it can also be spent sifting through the tides of history both on and just beyond London’s South Bank.